The goals and purposes of this breed standard include: to furnish guidelines for breeders who wish to maintain the quality of their breed and to improve it; to advance this breed to a state of similarity throughout the world; and to act as a guide for judges. Breeders and judges have the responsibility to avoid any conditions or exaggerations that are detrimental to the health, welfare and soundness of this breed, and must take the responsibility to see that these are not perpetuated.

Absolute soundness and proper muscle tone is a must. Head properties should remain free of exaggeration so as to not compromise breathing and/or obstruct normal vision.
Breeders and judges are advised to always go for healthy and functional moderation, never for exaggeration.

There are various theories regarding the origin of the Pug breed, but the most generally accepted is that they originated in the Orient, and are a smooth-coated, longer-legged type of Pekingese. They have been well known in Europe since at least the 16th Century. After gaining favor with Royalty, the breed became very popular and even more well known.
The Pug was recognized by the United Kennel Club in 1918.

Decidedly square and cobby in symmetry, firmly knit, and with hard muscles, the Pug is often referred to as a ‘lot of dog in a small package’.

Serious Faults: Equally objectionable are dogs that are lean and leggy, and dogs that have a long body and short legs.

A charming and dignified breed, the Pug is intelligent and lively and makes a happy, even-tempered companion.

The head is massive and round, but never apple shaped.

The large, round skull has no indentation. It is covered with wrinkles.

The muzzle is short, blunt and square. The bottom jaw is wide, and does not turn upright.

Eliminating Faults: Excessive nose wrinkle that inhibits breathing, or a muzzle so short and blunt as to affect breathing.

A full complement of large, white teeth meet in a slightly undershot bite.

Eliminating Faults: Wry mouth. Teeth or tongue showing when the mouth is closed.

The very large, prominent, bold eyes are globular in shape. They are dark in color and very lustrous. Solicitous in expression; when excited, full of fire.

The small thin ears are soft, like black velvet. Of the two kinds of ears found in the Pug, rose (drop ears that fold over and back), and button (semi-erect), preference is given to the button ear.

Strong and thick, slightly arched at the crest and long enough to allow for proud head carriage.

The shoulders are well sloped.

The strong, straight forelegs are of moderate length. They are placed well under the body. Dewclaws may be removed.

The body is short and cobby with a wide chest and well-sprung ribs. The topline is level.

Strong and powerful to balance with the forequarters.

Well under the body. Strong, straight and parallel when viewed from the rear, with good angulation at the stifle joint.

The feet are not as long as a hare foot, nor so round as to be cat footed. The toes are well split up. Nails are black.

The high-set tail is curled as tightly as possible over the hip, with the double curl considered the ideal.

The fine, smooth, soft coat is short and glossy.

Acceptable colors include silver or apricot, fawn and black. The colors are clearly defined for strong contrast.

Markings are to be well defined, and as black and intense as possible. Markings are found on the muzzle, to include the mask; on the ears; as moles on the cheeks; as thumb marks or diamonds on the forehead; as a back-trace, which is a line extending from the occiput to the tail.

The desirable weight range, for dogs or bitches, is from 14 to 18 pounds.

Viewed from the front, the forelegs should rise and fall with legs well under shoulder, feet keeping directly to front, not turning in or out. From behind action is just as true. Using forelegs strongly, putting them well forward, with hind legs moving freely and using stifles well. A slight unexaggerated roll of hindquarters typifies gait. Capable of purposeful and steady movement.

(A dog with an Eliminating Fault is not to be considered for placement in a conformation event, nor are they to be reported to UKC.)
Heavy wrinkles that obstruct normal vision.
Excessive nose wrinkle that inhibits breathing, or a muzzle so short and blunt as to affect breathing.
Wry mouth. Teeth or tongue showing when the mouth is closed.
Pinched nostrils. Nostrils made obscure by nose wrinkle.
Eyes protruding or with visible white when looking forward. 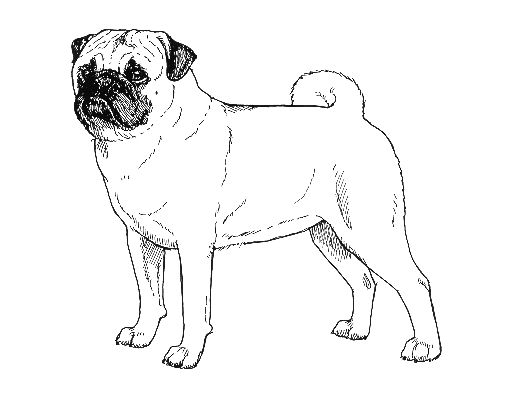