The Posavaz is an ancient hound breed indigenous to Croatia. Its origins are lost in the mists of time, but books bear witness to its antiquity. It is a good scenthound with excellent stamina, used to hunt hare and fox. It can also be used as a trailing leash hound.

The Posavaz was recognized by the United Kennel Club in 2006.

The Posavaz is an average sized, short coated scenthound with a red or wheaten colored coat that is marked with white.

Docile, good natured, and very attached to its owner, the Posavaz is also an enthusiastic hunter.

The head is long and narrow.

From above, the skull is oval shaped and not too wide. From the front, the forehead is slightly rounded. There is a frontal furrow, and the occipital crest is pronounced. The stop is visible but not abrupt.

The muzzle is quite long, and is the same width from eyes to nose. The nasal bone can be slightly convex. The lips are tight fitting, with black pigment.

The Posavaz has a complete set of evenly spaced, white teeth meeting in a scissors bite.

The broad nose is black or dark brown.

The large, dark eyes have tight fitting rims and a gentle expression.

The flat, thin ears are dropped and fit close to the cheeks. When drawn forward, they should reach the corner of the mouth.

The average length neck is slightly arched and clean.

The shoulder blades are long and sloping. The upper arms are strong and muscular.

The legs are straight and set well apart. They have strong bone. The pasterns are short and very slightly sloping.

The chest is long, broad and deep. The breastbone is not very pronounced. The withers are high, and the back is long and level. The loin is broad and muscular, and the croup is slightly rounded and sloping, with no prominence of hipbones. The belly is tucked up.

The upper thigh is medium length, broad and muscular. The lower thigh is sloping and longer than the upper thigh. The hock joint is strong, and the rear pasterns are vertical.

More cat than hare, with tight toes and elastic pads.

Set on the line of the back, broad at the base, reaching at most to the hock, the tail is carried in saber fashion and may have a brush.

The coat is straight, dense and close lying. It may be slightly longer on the underside of the tail, the belly and the backs of the legs.

Any shade of red or wheaten, but never brown or chocolate. There can be white markings on the head, neck, chest, throat, belly, lower legs and the end of the tail. White markings are sought after, but may not exceed one-third of the entire body.

Disqualification: Any color or marking color other than stated in the standard.

Even, flowing and fairly lively.

(A dog with a Disqualification must not be considered for placement in a conformation event, and must be reported to UKC.)
Unilateral or bilateral cryptorchid.
Viciousness or extreme shyness.
Albinism.
Undershot or overshot bite.
Blue eyes.
Pricked ears.
Any color or marking color other than stated in the standard. 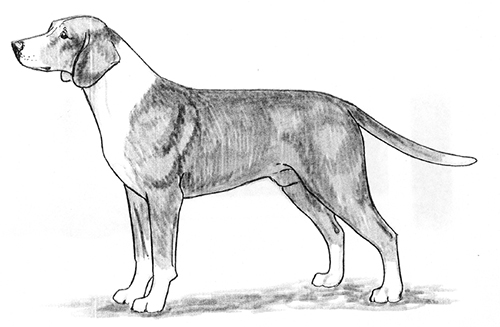