Curly- and wavy-haired working water dogs have been documented throughout Europe for centuries and are believed to have influenced the development of several breeds of dogs, including the Newfoundland and Chesapeake Bay Retriever. The Portuguese Water Dog has a long history of use in its homeland, where it was, and still is, a vital part of the fishing industry. Prized by their owners, the dogs are primarily used to herd fish into nets. Other duties include taking messages from boat to boat and retrieving escaping fish and lost objects.

The Portuguese Water Dog was recognized by the United Kennel Club in 1987.

The Portuguese Water Dog Is a well-balanced, robust, well-muscled dog of medium build. In proportion, he is slightly longer than tall. Muscular development, resulting from constant swimming, is noticeable. The breed is to be shown in a natural stance, with the front legs positioned so that the feet are slightly forward of the shoulders and the hind legs are positioned approximately under the rump.

Any deviations from the ideal are to be considered faults. Faults are to be penalized to the extent of the deviation and, most importantly, to the extent that the fault would reduce the dog's working ability.

The Portuguese Water Dog is one of exceptional intelligence and trainability, obeying any orders given by its master with willingness and pleasure. It is obedient both to those who care for it and to those for whom it works. It has a spirited disposition, is brave and independent, and resistant to fatigue. Its expression is hard and penetrating. The breed has splendid sight and a fair scenting capability.

The well-proportioned head is strong and wide.

When viewed in profile, the skull is slightly longer than the muzzle, and its curvature is more accentuated at the back than in the front. The occiput is well defined. The top of the skull appears to be domed and to have a slight depression in the middle. There is a central furrow in the prominent forehead for two-thirds of the distance between the forehead and the occiput. The stop is well-defined.

The muzzle is narrower at the nose than at its base. The strong jaws are neither under- nor overshot. The lips are thick, especially in the front.

There is no excess flew. The mucous membranes (including the roof of the mouth, under the tongue, and the gums), are well ticked with black or are quite black in black or white dogs. In brown dogs, color is in harmony with that of the coat. The teeth are not visible when the mouth is closed.

A full complement of strong, white teeth meet in a scissors or level bite. The canines are strongly-developed.

Medium size, round in shape, set well apart. They are brown or black in color. The fine-textured lids have black edges. The dark haws are not apparent. The eyes are never prominent or sunken.

The wide, fully-pigmented nose has well-flared nostrils. Nose pigment is black in dogs with black, black and white, or white coats. Brown dogs have nose pigment in harmony with coat color.

The heart-shaped ears are set well above the line of the eyes, the tips reaching above the lower jaw, not below. Ear leather is fine in texture. The ears are held nicely against the head except for a small opening at the back.

The straight, short, strongly-muscled, nicely rounded neck is held high. There is no mane and no dewlap.

The short, level back meets the croup smoothly. The well-formed croup is only slightly inclined. The hip bones are hardly apparent. The wide, deep brisket reaches down at the elbows. The ribs are long and well sprung. There is a good tuck-up.

The well-curved rump is long, with strongly-muscled buttocks.

The round feel are rather flat, with toes that are not too knuckled up nor too long. The webbing, made up of soft skin reaching to the tip of the toes, is well-covered with hair. The nails are held up slightly off the ground. Black nails are preferred, but white, brown or striped nails, in harmony with coat color, are acceptable. The center pad of the foot is very thick, while the others are normal.

The tail, which is of great help when swimming and diving, is not docked and has a medium setting. Thick at the base, it tapers down to, but does not reach below, the hock. When at attention, the tail is held in a ring, the front of which should not reach beyond the forward line of the hips.

The breed is single-coated and has no mane or ruff. The profuse single cost is made up of strong hair that covers the whole body evenly. It is thinner where the forearm meets the brisket and on the groin. There are two acceptable coat types: Wavy and Curly.

As soon as the hair grows long, the middle part, hindquarters and muzzle are clipped. The hair at the end of the tail is left at full length.

This clip gives a more natural appearance as well as a smooth, unbroken line. The entire coat is scissored or clipped, following the outline of the dog. A short blanket of coat, no longer than one inch in length, is left. That hair at the end of the tail is left at full length.

Acceptable coat colors include: black; white; various shades of brown; and combinations of black or brown with white. The nose, mouth and eyelid pigment must be black in a white dog. The skin is decidedly bluish in dogs with black, white, or black and white coats.

Height ranges are as follows: males, between 20 and 23 inches; bitches, between 17 and 21 inches.

Weight ranges are as follows: males, between 42 and 60 pounds; bitches, between 35 and 50 pounds.

At a walk, steps are short and lively. At a trot, movement is well balanced and forward striding. 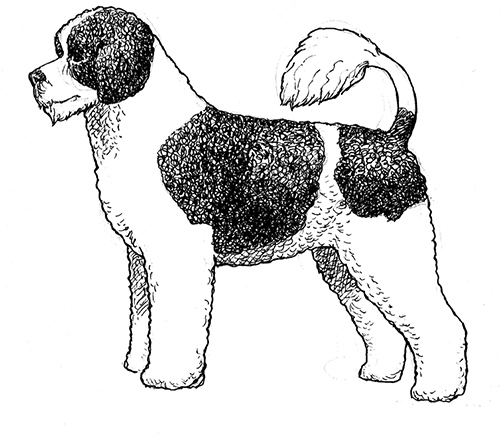 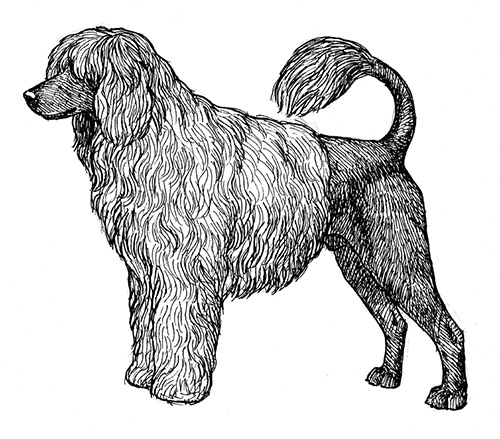