The probable origin of the Portuguese Podengo is from unspecialized, primitive hunting dogs that were obtained and distributed by Phoenician traders during their circumnavigation of Africa in 600 BC. These traders reached the Port of Gaul (Portugal) in the 700's BC. This is evidenced by artifacts found under the Lisbon Cathedral.

The Phoenicians traded and traveled extensively in the land between their famous city of Gadir (Cadiz) in Iberia and Cornwall in England (where they obtained the valuable tin needed to make bronze). It is entirely possible that the Phoenicians brought these valuable hunting dogs with them, both for trading and for their own use. Goods were also moved via river transport from the southern Iberian trading cities and stored safely on the island of Ibiza, which likely resulted in the distribution of the dogs in those areas as well.

When the Moorish (North African) soldiers and their people invaded and occupied Iberia (Spain, Portugal and France) for 400 years (from the early 8th century AD - to the mid- 12th Century AD*) they probably brought their own version of primitive dogs with them, thus influencing and defining the Iberian breeds such as the Podengo in Portugal and Podengo Galego in Spain.

The Portuguese Podengo was developed in three size varieties and two coat types, each suited to different climates, terrain, type of prey and hunting style.

The Grande was developed for deer and wild boar hunting. It will exhaust and hold down the prey and await the hunter's gun. The Grande is now very rare in its home country.

The Medio was developed for rabbit chasing, flushing, hunting and retrieval. Its hunting style includes catlike stalking and, similar to the Ibizan Hound; it often jumps above the prey before landing on or near it to flush it out of dense brush, rock crevices or burrows. It will dig if necessary to flush prey.

The Pequeno was also developed for flushing rabbits from cover. It is also a good vermin exterminator and was probably kept on board explorer ships after King Alfonso Henrique's defeat of the Moors.

2) Golden Age of the Moor by Ivan Van Sertima.

The Portuguese Podengo was recognized by the United Kennel Club July 1, 2006.

The Portuguese Podengo comes in three sizes: Grande, Medio and Pequeno (large, medium and small), and two coat varieties, smooth coated and wire coated. It is a breed that is free from exaggeration in all respects, with a wedge-shaped head, prick ears and a sickle-shaped tail. The Grande and Medio are nearly square in proportion, and the Pequeno is somewhat rectangular, with the body length from prosternum to point of buttocks approximately 20 percent greater than the height at the withers. In all sizes, the depth of the chest is one-half the height at the withers.

The breed is endowed with an acute sense of smell, sharp vision and keen hearing, and they use all of these senses when hunting. They are a very lively and intelligent breed and make excellent watch dogs and companions as well as outstanding hunters.

The head is a lean, well chiseled, broad based wedge when viewed either from the top or in profile. The planes of the skull and muzzle diverge.

The skull is relatively flat between the ears, with a prominent occipital bone. There are prominent superciliary arches and a barely perceptible frontal furrow. The stop is barely defined.

The muzzle is rounded in cross section, with a straight nasal bone. It is broader at the base than at the tip and shorter in length than the length of the skull. The lips are thin and close fitting, and always darker in color than the color of the coat.

The Portuguese Podengo has a complete set of evenly spaced, white teeth meeting in a scissors bite. Full dentition is required in the Grande.

Disqualifications: Undershot or overshot bite in any size.

The nose is tapered and prominent at the tip. It is always darker in color than the color of the coat.

The erect, mobile ears are set obliquely, with the outside edge at the level of the eyes. They are triangular in shape, and the leather is thin. The ears are of medium length, but with their length greater than their width at the base. They are held vertically or slightly tilted forward when alert.

The neck is straight, long, strong and well muscled. It transitions smoothly from head to body and is free from throatiness.

Long, lean and well muscled, with elbows held parallel to the body. The pastern joint is not prominent and the pasterns are short, strong and slightly bent.

The chest is deep to the elbow, and of medium width. The sternum slopes back and upward and there is moderate forechest. The ribs are sloping and slightly sprung. The back is straight and long and the loin is straight, broad and well muscled. The croup is straight or slightly sloping, broad and muscular. The entire topline, from ears to set on of tail, is smooth and flowing. The belly and flanks are lean and there is a slight tuck up.

The hindquarters are upright, well muscled and lean.

The upper thighs are long, medium in width, and well muscled. The lower thigh is long, lean and strong. The angulation at both the stifle and the hock is moderate, about 135 degrees. The rear pasterns are strong, short and straight and there are no dewclaws.

The feet are oval in shape with long, tight, slightly arched toes and tough pads.

The tail is set rather high and is long enough to reach to the hock joint. It is strong and thick, and at rest it falls in a slight curve between the buttocks. When the dog is in action it rises to the horizontal and is slightly curved, or it may go up to vertical in a sickle shape.

There are two varieties of coat:

which is short and very dense; and

which is medium in length, rough and harsh, not as dense as the Smooth coat, and without undercoat. The Wire coat produces a distinct beard.

The coat is to be shown in the natural state, groomed but not clipped or trimmed. The skin is thin and close fitting.

Yellow and fawn of any shade, either solid or with white patches or primarily white with patches of any shade of yellow or fawn.

Height at the withers for the PEQUENO is 8 to 12 inches with a weight range of 9 to 13 pounds.

(A dog with a Disqualification must not be considered for placement in a conformation event, and must be reported to UKC.)
Unilateral or bilateral cryptorchid.
Viciousness or extreme shyness.
Albinism.
Undershot or overshot bite in any size.
Tipped, bent or hanging ears.
Brindle, black and tan, tricolor or solid white. 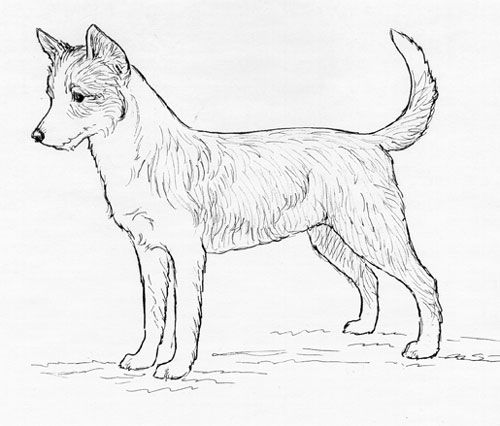 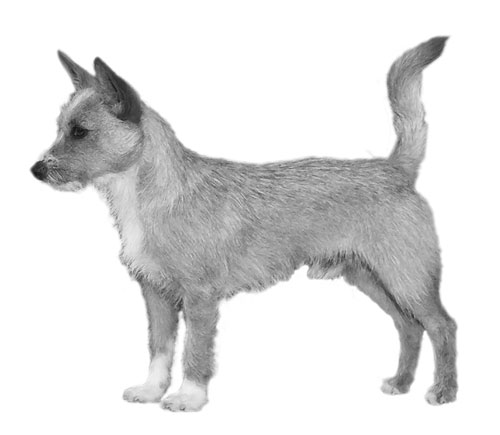