The Porcelaine is a medium sized scenthound breed, used to chase game to waiting guns, that was developed in France.

The Porcelaine was recognized by the United Kennel Club January 1, 1996.

A very distinctive looking, short haired French Hound with much quality in all the details of its structure.

The head is long, lean, and finely sculpted.

The skull is wide between the ears. The occipital crest is rounded. The forehead is flat, with moderate median furrow. The stop is marked, but not exaggerated.

The muzzle is long, and not square or pointed. The nasal bridge is straight, but ends very slightly arched near the nose. The upper lips cover the lower without being drooping. The edges of the lips are black.

The Porcelaine has a complete set of evenly spaced, white teeth meeting in a scissors bite.

The dark eyes are well sheltered under the superciliary arches. The expression is sweet and intelligent.

The thin ears are set on low. They are well curled inward, and end in a point. They should reach to the end of the muzzle.

The neck is fairly long and light, and has a lean dewlap.

The shoulders are long, sloping and muscular, without being heavy.

Fairly long, lean but not fine, very straight and parallel.

The chest is deep, but not overly wide. The ribs are rather long and lightly sprung. The withers are prominent, and the back is broad and straight. The loin is short, wide and muscular. The croup is slightly sloping, with the hipbones slightly prominent. The flanks are full but slightly tucked up.

The thighs are muscular and clean. The hocks are well let down and normally angulated.

Rather elongated and fine, with tight toes and tough pads.

The average length tail is fairly strong at the root, tapering to the tip, and carried in a curve. There is no brush.

White ground color with orange spots that never extend into a mantle. Orange ticking on the ears is characteristic.

Fault: Over or under size.

(A dog with a Disqualification must not be considered for placement in a conformation event, and must be reported to UKC.)
Unilateral or bilateral cryptorchid.
Viciousness or extreme shyness.
Albinism.
Blue eyes 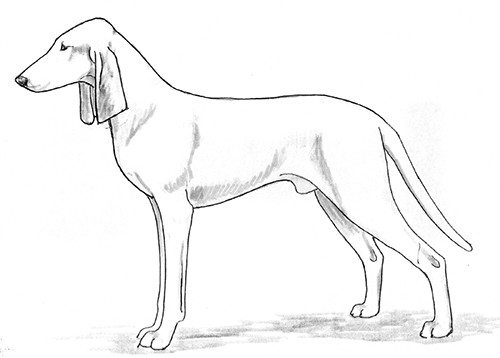