The Pomeranian is the smallest member of the Northern Breeds, and is a true Spitz type in miniature. Its name comes from Pomerania, once a part of Germany, from which the breed was imported to England. Originally, Pomeranians were much larger, weighing as much as thirty pounds; and were used as herding and working dogs. The present smaller size originated from undersized, but otherwise normal, pups that appeared in litters with normal-sized puppies.
The Pomeranian was recognized by the United Kennel Club in 1914.

The Pomeranian is a true toy Spitz, square in proportion, with a profuse, stand off double coat, a foxy face and small, high set, pointed ears.

The breed is alert, intelligent and lively. They are devoted to their owners, and make excellent companions.

Viewed from above, the head is wedge shaped.

One half the length of the skull, tapering to the end, but not snipy, with tight fitting lips. Pigment is black except in brown, blue or beaver colored dogs, where it is self-colored.

A full complement of strong, white teeth meet in a scissors or even bite. A few lacking premolars are tolerated.

The medium size, almond-shaped eyes are dark in color, and set on a slight slant. The expression is alert and fox-like. Pigmentation around the eyes must be black, except in brown, blue and beaver colored dogs, when it may be self-colored.

The small, round nose is black, except in brown, blue and beaver colored dogs, when it may be self colored.

The small, pointed ears are set high on the head, and carried erect.

The medium length neck is set well back on the shoulders to allow for high head carriage. It is slightly arched and covered with a profuse ruff.

The shoulder blades are long and well laid back, forming an angle of nearly 90 degrees with an upper arm of the same length.

The straight, parallel forelegs are of medium length and sturdy in bone. The elbow fits close to the brisket. The pasterns are straight and strong. Dewclaws may be removed.

The cobby body is well-ribbed, and rounded. The topline is level, and the back is as short as possible. The fairly deep chest is not too wide. Loin and croup are short and broad.

Angulation is in balance with the forequarters. The buttocks are considerably behind the set on of the tail.

Thighs are moderately muscled. Stifles are clearly defined, and moderately angulated. The rear pasterns are moderate in length and parallel to one another. Dewclaws may be removed.

The feet are very small and compact. This breed stands well up on its toes.

The tail is profusely covered with hair. Characteristic of the Pomeranian, the tail is set high, turns over the back and is carried flat.

The breed is double coated, with soft, dense undercoat and harsh, glistening outer coat that is long, straight and held off the body by the undercoat. The hair on the head, front of legs and feet is short and thick. On the rest of the body, it is abundant, with a good neck frill, or ruff, and profuse furnishings on the back of the legs and the tail. The breed is to be shown as naturally as possible. The trimming of unruly and excess hair is allowed on the feet, on the ears and from around the anus.

All of the following are acceptable colors, and are to be judged on an equal basis: any solid color; any solid color with lighter or darker shadings of the same color; any solid color with sable or brindle shadings; parti-color; sable; and black and tan.
Parti-color is white with any other color distributed in even patches on the body, and a white blaze on the head. Black and tan is a black base coat with sharply defined tan, or rust, appearing above each eye and on the muzzle, throat and forechest, on all the legs and feet and below the tail.
In UKC Conformation events, Pomeranians are not divided by color varieties.

Weight ranges from 3 to 7 pounds; the 4 to 5 pound range being the ideal.

Serious Faults: Over or under the allowed weight.

Action is sound, smooth, free and vigorous, and the dog maintains the same outline moving as he does standing.

(A dog with a Disqualification must not be considered for placement in a conformation event, and must be reported to UKC.)
Unilateral or bilateral cryptorchid. Viciousness or extreme shyness.
Albinism. 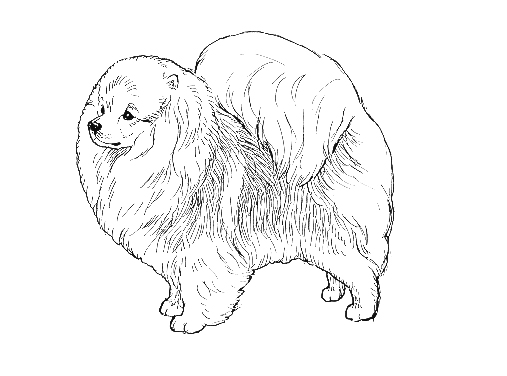