An ancient breed of Egyptian origin, its ancestors were probably brought to the Canary Islands by the Phoenicians, the Greeks, the Carthaginians and the Egyptians themselves. The breed dates back about seven thousand years. It hunts rabbits and ferrets by sight, scent and sound and has extraordinary survival skills.

The Podenco Canario was recognized by the United Kennel Club July 1, 2006.

A medium sized, slender, light breed that carries no excess fat. The ribs, spinal column and hip bones are readily apparent and the musculature is very lean and well developed.

Courageous, enthusiastic and energetic, not at all aggressive, and very attached to his master.

The skull is flat, longer than wide, and has a marked occipital crest. The stop is barely marked.

Longer than the skull, shaped like a blunt cone. The lips are fine and tight, the same color as the nose.

The Podenco Canario has a complete set of evenly spaced, white teeth meeting in a scissors bite.

Small, almond shaped, and obliquely set. Dark amber in color, the depth depending on the coat color. The expression is intelligent and noble.

Large and prick, broad at the set-on, and tapering to a point. At rest, they tip backwards.

Well muscled, straight, flexible and rounded, with no dewlap.

The angulation of the shoulder blade and upper arm is approximately 110 degrees.

The body is slightly longer than tall. The chest is well developed but does not come down to the elbow. The sternum does not protrude in front of the point of the shoulder. The ribs are oval. The back is strong and the loin is somewhat elongated. The hipbones are visible. The belly is drawn up but not whippety.

The angulation of the pelvis and femur matches that of the shoulder blade and upper arm.

The hind legs are vertical and straight with strong musculature. Angulation at the stifle is 120 degrees and at the hock it is 140 degrees. The hocks are quite high.

Set rather low and reaching just below the hock. It is carried hanging or in a sickle shape. It is a little tapered at the tip, which is generally white. The tail should never be curled or carried too high when moving.

Any combination of red and white, with the red ranging from orange through mahogany. 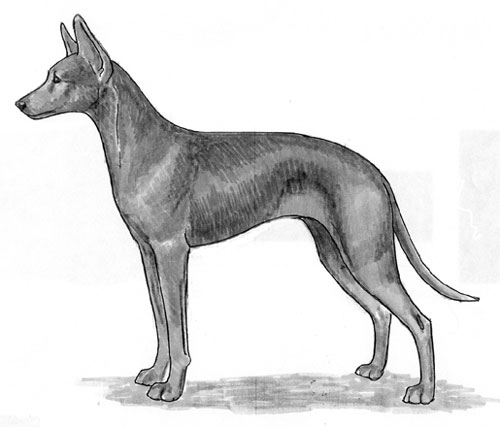