Of the seven breeds of UKC registered Coonhounds, the Plott Hound and the American Leopard Hound do not trace their ancestry to the foxhound. And, of those seven breeds, we can be most certain of the Plotts heritage and the men most responsible for its development.

The ancestors of todays Plott Hounds were used for boar hunting in Germany many years ago. Jonathon Plott left his native Germany and came to this country in 1750. He brought a few wild boar hounds with him. These dogs had been bred for generations for their stamina and gameness. Plott and his family settled in the mountains of western North Carolina.

In those days there were no wild boars in this country. Jonathon Plott used his dogs for hunting bear.

Plott supposedly kept his strain entirely pure, making no outcrosses. In 1780, the Plott pack passed into the hands of Henry Plott.

Shortly after that time a hunter living in Georgia who had been breeding his own outstanding strain of leopard spotted bear dogs heard of the fame of the Plott Hounds and came to North Carolina to see for himself. He was so impressed that he borrowed one of Plotts top stud dogs for a year to breed to his own bitches. This single cross is the only known instance of new blood being introduced into the Plott Hound since they first came to this country.

Other crosses possibly took place around the year 1900. G.P. Ferguson, who was a neighbor of the Plott family in North Carolina in those days, was a major influence on the Plott breed. He made a careful study of the Blevins hounds and the Cable hounds of that era. To what extent he used these bloodlines in his Plott breeding program is not known.

The Plott Hound was first registered with the United Kennel Club in 1946. Todays Plotts are known for their great courage and stamina. They have a clear voice that carries well.

The Plott is a beautiful, strongly build yet moderate hound, with a distinct brindle colored coat. His appearance suggests the capacity for speed, stamina and endurance.

This breed is active, fast, bright, kind, confident and courageous. They are vicious fighters on game, have a super treeing instinct and take readily to water. They are alert and quick to learn. Voice is open trailing, bawl and chop.

The head is moderately wide in skull and somewhat flat on top. The muzzle is of medium length, strong but not squared off in profile.

Prominent, set moderately wide apart in skull, brown or hazel in color. Eyelids tight, with no drooping. Expression is kind and intelligent.

Set moderately high and of medium length, soft to the touch, with no erectile power.

Forelegs perfectly straight and well covered with smooth muscles. Pasterns short, strong and nearly upright. Shoulders are muscular and sloping to indicate speed and strength. Length of leg from elbow to ground is approximately one-half the height at the withers.

Chest is deep to elbow and moderately broad, giving adequate lung space. Ribs are nicely sprung, tapering to a graceful tuck-up at the flank. Back is broad, well muscled, level. Never roached. Loins muscular and slightly arched. Overall proportion is square or slightly longer than tall, measured from point of shoulders to point of buttocks and withers to ground.

Hips are smooth, round, proportionately wide and well muscled. Legs are strong and muscular above the hock, with moderate angulation at the stifle and hock joints. Short and straight from hock to heel, never cow hocked. Without rear dewclaws.

Round, cat-like foot, with deep pads and well-knuckled toes.

Rather long, moderately heavy, strong at the root and tapering to the end. Some brush. Carried free, well up and saber like.

Fine to medium coarse in texture. Short or medium in length, with a smooth and glossy appearance.

Any shade of brindle (a fine streaked or striped pattern of dark hair imposed on a lighter background, or lighter streaks or stripes on a dark background); Brindle with a black saddle and black with brindle trim, solid buckskin and solid black. Some white on chest and feet is permissible, as is a graying effect around the jaws and muzzle. All things being equal, brindle is preferred.
Disqualifications: Albinism. Any color or combination of colors other than described.

Quick and agile, with head and tail carried well up.

(A dog with a Disqualification must not be considered for placement in a bench show/conformation event, and must be reported to UKC.)
Any color or combination of colors other than described.
Undershot or overshot.
Unilateral or bilateral cryptorchid.
Viciousness or extreme shyness.
Albinism.
Deaf.
Blind. 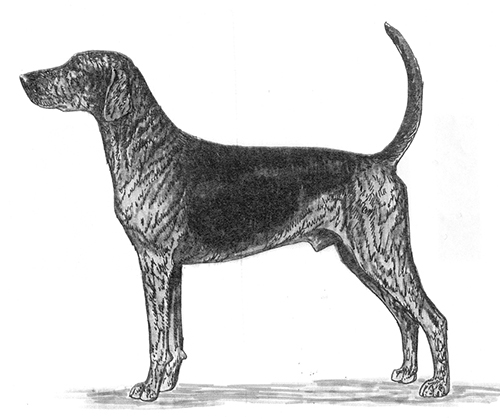