The Petit Basset Griffon Vendeen was recognized by the United Kennel Club in 1992.

The dog presents a rough and unrefined outline, with a compact, rather tousled appearance, with no exaggeration of any features, and his parts in balance. Altering the rough outline and casual appearance destroys the quintessence of breed type.

A correctly proportioned dog is approximately 50% longer than tall when the length of the dog is measured from sternum to buttocks as compared to the height measurement, from withers to ground. Strong bone with substance is in proportion to the overall dog.

The dog’s head is carried proudly, displaying definitive long eye¬brows, a beard and a mustache. The strong, tapered tail is carried like a saber, alert and in readiness.

To fulfill his hunting heritage, the PBGV must be bold and vivacious in character, compact, tough and robust in construction. The breed has an alert outlook, a lively bearing and a good voice, which is used freely. Expression is alert, friendly and intelligent. They are happy, extroverted and independent, yet willing to please.

Head size must be in balance with the overall dog. Head length is more than width in an approximate ratio of 2:1. The head is carried proudly.

When viewed from the front, the domed skull is oval in shape, and is well cut away under the eyes. The occiput is well developed. The stop is clearly defined.

The length of the muzzle is slightly shorter than the distance measured from the stop to the occiput. The strong underjaw is well developed. The lips are covered with long hair that forms a beard and mustache.

A full complement of large, strong, white teeth meet in a scissors bite. A level bite is acceptable.

The large, dark eyes show no white. Long, forward-standing eyebrows surmount, but do not obscure, the eyes. The lower eyelids are tight, showing no haw. The expression is intelligent.

The large nose has wide nostrils. It is black, although a brown nose is acceptable in orange and white dogs.

The supple, narrow, fine ears are covered with long hair, and are set low, not above the line of the eyes. They fold inward, ending in an oval shape, with the leathers reaching almost to the end of the nose

The long, strong, clean neck flows smoothly into the shoulders.

The shoulders are clean and well laid back. The upper arm is approximately equal in length to the shoulder blade. The elbows are held close to the body.

Serious Fault: Any tendency to knuckle over.

The muscular body is somewhat longer than tall. In profile, the distance measured from the withers to the ground and from the croup to the ground should be equal. The back is level. There is a slight arch over the strong, muscular loin, which is rounded about the lateral axis of the dog. The chest is deep, with moderately rounded ribs that extend well back. The sternum is prominent.

Good bend of stifle. The second thigh is well defined. Hocks are well angulated. Rear pasterns are short, and perpendicular from the hock to the ground.

The feet are not too long. The pads are hard and tight. Nails are strong and short. A slight turnout of the front feet is acceptable, but hind feet must point straight ahead. Dewclaws may or may not be removed.

The medium length tail is set on high. Strong at the base, it tapers evenly. It is only slightly curved; proudly carried like the blade of a saber, at about 20 degrees to the aft of the vertical. The tip of the tail reaches approximately to the hock joint when curved downward. The tail is well furnished with hair.

The breed is double coated. The coat is rough, long and without exaggeration, and harsh to the touch. The undercoat is shorter and thicker. The coat is never silky or woolly.

The Petit Basset Griffon Vendeen is to be shown untrimmed, in as natural a state as possible. Any indications of scissoring for the purposes of shaping or sculpting are to be severely penalized.

White, with any combination of lemon, orange, tricolor and grizzle markings.

Height is measured at the withers. Males and females should measure between 13 and 15 inches, with an acceptable tolerance of a half-inch in either direction.

The PBGV is not a large, heavy breed. A male at 15 inches will weigh no more than approximately 45 pounds. Proportion and balance are of the essence.

Movement is free at all speeds, giving the impression of an active hound, capable of a full day’s hunting. Front action is straight, reaching well forward. Going away, the hind legs are parallel, and have great drive. As speed increases the dog single tracks.

(An Eliminating Fault is a Fault serious enough that it eliminates the dog from obtaining any awards in a conformation event.)
Height, measured at the withers, of more than 15½ inches.

(A dog with a Disqualification must not be considered for placement in a conformation event, and must be reported to UKC.)
Unilateral or bilateral cryptorchid.
Viciousness or extreme shyness.
Albinism.
Overshot or undershot bite.
Wall eyes. 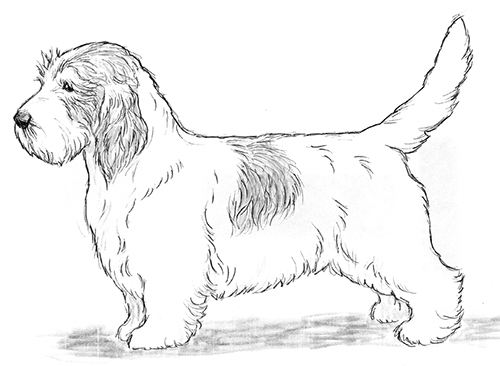