The Peruvian Inca Orchid is an ancient breed, thought to have been in existence since A.D 750. When the Spanish conquered Peru, these hairless dogs were found in the Inca homes amidst the Orchids, therefore the Spanish named them “Perros Flora”, or “flower dog”. Little has changed about the breed since it was first discovered.

The Peruvian Inca Orchid was recognized by the United Kennel Club in 1996.

The Peruvian Inca Orchid is a medium-sized, elegant Sighthound breed. They give the appearance of speed, strength and stamina, with no trace of coarseness. They are square in proportion, though females may be slightly longer in body, with good length of leg. The hairless and the coated dogs are identical except for ear carriage, and they can be born in the same litter. The breed comes in many skin and coat color combinations.

The breed is lively and alert; and when mature they are calm and quiet. Intelligent, independent thinkers, they make excellent guard and watchdogs, as they are wary of strangers but devoted to their owners.

The head is broad between the ears and tapers towards the nose. The toplines of the skull and muzzle are parallel. There is a barely perceptible stop.

The skull is slightly rounded, with no prominence of occiput.

The muzzle is equal in length to that of the skull, with a straight nasal bone. The lips are very tight and clean.

The Peruvian Inca Orchid has a scissors or level bite, and normally developed canine teeth.

Missing teeth in the hairless dogs should not be penalized. The coated variety should have full dentition.

Nose color harmonizes with coat color, black in the darker colored dogs, and self-colored in the lighter colored dogs. Complete pigment is preferred.

In the hairless dogs, the ears are medium large, broad at the base, tapering to a point, and carried erect. They may be folded when the dog is at rest, gaiting, or coursing. In the coated dogs, the ears may be semi prick, with the tips falling either forward or out to the side. The ears are set fairly high on the skull but not too close together.

Long and curved, graceful yet well muscled. Free from dewlap.

The shoulder blades are clean and moderately angulated with the upper arms, forming an angle of approximately 110 degrees.

Long, straight and strong, with the elbows held close to the body. The pasterns slope slightly off the vertical. Dewclaws may be removed.

The chest is moderately broad and deep, reaching nearly to the elbows. Ribs are lightly sprung, not flat. The topline is straight, with a slight arch, due to muscling, over the loin. The croup is rounded. There is good tuck-up.

The hindquarter muscles are well-rounded and elastic. The moderate angulation matches that of the forequarter.

Straight from hip to foot when viewed from behind. Rear dewclaws must be removed.

Hare shaped, with webbing between the toes and strong pads.

Set on low, thick at the root and tapering toward the tip. At rest, it reaches to the hock and has a slight upward hook at the tip. When in motion, the tail may be carried curved above the topline, but never curled over the back.

The skin is smooth and elastic. In the hairless dogs, there can be small amounts of hair on the head, legs and tail. In the coated dogs, the coat is single, moderately coarse and short to medium in length. Longer, softer furnishings can appear on ears and tail. The coat may be straight or slightly wavy.

Color ranges from black through slate, blue-black, the entire range of grays, browns and blonds, either uniform or showing patches.

Because they are moderately angulated, the Peruvian Inca Orchid moves with a rather short, quick step that is soft and flexible. There is a tendency to single track. 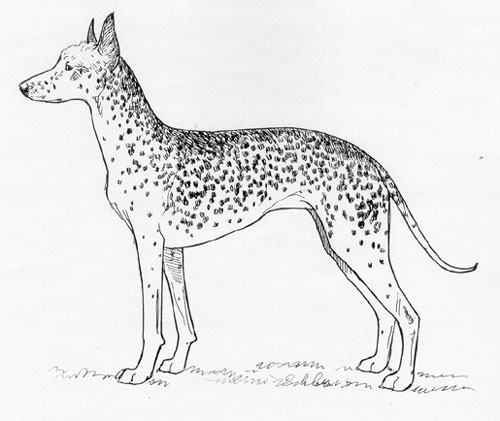