The ancestors of the Perro de Presa Canario were probably brought to the Canary Island by the Spanish Conquistadors, and coexisted with indigenous cattle dogs from the beginning of the fifteenth century. These dogs served many purposes. They guarded the farms, helped catch and hold cattle, and exterminated wild or stray dogs. In the 1940s, the breed began to decline in numbers. It was revived again in the 1970s, when reputable breeders developed and bred Presas true to their original size and character.

The Perro de Presa Canario was recognized by United Kennel Club on January 1, 2003.

The Presa Canario is a moderately large, powerfully constructed dog with a harsh-textured, flat coat. The head is massive and cuboid. Ears are set just above the line of the eye and may be cropped, naturally pendent or rose. The body of the Presa Canario is slightly longer than its height at the withers, with a broad, deep chest, but females may be slightly longer and possess somewhat less rib spring than the males. Skin is thick and elastic. The distance from the withers to the elbow is roughly equal to the distance from the elbow to the ground. The tail is very thick at the base, and tapers to a point. The tail is moderately high and reaches to the hock. The overall impression is that of an imposing, solid guard dog.

The essential characteristics of the Presa are those which enable it to drive and hold cattle, and to guard its home and family. These tasks require a powerful, agile, courageous dog with a large head and powerful jaws. The Presa is extremely affectionate, docile and well behaved with its owner and family, but is wary of strangers and aggressive with other dogs.

The head is massive, cuboid (cube-like) in shape. When viewed from the side, the top lines of the skull and muzzle are roughly parallel to one another, and are joined by a well-defined, but not abrupt, stop. When the dog is alert, the skin forms several symmetrical wrinkles in the median furrow.

The skull is cube-shaped, broad and slightly domed, but without occipital protuberance. The width of the skull is about 3/5 of the length from occiput to nose. Zygomatic arch is very pronounced and there is a deep median furrow that diminishes in depth from the stop to the occiput. Cheek muscles are well developed without being pronounced.

The muzzle forms a smaller cube that tapers just slightly from stop to nose. The length of the muzzle is roughly 2/5 of the length of the head, while the width is about 2/3 as wide as the skull. The bridge of the muzzle is flat and straight. Lips are moderately thick and pendulous with black pigment. The top lip should fall naturally over the lower without excessive flews. Viewed from the front, the lips form an inverted “V” where they join.

The Perro de Presa Canario has a complete set of evenly spaced teeth, set in a wide jaw. A scissors or reverse scissors bite is preferred. A level or slightly undershot bite is acceptable.
Fault: Missing any tooth other than the first premolar.

Eyes are slightly oval, set level and wide apart, and range in color from medium to dark brown, in accordance with coat color. Eyelids are close-fitting and black.

Ears are of medium size, set just above the line of the eye and wide apart, and covered with short, fine hair. Ears may be natural or cropped. The natural ears may be pendent or rose. Pendent ears drop effortlessly to the sides of the head, and rose ears are close fitting. Cropped ears are erect.

The neck is cylindrical, thick, well muscled, and slightly shorter than the length of the head. Loose folds of skin at the throat form a slight dewlap.

Shoulders are muscular and well laid back. The upper arm is of good length and well-angled so that the front legs are set well behind the point of the shoulder. The elbows set slightly out from the body.

A properly proportioned Presa is about 20% longer (measured from prosternum to point of buttocks) than tall (measured from the withers to the ground), and length of the front leg (measured from point of elbow to the ground) should approximately equal one-half of the dog’s height. Females may be slightly longer in body. The withers are slightly elevated. The back and loin are strong but without prominent musculature. The topline ascends slightly toward the croup which is just slightly higher than the withers. The croup is of medium length, wide and slightly sloping. Females normally have slightly wider croups. The loin is moderately short, muscular and deep, with moderate tuck-up. The ribs are well arched. The brisket extends to the elbow. The chest is broad and deep with well developed pectoral muscles. Ideally, the circumference of the deepest part of the chest should equal almost 1.5 times the dog’s height at the withers.

Hindquarters are powerful and well muscled. In profile, the croup is sloping. The angulation of the hindquarters is moderate. When the dog is standing, the rear pasterns are short, perpendicular to the ground and, viewed from the rear, parallel to one another.

Feet are round, compact, cat-like. Rear feet are slightly longer than the front. Pads are well developed, tight, black, not splayed. Nails are solid color, white or black depending on coat color of toes.

The tail is a natural extension of the topline, set moderately high. It is thick and muscular at the base, and tapers to a point. A tail of the correct length extends to the hock but never below. Tail carriage ranges from a pump handle tail when the dog is relaxed to a saber tail when the dog is alert.

The Presa has a short, flat single coat that is harsh in texture. It is very short and fine on the ears and slightly longer on the withers and the back of the rear hindquarters.

Disqualification: Any color or pattern other than those described.
Serious Faults: Satiny, fine coat.

Any shade of fawn, black, and brindle in any combination of these colors. The face must have a black or dark brown mask that does not extend over the eyes, with or without a white blaze or patch on the head. Minimal white markings may appear anywhere between the chest and the throat, or on the toes.

Serious Fault: Mask that extends over the eyes.
Disqualifications: Absence of dark mask, white markings covering more than 20% of the dog, coat color or pattern other than described above.

When trotting, the stride is long, effortless and well coordinated and the tail is carried above the topline.

(A dog with a Disqualification must not be considered for placement in a conformation event, and must be reported to UKC.)
Unilateral or bilateral cryptorchid.
Viciousness or extreme shyness.
Overshot bite.
Blue, gray, or yellow eyes.
Non-matching eyes.
Croup lower than withers.
Docked tail.
Absence of dark mask.
White markings covering more than 20% of the dog.
Coat color or pattern other than described in “Color” paragraph above.
Albinism. 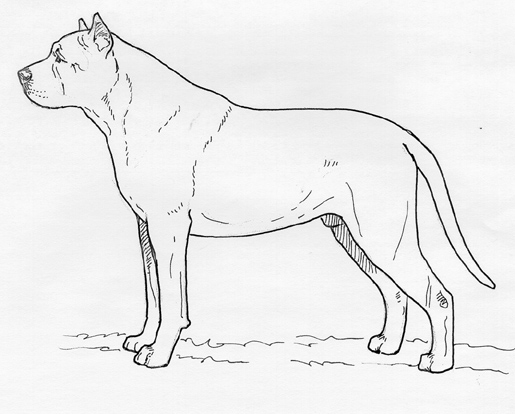