The Pembroke is one of two Welsh Corgi breeds, the other being the Cardigan. Several theories exist regarding the origin of these very old breeds, one being that they were brought to Wales by the Celts. Another theory is that they are descended from the Swedish Vallhunds, which were crossed with the local Welsh herding dogs. The Pembroke is a herding dog, originally used to drive cattle to pasture.

The United Kennel Club recognized the Pembroke Welsh Corgi in 1959.

The Pembroke Welsh Corgi gives the impression of substance and stamina in a small space by virtue of its low-set, strong, sturdy build. It is an alert, active breed, bold in outlook.

The head is foxy in shape and appearance.

The fairly wide skull is flat between the ears. The stop is moderate. The cheeks are very slightly rounded, not filled in below the eyes.

The foreface is nicely chiseled, forming a somewhat tapered muzzle. The distance from the occiput to the center of the stop is greater than the distance measured from the stop to the nose tip. The proportions for these measurements are five parts of the total distance being delegated to the skull and three parts to the foreface. The lips are black and are tight, with little or no fullness.

The medium size eyes are oval in shape. Eye color is brown, blending with the color of the coat.

The black nose is fully pigmented.

The firm, medium size ears are erect, tapering slightly to a rounded point. They are mobile, reacting sensitively to sounds. Ideally, an equilateral triangle is formed when a line is drawn from the nose tip, through the eyes, to the ear tips and across.

The fairly long neck is of sufficient length to provide overall balance. It is slightly arched and clean, blending well into the shoulders.

The forelegs are short and as straight as is possible with ample bone that is carried right down to the feet. The elbows fit close to the body. They are well set back, allowing a perpendicular line to be drawn from the tip of the shoulder blade, through the elbow, to the ground.

Faults: Any exaggerated lowness of the chest that interferes with freedom of movement. Lack of brisket. Extreme body length. Cobbiness.

Strong and flexible, well angulated at the stifle.

Short, with ample bone carried right down to the feet. Rear pasterns are parallel when viewed from behind.

The two center toes of the oval-shaped feet are slightly longer than the two outer toes. The arched feet have short nails and strong pads and turn neither in nor out.

Faults: Too round, too long and narrow, splayed feet.

Short, either a natural bob or docked. A full length natural tail is set on line with the topline, and may be carried out behind the dog, straight up perpendicular to the back or curved over the back in a graceful sickle.

Faults: A tail that is curled tightly and carried on the back; a straight tail that snaps flat against the back.

Medium length and straight, double, with good texture to the outer coat. The overall length varies, with a slightly longer and thicker ruff found around the neck, chest and on the shoulders. The hair on the body lies flat. The hair on the back of the forelegs and underparts is slightly longer, and is somewhat longer and fuller on the rear of the hindquarters. A seasonal lack of undercoat is not to be severely penalized, providing the hair is glossy and healthy. The Pembroke Welsh Corgi is shown in natural condition. No trimming is permitted except to tidy the feet and, if desired, to remove the whiskers.

Very Serious Faults: Fluffies - an extremely long coat that has exaggerated feathering on the ears, chest, legs and feet, underparts and hindquarters. The trimming of this type of coat does not make it any more acceptable.
Serious Faults: A wiry, tightly marcelled coat. An overly short, smooth, thin coat.

Acceptable outer coat colors include the self colors of red, sable, fawn, black and tan; with or without white markings. White on the legs, chest, neck (either in part or as a collar), muzzle, underparts and as a narrow blaze is acceptable.

Very Serious Faults: Whitelies: white body color, with red or dark markings. Mismarks: self-colored dogs with any area of white on the back between the withers and tail, on the sides between the elbows and the back of the hindquarters, or on the ears. Black dogs with white markings, but no tan trim. Bluies: any colored portion of the coat that has a distinct bluish or smoky cast. This coloring is associated with extremely light or blue eyes and liver or gray eye rims, nose and lip pigment.
Disqualification: Albinism.

Height, measured from the highest point of the withers to the ground, should be 10 to 12 inches.

Weight is in proportion to size, but is not to exceed 30 pounds for dogs and 28 pounds for bitches. In ideal working condition, the preferred medium size dog, with correct bone and substance, weighs approximately 24 to 27 pounds, with bitches weighing approximately 22 to 25 pounds.

Free, smooth movement is of utmost importance. The forelegs reach well forward without too much lift. The long, free stride is allowed by a correct shoulder assembly and well-fitted elbows. The hind legs drive well under the body, moving in line with the forelegs. The hocks turn neither in or out.

When viewed from the front, the legs do not move in exact parallel planes; they incline slightly inward to compensate for the characteristic shortness of the legs and chest width. The feet travel parallel to the line of motion with no tendency to swing out, cross over or interfere. 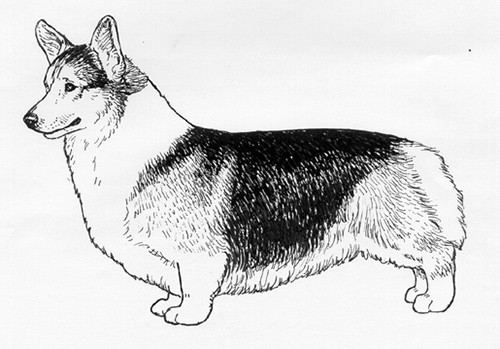