Any departure from the following should be considered a fault, and the seriousness with which the fault should be regarded should be in exact proportion to its degree and its effect upon the health and welfare of the dog (and on the dog’s ability to perform its traditional work), which includes acting as a companion.

Absolute soundness and proper muscle tone is a must. Excessive coat is unnecessary. Head properties should remain free of exaggeration so as to not compromise breathing and/or obstruct normal vision.
Breeders and judges are advised to always go for healthy and functional moderation, never for exaggeration.

The origin of the Pekingese breed has been lost in the mists of time, but they are believed to be descendants of the ancient, lion-like Chinese "Fo Dogs" that were believed to ward off evil spirits. They were a favorite of the Chinese Imperial Court and only select people were allowed to own them.
The Pekingese was recognized by the United Kennel Club in 1948.

The Pekingese is well-balanced and lion-like in appearance, with an alert, intelligent expression. The breed is small, thickset and double-coated. The breed carries itself with an air of dignity and quality. It should be free of respiratory distress caused from excessive face/nose wrinkles or insufficient nostrils and able to move freely and soundly. In proportion it is slightly longer than tall.

A fearless and loyal breed, rather aloof but never timid or aggressive.

The head is large, proportionally wider than it is deep.

The skull is wide and flat between the ears, never domed. There is a pronounced stop that is accented by a slight nose wrinkle.

Must be evident and allow for comfortable breathing. Proportionately short, in comparison to the size of the dog, and wide, with a firm underjaw. There is a wrinkle, preferably broken, that extends from the cheeks to the bridge of the nose in an inverted ‘V’, without being excessive or affecting the dog’s breathing. The wrinkle should not obscure either the eyes or the nose. The black lips meet evenly and fully cover the teeth.

A full complement of strong, white teeth meet in an undershot bite. A strong underjaw is essential.

Prominent, but not bulging, round eyes are dark and lustrous. They are set far apart, and no white shows. The eye rims are black.

The heart-shaped ears have long feathers. They are set level to the skull, and carried close to the head. The ear leather is never long enough to come below the muzzle.

Serious Fault: Ears that come below the muzzle.

Shoulders and upper arms are well laid back and fit closely to the body.

Short and thick, with heavy bone. Slightly bowed between the pastern and the elbow, which should be held close to the body. The pasterns are moderately sloping, and the front feet turn out slightly. Dog stands well up on feet, not down on pasterns.

Serious Faults: Weak pasterns. Pasterns sloping sharply. Standing down on pasterns.
Body
Short, heavier in front than rear, tapering to a distinct waist. The chest is broad, and the ribs are well sprung and slung between the forelegs. The topline is level.

Strong and well-muscled. The hind legs have slightly less bone than the forelegs, and moderate angulation. Stifles are well defined. Hocks are firm and tight. Viewed from behind, the legs are strong, parallel and fairly close together. Feet point straight ahead.

Fault: Dog whose rear is weak or excessively narrow.

Large and flat. Not round. The toes are well feathered. The Pekingese stands well up on his feet, not on his pasterns.

Fault: Dog standing on pasterns and not on feet.

The tail is set high, and lies tightly over the back to either side.

The breed is double coated. The long, straight outer coat is rather coarse, while the undercoat is soft and dense. Feathers are found on the thighs, legs, tail, ears and toes. The mane forms a ruff or frill around the neck and extends beyond the shoulder blades. The whole of the coat should not affect the dog’s movement, nor appear cumbersome. Should be shown groomed minimally.

All colors and markings are equally permissible.

Pekingese look small but should feel surprisingly heavy when picked up. Ideal weight should not exceed 14 pounds.

Serious Fault: Over 14 pounds in weight.

Soundness is of the utmost importance. Movement is slow and dignified, with a roll in the front quarters. Action behind is close.

(A dog with an Eliminating Fault is not to be considered for placement in a bench show/conformation event, nor are they to be reported to UKC.)
Heavy wrinkles that affect breathing and/or obstruct normal vision.
Muzzle so short as to affect breathing.
Teeth or tongue showing when the mouth is closed.

(A dog with a Disqualification must not be considered for placement in a bench show/conformation event, and must be reported to UKC.)
Unilateral or bilateral cryptorchid.
Viciousness or extreme shyness.
Albinism.
Overshot bite.
Wry mouth.
Entropionism, ectropionism. 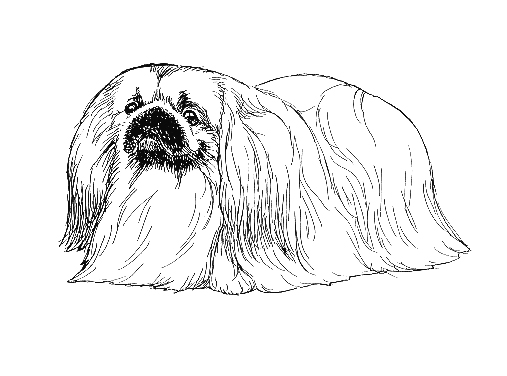