The Patterdale Terrier is descended mainly from the black, smooth-coated Fell Terrier which was developed in the harsh environment of Northern England. The Fell Terriers were used to control vermin that were predatory on sheep. They were bred to bolt the quarry out of the den or to dispatch it if it chose to fight. Its characteristics result in an extremely game, ‘tough as nails’ dog.

The Patterdale Terrier was recognized by the United Kennel Club on January 1, 1995.

A sturdy, tough, active little terrier that presents a compact, balanced image. As a working terrier, it has to be capable of squeezing through very small passages underground to follow its quarry. The Patterdale’s chest should be capable of being spanned behind the shoulders by an average man’s hands with the fingers of both hands touching.

Patterdales stand between 10 and 15 inches tall at the withers.

This breed is worked far more than it is shown, and breeders are primarily concerned with the practicality of the breed. This terrier must have a strong neck, powerful jaws and teeth, the fortitude to hold its quarry at bay, and the ability to squeeze into tight burrows. He must have great flexibility and endurance.

Scars resulting from wounds received while working are considered honorable and are not to be penalized.

The Patterdale is an extremely courageous working terrier, traditionally used to go to ground. Patterdales are extremely willing to work and have a high desire to please. They are very active and have a strong prey drive; and though they should be peaceful with humans, livestock and other dogs, they are not a dog for the average pet owner. They require an owner with a sense of humor and one that understands and can tolerate a real terrier temperament.

The head is strong and powerful, in balance with the size of the dog, and wedge or trapezoidal shaped when viewed from the front. The length of the skull and the muzzle are equal, or with the muzzle slightly shorter than the skull. Jowl and muzzle have good substance. The muzzle should be strong, never appearing snipy or weak.

A full complement of strong, white teeth meet in a scissors or level bite. Teeth that are broken, or incisors that are lost, due to working, are not to be penalized.

The eyes are set squarely in the skull and fairly wide apart. As an earth-working terrier, it is important that the eyes not protrude or bulge. Eye color should be in harmony with the coat color, but never blue.

The ears are triangular in shape, and small to moderate in size, folding tightly just above the skull. The tips point to the outside corner of the eye.

Black except in the liver/chocolate-colored dogs, which have a brown nose, commonly referred to as “red”.

The neck is clean, muscular and of moderate length, widening gradually from the nape and blending smoothly into the shoulders.

Faults: Ewe neck, neck too short or too thick.

The shoulder is long, sloping and well laid back.

The forelegs are strong and straight, with good bone. The elbows are set close to the body but move freely. Pasterns are powerful and flexible.

Faults: Bowed legs; fiddle front; down in pasterns; toes turned out; knuckling over or any other misalignment of joints; out at the elbow.

In proportion, the body should be square or slightly longer than tall, measured from the point of the shoulder to the point of the buttocks, and from the withers to the ground. The back is of moderate length and level, blending into a muscular, slightly arched loin that has slight to moderate tuck up.

The chest should be firm yet flexible, deep to the level of the elbow but moderate in width and oval in shape.

Spanning is an important part of the judging process for the Patterdale Terrier. They must be spanned to test for size, compression and flexibility. The Patterdale should be capable of being spanned directly behind the shoulders by an average sized mans hands. When spanning, lift the front legs off the ground or table and gently squeeze the bottom of the chest to be certain that the chest will compress.

Faults: Chest too deep or wide, incapable of being spanned or lacking the ability to compress. Body too cobby or barrel shaped, causing lack of flexibility of the back.

The hindquarters are strong and muscular. Bone, angulation and musculature match that of the forequarters.

The stifles are well bent and the hocks are well let down. When the dog is standing, the short, strong rear pasterns are perpendicular to the ground, and when viewed from the rear they are parallel to one another.

The tail is set high but not carried over the back. If docked, only one-quarter to one-third should be removed, as sometimes the tail is the only means of pulling the dog out of a burrow. The tail should be strong but not overly thick. There is no preference between docked or natural.

The coat may be smooth, broken or rough. In both coat types, there should be a short, dense undercoat. Very little grooming is required to keep the coat healthy.

hair is coarse, dense and stiff, falling back in place when lifted. No wave is present.

an intermediate coat, having longer guard hairs than the smooth coat. The guard hairs are coarse and wiry and may be wavy. A broken coated dog may or may not have face furnishings which form a beard, moustache and eyebrows.

the hair is coarse and longer overall, including the face and ears.

A correct coat is important for protection against the wet underground and briars. Dogs with damaged coat sections that are due to hunting scars or abrasions should not be penalized in the show ring as long as overall texture can be determined.

Serious Fault: Coat in any climate that is soft, long or downy in texture.

Acceptable colors include black, red, liver/chocolate, grizzle, black and tan, and bronze; either solid or with some white markings on chest and feet.

Notes on color variations. Blacks may have some lighter hairs in the coat. Red may range from tan to deep rust; some black around the muzzle is not uncommon. Liver/chocolates may be a very dark chestnut to a lighter brown. Black and tans may have more or less of these colors.

Disqualifications: Albinism. Any patch or spot of white marking on the body or head. Not to be confused with scarring which can cause white hairs to grow in.

The Patterdale Terrier ranges in height from 10 to 15 inches at the withers. Weight should be in proportion to height, with dogs always shown in hard, fit, working condition with no excess fat.

When trotting, the gait is effortless, smooth, powerful, and well-coordinated, showing good but not exaggerated reach and drive. The topline remains level, with only a slight flexing to indicate suppleness. Viewed from any position, legs turn neither in nor out, nor do feet cross or interfere with each other. As speed increases, feet tend to converge toward centerline of balance.

Movement faults should be penalized to the extent that they would interfere with the terrier’s ability to work efficiently.

(An Eliminating Fault is a Fault serious enough that it eliminates the dog from obtaining any awards in a conformation event.)
Bob tail.

(A dog with a Disqualification must not be considered for placement in a bench show/conformation event, and must be reported to UKC.)
Unilateral or bilateral cryptorchid.
Viciousness or extreme shyness.
Albinism.
Any patch or spot of white marking on the body or head. (Not to be confused with scarring which can cause white hairs to grow in.) 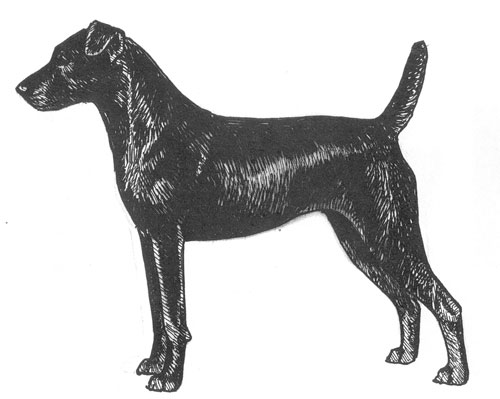