The Parson Russell Terrier was named for the Reverend John Russell, a 19th century parson with a passion for hunting. Reverend Russell was particularly keen on fox hunting and developed a well-known strain of Fox Terriers. During the Rev. Russell’s long life (1795-1883), the Fox Terrier evolved from a sportsman’s dog to a popular and successful show dog. By the end of the 19th century, the show Fox Terriers, smooth- and wire-coated, had diverged so far from their ancestral type that Reverend Russell’s old-style Fox Terriers were referred to as a separate breed - the Parson Russell Terrier.

Because the proponents of this breed were so determined to maintain the breed’s hunting capability, they opposed recognition by all-breed kennel clubs for many years, on the theory that such recognition would lead to degradation of the breed. The Parson Russell Terrier today is virtually unchanged from its origins, and breeders are striving to keep it that way.

The breed was recognized by the United Kennel Club in March of 1991 as the Jack Russell Terrier; and the breed name was changed to Parson Russell Terrier on April 23, 2008.

The Parson Russell Terrier is an agile, active, small-to-medium hunting terrier, built to go to ground after fox. The body is slightly longer than tall and capable of being spanned by an average man’s hands placed behind the front legs. The length of back from withers to set-on of tail is roughly equal to the dog’s height at the withers. Regardless of the size of the individual terrier, the legs must be long enough to allow the dog to move quickly and with agility in rough terrain. The head is moderately broad, with a flat skull, a barely perceptible stop, and a powerful muzzle that is slightly shorter than the skull. Ears are set at the outside edges of the skull and are V-shaped, dropping forward, and carried close to the skull. The tail is straight, set high, and normally docked, but not close to the body. The skin is thick and the coat, whether wiry or smooth, is always dense. The Parson Russell Terrier is predominately white with black, tan or black and tan markings. The Parson Russell Terrier should be evaluated as a working terrier, and exaggerations or faults should be penalized in proportion to how much they interfere with the dog’s ability to work. Scars should neither be penalized nor regarded as proof of a terrier’s working abilities.

The Parson Russell Terrier is a bold, friendly, active, and alert hunting Terrier, built for work underground. This breed is notoriously fearless and requires little encouragement to go to ground. Aggression towards anything other than legitimate quarry detracts from the dog’s ability as a working terrier and should be discouraged as much as possible. This is a high-energy breed and is happiest in an environment where there is lots of regular activity.

The head is proportionate to the size of the body. When viewed from the side, the muzzle is slightly shorter than the skull and joined by a definite stop. The planes of the skull and muzzle are parallel.

The skull is flat and moderately broad, tapering slightly toward the muzzle. Cheeks are muscular, but not over-developed.

The muzzle is strong with powerful, muscular jaws. There is a minimum of falling away under the eye, giving a moderately chiseled look. Lips are tight and darkly pigmented.

The Parson Russell Terrier has a complete set of comparatively large, evenly spaced, white teeth. A scissors bite is preferred, but a level bite is acceptable.

Eyes are deep set, almond-shaped, dark in color, with a mischievous, intelligent expression.

The Parson Russell Terrier has small, V-shaped, button ears of moderate thickness. The ears are set at the outside edge of the skull and the tips are carried close to the head.

Faults: Any ear carriage other than button.
Disqualification: Erect ear.

The neck is clean, muscular, and of sufficient length to enable the dog’s mouth to extend beyond its forepaws when working underground. The neck gradually widens from the nape and blends smoothly into the shoulders.

Shoulders are long, sloping, well laid back and clearly cut at the withers. The upper arm is long and forms an apparent 90-degree angle with the shoulder blade.

Faults: Bowed legs; fiddle front; down in pasterns; toes turned out; knuckling over or any other misalignment of joints; out at elbow.

A properly proportioned Parson Russell Terrier is slightly longer than tall. The length of back from withers to set-on of tail is equal to the height, measured from withers to ground. The Parson Russell Terrier is perfectly designed to go to ground. This requires a chest of sufficient depth to give good heart and lung room, but without so much depth and width that the dog is encumbered underground. The well-sprung ribs extend well back, but must be capable of being spanned behind the shoulder by an average man’s hand. The chest must be capable of being compressed so that the dog is unhindered when working underground. The back is of moderate length, and level, blending into a muscular, slightly arched loin with slight to moderate tuck-up. Skin is thick.

Serious Faults: Barrel ribs; chest too deep or too broad.

The hindquarters are strong and muscular. The bone, angulation, and musculature of the hindquarters are in balance with the forequarters. The stifles are well bent, and the hocks are well let down. When the dog is standing, the short, strong rear pasterns are perpendicular to the ground, and viewed from the rear, parallel to one another.

The feet are fairly round, moderately small, well arched, and tight. Pads are hard, tough, and well cushioned. Dewclaws may be removed.

The tail is set on high and customarily docked to a length that is proportionate to the body and provides a good handhold. The tail may be straight or with a slight curve forward and carried erect or gaily.

The Parson Russell Terrier comes in three coat types. All are dense, hard, and weather resistant and cover the entire dog, including the belly and underside of the thighs.

A double coat consisting of a short, dense undercoat and very dense, wiry outer coat. Hair over the eyes and on the muzzle will form eyebrows and a beard. The outer coat should not be so long as to obscure the outline of the dog.

Any intermediate coat between a rough and smooth coat. The broken coat lies closer to the body than a rough coat and has longer guard hairs than a smooth coat. A broken-coated dog may or may not have face furnishings.

and broken-coated dogs may be stripped to preserve the quality of the coat, but the artfulness of the trimming is not a factor to consider in judging this breed.

Predominantly white with black, tan, black and tan, or no markings. Any white area may be ticked as long as white predominates.
Disqualifications: Any color, pattern, or markings other than listed above; less than fifty percent white; albinism.

Efficient movement is essential to the Parson Russell Terrier. When trotting, the gait is effortless, smooth, powerful, and well coordinated, showing good but not exaggerated reach in front and drive behind. The topline remains level with only a slight flexing to indicate suppleness. Viewed from any position, legs turn neither in nor out, nor do feet cross or interfere with each other. As speed increases, feet tend to converge toward centerline of balance. Poor movement should be penalized to the degree to which it reduces the Parson Russell Terrier’s ability to perform the variety of tasks it was bred to do.

(A dog with a Disqualification must not be considered for placement in a conformation event, and must be reported to UKC.)
Unilateral or bilateral cryptorchid.
Viciousness or extreme shyness.
Undershot or overshot.
Blue eye.
Brown or liver nose.
Absence of pigment in nose.
Erect ear.
Feet with rudimentary toes other than normal dewclaws, also known as “high toes.”
Any color, pattern, or markings other than listed above.
Less than fifty percent white.
Albinism. 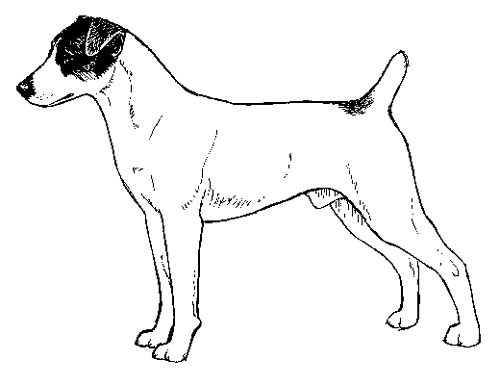