The Papillon (pronounced "Pappy-yon") may have had its origin in Spain or Italy, but both France and Belgium claim the breed today. The breed is believed to have been pure for at least 700 years, since at least the time of the Renaissance.
The Papillon was recognized by the United Kennel Club in 1950.

The Papillon is a small, friendly, elegant Toy-type breed. It has a fine-boned structure, is light and dainty, and has a lively action. Its distinguishing characteristic is its beautiful butterfly-like ears.

The Papillon has a happy, alert temperament. The breed is intelligent and trainable, and should never be shy or aggressive.

The head is small.

The skull is of medium width and is slightly rounded between the ears. There is a well-defined stop, formed where the muzzle joins the skull.

The dark, round eyes are of medium size and are alert in expression. The eyes are not bulging. The inner corner of the eye is on a line with the stop. Eyelid rims are black.

The small, black, rounded nose is slightly flat on top.

Ears may be either erect or drop. Regardless of the type, they are large, have rounded tips and are set on the sides and toward the back of the head.

The erect-type ears are carried obliquely, moving like the spread wings of a butterfly. When the dog is alert, each ear forms an angle of approximately 45 degrees to the head. The leather is sufficient length to maintain the erect position.

Also known as the “Phalene” type, the Drop ears are similar to the Erect ears, except that they are carried drooping and must be completely down.

Faults: Small ears. Pointed ears. Ears set too high. Only one ear up. Ears partly down.

The neck is of medium length.

The well-developed shoulders are laid back to allow freedom of movement.

The slender forelegs are fine-boned and are always straight. Dewclaws on the forelegs may be removed.

The Papillon is not a cobby dog; the body is slightly longer than the height, measured at the withers. The topline is straight and level. The chest is of medium depth. The ribs are well-sprung. The belly is tucked up.

The hindquarters are well-developed and well-angulated.

The slender, fine-boned hind legs are parallel when viewed from behind. Any dewclaws present on the hind legs must be removed. The hocks incline neither in nor out.

The feet are hare-like in shape, thin and elongated. They point neither in nor out.

The long tail is set high and carried well-arched over the body, with the plume hanging to either side of the body.

Faults: Low-set tail. Tail too short. Tail not arched over the back.

The breed is single-coated; there is no undercoat. The long, abundant, fine, silky, coat is straight and flowing. It has a resilient quality and lies flat on the back and sides of the body There is a profuse frill on the chest. The hair is short and close on the skull, muzzle, the front of the forelegs and from the hocks down to the hind feet. The ears are well-fringed, with their inside being covered with medium length, silken hair. The backs of the forelegs are covered with feathers that diminish gradually down to the pasterns. Down to the hocks, the hind legs are covered with abundant breeches (culottes). The tail is covered with a long, flowing plume. The hair on the feet is short, but fine tufts may appear over the toes, growing beyond them to form points.

The Papillon is always parti-colored - white with patches of any color. They may be any parti-color, as long as the nose, eye rim and lip pigment is black. Head color, other than white, must cover both ears, on the back and the front, and extend without interruption from the ears over both eyes. A clearly defined white blaze and noseband are preferred over a solidly marked head. Facial-marking symmetry is desirable. The size, shape, placement, or absence, of body patches are without importance. No color is preferred over any other.
A slight extension of the white collar onto the base of the ears, or a few white hairs interspersed on the color, are not to be penalized provided they do not detract from, or sacrifice, the butterfly appearance.

Very Serious Faults: Other than white color on the head that does not cover both of the ears, back and front, and/or does not extend from the ears over both the eyes.
Disqualification: Albinism. An all white dog. A dog with no white.

The height is measured at the highest point of the shoulder blades. Height range is from eight (8) to eleven (11) inches. Weight is in proportion to the height of the individual dog.

(An Eliminating Fault is a Fault serious enough that it eliminates the dog from obtaining any awards in a conformation event.)
Any dog over twelve (12) inches in height.
Disqualifications
Unilateral or bilateral cryptorchid. Extreme viciousness or shyness. An all-white dog. A dog with no white. Albinism. 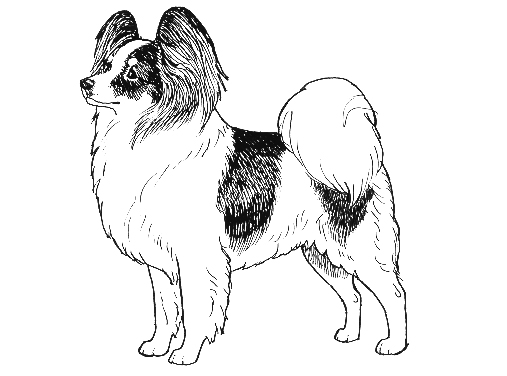