As the breed name suggests, Otterhounds were developed to hunt the large European otters, which are considered predators as they decimate fish.

The Otterhound was recognized by the United Kennel Club in 1985.

This large, rough-coated hound has an imposing head that shows great strength and dignity. Their strong body and long-striding action make them fit for a long day's work in the water or on land. The Otterhound is a dog of good substance and has strongly-boned legs and broad muscles, while not being coarse.

They have an open and amiable expression. Their temperament is amiable, boisterous and even tempered. The Otterhound has an extremely sensitive nose, and is inquisitive and persevering in investigating scents.

Since the Otterhound hunts on both land and water, it requires a combination of characteristics that is unique among hounds. These include a rough, double coat and substantial, webbed feet.

The Otterhound should never be penalized when shown in working condition. Any departure from the breed standard is to be penalized according to the degree of deviation.

The large head is deep rather than wide, and is well covered with hair. A hound that is 26 inches in height measures from 11 to 12 inches from the tip of the nose to the occiput.

The skull is not coarse or overdone. It is slightly domed and rises from the stop to a slight peak at the occiput. The cheekbones are clean.

The muzzle is strong, deep and slightly shorter than the skull. There is plenty of lip and flew, but it is not exaggerated.

A full complement of strong, white teeth meet in a scissors bite, which is preferred.

The deeply set eyes are dark, but eye color and eye rim pigment complements the color of the hound. Eye rim pigment matches that of the nose. Dogs with black-pigmented eye rims and noses should have darker eyes. Those with liver or slate pigment may have hazel eyes. The haw shows only slightly. The expression is open and amiable.

Nose pigment matches that of the eye rims. The large, dark nose is completely pigmented. The nostrils are large.

The long, pendulous, folded ears are an essential feature of the Otterhound. Folded means that the leading edge folds or rolls to give a draped appearance. The ears are set low, or below eye level and hang close to the head. The leather reaches at least to the tip of the nose if pulled forward. They are well covered with hair.

The powerful neck blends smoothly into well laid-back, clean shoulders. It is of sufficient length to allow the dog to follow a trail. A slight dewlap is permissible.

The strongly-boned forelegs are straight. The pasterns are slightly sprung. Dewclaws may be removed from the forelegs.

Slightly rectangular in body. The length, from the point of the shoulder to the buttocks, is slightly greater than the height, measured at the withers. The backline, from the withers to the base of the tail, is level. The short, broad loin is strong. The croup slopes slightly. The chest, which is deep rather then wide, reaches to the elbows in a mature hound. The well-sprung, oval-shaped rib cage extends well toward the rear of the body.

Rear angulation must be balanced with the angulation of the forequarters to allow forward reach and rear drive. The large, broad upper and lower thighs are well muscled.

When the hound is standing, the legs are parallel when viewed from the rear. The stifles are moderately bent. The well-let-down hocks are well defined, turning neither in nor out. Dewclaws are generally removed from the hind legs.

Fore and hind feet are large, broad and compact when the dog is standing, but they are capable of spreading. They are web-footed, the membranes connecting the toes allow the foot to spread. The pads are thick and deep. The toes are arched.

The long tail reaches at least to the hock joint. It is set high on the slightly sloping croup. It is thicker at the base, and tapers to a point. When the dog is moving or alert, it is carried in saber fashion, but never forward over the back. When the dog is at rest, the tail may droop.

An essential feature of the breed is its characteristic coat. The Otterhound is double coated. The dense, rough, coarse, crisp outer coat has a broken appearance. It is two to four inches long on the back, and shorter on the extremities. The texture and quality of the coat are more important than coat length. The short, woolly undercoat is slightly oily and water resistant. It is essential, but may be sparse in the summer months, when it may be hard to find except on the shoulders and thighs.

A softer hair coat on the head and lower legs is natural. The ears are well covered with hair. The neck has an abundance of hair. The tail is feathered (covered and fringed with hair).

The Otterhound is shown in a natural coat that is free of dead hair. There should be no sculpting or shaping of the coat.

A working dog may have a naturally stripped coat lacking length and fringes and that is acceptable. This proper hunting coat will still show the hard outer coat and woolly undercoat.

Any color or combination of colors is acceptable. No discrimination is to be made on the basis of color.

Balance, soundness and type are of greater importance than size.

The Otterhound is to be shown on a loose lead. The smooth, effortless gait is one capable of being maintained for many miles. The dog moves freely with forward reach and rear drive. A loose, shambling walk, from which the dog can spring immediately into a very long striding, sound, active trot, with a natural extension of the head, is breed characteristic. They do not lift their feet high off the ground, and may shuffle at a walk and slow trot. The smooth gallop is exceptionally long striding. 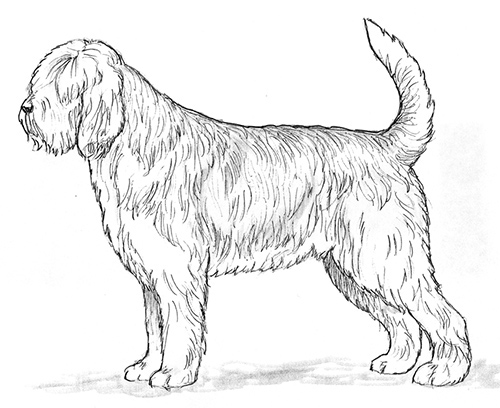