The Old English Sheepdog is a relatively young breed, being not much more than 200 years old. Its use as a herding and droving dog and its physical appearance suggests relation to the Bearded Collie and the Polish Owczarek Nizinny. The required bobbed tail of the breed has its roots in the British tradition of docking the tails of working dogs for identification, as there was a tax exemption for all dogs that worked for a living.

The Old English Sheepdog was recognized by the United Kennel Club in 1948.

The Old English Sheepdog is a strong, muscular, compact, thick-set, square, balanced, able-bodied dog with profuse, but not excessive coat. He stands lower at the withers than at the loin, and has a pear-shaped body when viewed from above. He is absolutely free from legginess, and his gait has a typical roll at the amble and the walk.

The Old English is an adaptable, intelligent breed, with an even disposition; never showing signs of aggressiveness, shyness or nervousness.

Broad and capacious, rather square. The supraorbital ridges over the eyes are well-arched. The stop is well defined.

A full complement of strong, large, evenly placed, white teeth meet in a scissors bite. An even bite is acceptable but not desirable.

The medium-size ears are carried flat to the side of the head.

Shoulder blades are well laid back, and the shoulders are narrower at the withers than at the point of shoulder.

The straight forelegs have plenty of bone. The distances measured from the withers to the elbow and from the elbow to the ground are approximately the same. The elbows are held close to the brisket.

The rather short, very compact body is broader at the rump than at the shoulders. The withers are lower than the loin; this is a breed characteristic. The gently arched loin is very stout. The ribs are well sprung; never being slab sided. The brisket is deep and capacious.

The hindquarters are round and muscular.

The stifles are well-turned, and the second thigh is long and well-developed. Rear pasterns are short and perpendicular.

Small, round and tight, with thick pads and well-arched toes. Dewclaws should be removed.

Natural bob, docked completely, or natural. If natural, the tail is low-set and never curled or carried over the back. It should be well-feathered with hard textured coat.

Profuse and of hard texture, the outer coat is not absolutely straight, but is shaggy and free from curl. The undercoat is a waterproof pile. The head is well-covered with hair. The ears are moderately coated. Neck and forelegs are well coated. The hindquarters are more heavily coated than the rest of the dog. Quality, texture and thickness of coat are to be given more consideration than length.

The natural outline of the dog and the coat's natural texture are never to be changed by an artificial means. The feet and rear may be trimmed as necessary for cleanliness.

When walking, the Old English Sheepdogs exhibits a characteristic bear-like roll from the rear. At the trot, he shows effortless extension and strong drive. At slow speeds, some dogs may tend to pace. When moving, the head carriage may be in a naturally lower position. 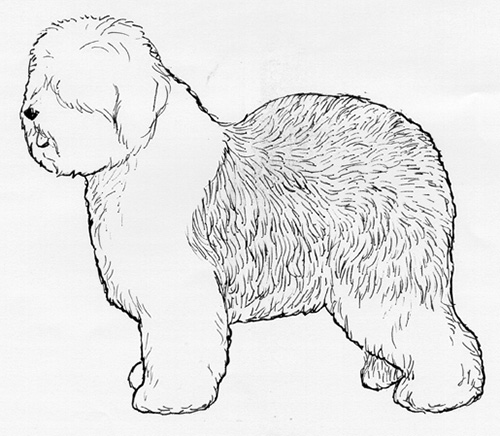