The Old Danish Pointing Dog is a result of cross breeding between gypsy dogs, local farm dogs and St. Hubert’s Hounds, which resulted in a pure breed of piebald white and brown dogs. They are a versatile gun dog for a variety of birds.

The Old Danish Pointing Dog was recognized by the United Kennel Club January 1, 2006.

A medium sized, rectangular dog, strongly built. The secondary sex characteristics are strongly marked, with the males being powerful and substantial and the females lighter and more spirited.

Quiet, stable, determined and courageous, the breed is suitable for small as well as large hunting grounds.

The head is short and wide, and does not have a pronounced stop.

Wide and rounded, with a prominent occiput.

Broad, with deep flews that give the head its characteristic depth.

The Old Danish Pointing Dog has a complete set of evenly spaced, white teeth meeting in a scissors bite.

Fleshy and large, with wide open nostrils. Dark to light liver in color.

Medium sized, neither sunken nor prominent. Dark brown color is desirable. A slight drooping of the eyelid is tolerated.

Set rather low, medium in length, broad and rounded at the ends, the front edge of the ear should hang close to the cheek.

Muscular and well furnished. Throatiness is a hallmark of the breed, but should not be exaggerated.

The shoulders lie flat against the chest, and have strong muscles that are clearly visible. The upper arms are long and very muscular.

Viewed from the front, straight and parallel. The elbows are close and well back under the body. The forearm is straight, with strong bone. The pasterns are slightly bent.

In proportion, the body is slightly longer than tall. The chest is deep and wide, especially in males. The ribs are well sprung and reach far back. There is a well developed forechest. The withers are well defined and the highest point of the topline, which slopes slightly to the croup. The back is firm and muscular and the loin is short, wide and strongly coupled. The croup is broad and slightly sloping to the set on of the tail.

There is good angulation between the pelvis and the femur.

The upper thigh is muscular, long and broad. The lower thigh is fairly long and muscular. The stifle is well bent. The hocks are powerful and moderately angulated.

Strong and firm, with well arched toes and tough pads.

Set somewhat high, strong at the base, and tapering towards the end. Medium length, reaching almost to the hocks, the tail is carried naturally drooping. Docking is not allowed.

Fault: Tail carried over the topline.

The coat is short, dense and hard, the coat must cover the entire body. The skin is not too thin, close fitting on the body and legs, looser on the head and neck where it forms a dewlap and lip folds.

White with brown markings, or brown roan. The brown color may vary but darker is preferred.

Disqualification: More than one inch over or under the allowed height.

Long strides, with good reach and drive, and high head carriage. Movement is straight and parallel front and rear.

(A dog with a Disqualification must not be considered for placement in a conformation event, and must be reported to UKC.)
Unilateral or bilateral cryptorchid.
Viciousness or extreme shyness.
Albinism.
Undershot, overshot or wry bite.
Entropion, ectropion, or distichiasis.
More than one inch over or under the allowed height. 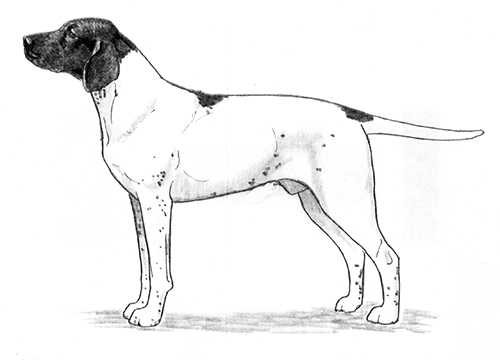