The Norwegian Buhund is descended from the Spitz-like dogs that traveled with the Vikings on their long land and sea journeys. The modern breed was developed in western Norway, where they herded sheep and guarded farms, and occasionally were used for hunting bear and wolf. Today the breed works with livestock and guards home and family.

The Norwegian Buhund was recognized by the United Kennel Club January 1, 1996.

The Norwegian Buhund is a typical Spitz type herding dog of slightly less than medium size. It has a wedge shaped head, prick ears, a tightly curled tail, and a body that is square in appearance.

Courageous, energetic and friendly, the Norwegian Buhund is quick to learn and eager to please.

The head is wedge shaped, clean, and not too heavy. The differences between males and females should be easily identifiable.

Nearly flat. The toplines of the skull and muzzle lie in parallel planes. The stop is well defined, but not abrupt.

About the same length as the skull, with a straight nasal bridge. The face is well filled under the eyes. The lips are tight and black.

The Norwegian Buhund has a complete set of evenly spaced, white teeth meeting in a scissors bite.

The eyes are oval in shape, as dark in color as possible, and have black eye rims. Expression is alert and frank.

Disqualification: Ears that are not erect.

The shoulders are moderately sloping.

Straight, with well set elbows and strong but not coarse bone. The pasterns are moderately sloping.

Square when measured from top of the withers to the ground and prosternum to buttocks. The chest is deep, and the ribs are well sprung. The back and loin are short, strong and straight, and the croup is nearly flat.

The thighs are powerful and well muscled. There is moderate angulation at the stifle and the hock.

Set high, firmly curled and carried over the center of the back, not too much to the side.

Double, with a thick, rich, hard outer coat that is rather close lying. The undercoat is soft and dense. On the head and the front of the legs, the coat is comparatively short, and longer on the neck, chest, back of thighs and tail.

Faults: Coat that is too long or wavy.

Any shade of wheaten, from pale cream to bright orange, with or without black tipped hairs. A black mask is acceptable. As little white as possible is preferred. Also solid black, with as little bronzing as possible and small amounts of white markings, the fewer the better.

Free and effortless, with good drive and a firm topline.

(A dog with a Disqualification must not be considered for placement in a conformation event, and must be reported to UKC.)
Unilateral or bilateral cryptorchid.
Viciousness or extreme shyness.
Albinism.
Overshot or undershot bite.
Ears that are not erect.
Any color other than those described in the standard. 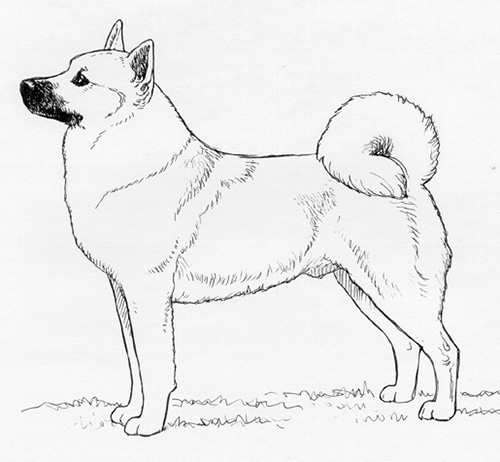