The Norrbottenspetz is a small hunting spitz breed from Sweden that probably developed from the small hunting dogs that lived in ancient times with the hunters of the Nordic region. These dogs lived and survived for centuries under the process of natural selection, where only the strongest and most effective had the chance to grow to maturity and reproduce. Following World War II, the price of furs collapsed and interest in the Norrbottenspetz vanished, and the Swedish Kennel Club declared the breed extinct. Eventually it was proven that the breed had survived, mostly as a farm guard and companion dog, in the Norrbotten region. A group of enthusiastic hunters worked to find dogs that were breed typical, and in 1967 the Swedish Kennel Club again accepted the breed for registration and a new standard was written. Today, the breed is used mostly as a barking bird dog, but it is also effective on small fur bearing animals and can stop Elk for the hunter.

The Norrbottenspetz was recognized by the United Kennel Club on January 1, 1996.

The Norrbottenspetz is a small, compactly built, spitz type dog with dry, powerful muscles. The breed is very well structured and extremely mobile, showing high head carriage and fearlessness. The differences between the sexes are well marked.

An alert and attentive hunting dog, the Norrbottenspetz is active, kind and self confident. The breed must never be nervous, shy or aggressive.

The head is strong, dry and wedge shaped.

Moderately wide and rather flat, with a slightly arched forehead. The superciliary arches should be well marked. The stop is moderate but distinct.

The muzzle is moderately long and sharply tapering. It should be approximately one-half the length of the entire head. The nasal bridge is straight and the lips are thin, dry and tight.

The Norrbottenspetz has a complete set of evenly spaced, white teeth meeting in a scissors bite.

Faults: Clearly over or under shot bite.

Medium size, almond shaped, and set slightly obliquely. They are dark brown in color and bright, giving a calm, yet energetic, expression.

Faults: Eyes that are too large, round or protruding. Yellow or amber colored eyes.

Moderately long, dry and muscular, arched at the crest and carried erect.

The legs are straight, with lean muscles and strong bone. The elbows point directly backwards. The pasterns are slightly sloping.

In males, the body is squarish; with females being slightly longer. The depth of the body is about half the height at the withers. The chest is moderately deep and long, with a well developed forechest. Viewed from the side, the forechest should be marked, and the lowest point of the chest should reach just below the elbows. The withers are high, and the back is short, strong, muscular and elastic. The loin is short and broad, and the croup is moderately long and broad and slightly sloping. There is moderate tuck-up.

The angulation of the pelvis and the upper thigh forms a right angle, matching that of the forequarter.

The thighs are proportionally long and well muscled. The stifle joint is strong and well angulated. The hock is broad and strong, and the rear pasterns are dry and rather long.

The feet are small and strong, with well arched, tight toes and solid pads.

Fairly high set and carried in a high curve, loosely curled with the tip touching the side of the upper thigh. The length should not reach below the hock.

Fault: A tail that is never carried over the back.
Disqualification: Bob tail.

Hard, short, straight and close fitting, with a dense undercoat. The coat is short on the face, skull, ears and fronts of legs, and longer on the neck, back of thighs and underside of tail.

All colors are permitted, but the preferred color is white with yellow or red/brown markings.

Ideal height at the withers for males is 18 inches; for females it is 16.5 inches. There is a tolerance of 1 inch, but dogs clearly oversize are to be faulted.

Gait is smooth, even and ground covering, with strong drive. The topline must remain firm and the hind legs travel parallel to one another.

(A dog with a Disqualification must not be considered for placement in a conformation event, and must be reported to UKC.)
Unilateral or bilateral cryptorchid.
Viciousness or extreme shyness.
Bob tail.
Albinism. 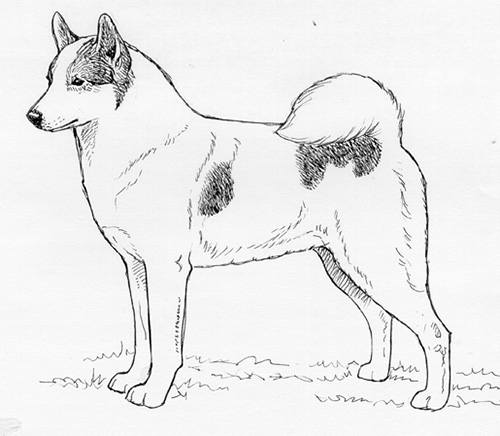