As the name indicates, the breed originated in Newfoundland from dogs native to the island. Various theories state that the big black bear dogs introduced by the Vikings around 1100 AD contributed to the breed’s makeup. As European fishermen began to spend summers fishing in the areas around the island, various other breeds came with them and helped to shape and reinvigorate the breed, although the essential characteristics were not changed. By 1610, when colonization was permitted, the distinct physical characteristics and mental attributes had been permanently established in the breed.

The Newfoundland was recognized by the United Kennel Club in 1919.

As a whole, the Newfoundland has the appearance of a multipurpose dog that is at home on land and in the water. It is capable of draft work as well as possessing natural lifesaving instincts. It is large, balanced, heavy coated, deep bodied, well boned and strong (well muscled). The Newfoundland is slightly longer than tall. Females may be slightly longer in body than the males. Males may exhibit a more massive appearance than females.

Structure and movement faults that may be common to all working dogs are as undesirable in the Newfoundland as they are in any other breed even though they may not be specifically referred to in the standard. Any deviation from the ideal is to be penalized to the extent of the deviation.

The breed is sweet-dispositioned, never acting dull or ill tempered. Their soft expression reflects the benevolence, intelligence and dignity that are breed characteristics. The Newfoundland is a devoted companion.

Dignity and a proud head carriage are exhibited in all good specimens of the breed.

The head is massive. Females have the same general head conformation as the males, but it is feminine and less massive.

The skull is broad, with a slightly arched crown and a strongly developed occiput. The stop is moderate but may appear abrupt in profile because of the well-developed superciliary ridges. The smooth forehead and face are free of wrinkles.

The broad, deep, square muzzle is covered with short, fine hair. The muzzle length, measured from the stop to the tip of the nose, is less than the distance from the stop to the occiput. The flews are soft, and the corners of the mouth are evident but not overly pronounced.

The relatively small, deep-set eyes are spaced wide apart. They are dark brown in color in the black and black and white dogs; lighter shades are permitted in the brown and gray dogs. The eyelids fit close (with no inversion).

The triangular-shaped ears are relatively small and have rounded tips. They are set well back on the side of the head and lie close to the head. The ear reaches the inner corner of the eye (on the same side) when the ear is brought forward.

The strong neck is well set on the shoulders, and is long enough to provide a proud head carriage. The neck should not show excessive dewlap.

The well-boned, well-muscled forelegs are straight and parallel from the elbow to the ground when the dog is viewed from the front. The elbows are close to the chest and point directly to the rear. The strong pasterns slope slightly.

Fault: Down in pasterns.

The topline is level, and is broad, strong and well muscled from the shoulders through the croup. The broad croup slopes at about a 30-degree angle. The full, deep chest reaches at least down to the elbows. The ribs are well sprung and there is little or no tuck up.

Faults: Roached, slack or sway back.

Correct rear structure is of utmost importance. As a whole, the rear assembly is powerful, well muscled and well boned.

The hind legs are straight and parallel when viewed from the rear. The upper thigh is wide and muscular. The lower thigh is strong and fairly long. The stifle is well bent but not exaggerated. The hock is well let down. The line from the hock to the ground (rear pastern) is perpendicular to the ground. Dewclaws should be removed from the rear legs.

The cat-type, well-rounded feet are tight and are proportionate to the body in size. Toes are firm and arched. Complete webbing is always present.

The strong tail is broad at the base. The set of the tail follows the natural line of the croup. If extended, the tail bone reaches to the hock. At rest, the tail hangs straight or with a slight curve at the end. The tail is carried straight out or slightly curved when the dog is in motion or is excited. The tail never curls over the back. A tail with a kink is objectionable.

Adult coat is double, and water resistant. The coarse outer coat is moderately long and full. It is preferably straight and flat, but may have a slight wave. When rubbed the wrong way, the coat tends to fall back into place. The soft, dense undercoat tends to be less so in the summer months and in tropical climates. An open coat is objectionable.

The face and muzzle have short, fine hair. Excess hair on the ears may be trimmed, but it is not necessary. The legs are feathered all the way down. The feet may be trimmed for neatness. The tail is covered with long, dense hair, but it does not form a flag. Any trimming other than around the ears and on the feet is discouraged.

Black, white and black, brown, gray. Black, brown and gray may be solid colors or have white at some, or all, of the following locations: chin, chest, toes and tip of tail. Amount of white markings at these locations is irrelevant.
White and black (Landseer) is a white base coat with black markings, typically a black head with or without a white blaze, a separate black saddle with even markings and a black croup and tail base. The remaining parts are white and may have minimal ticking.

Disqualifications: Any color or combination of colors not described.

Quality, balance, structure and correct movement are not to be sacrificed at the expense of size alone.

The balance of good front and rear assemblies are essential to good movement. In motion the Newfoundland exhibits good reach in the front and a strong drive from the rear. Both fore and hind legs travel straight forward, and do not swing out. As speed increases, the dog single tracks. A slight roll of the skin while gaiting is breed typical.

Faults: Crabbing. Weaving. Crossing over. Toeing out or toeing in. Hackney gait. Pacing.

(A dog with a Disqualification must not be considered for placement in a conformation event, and must be reported to UKC.)
Unilateral or bilateral cryptorchid.
Viciousness or extreme shyness.
Short, flat coat.
Albinism.
Any color or combination of colors not described. 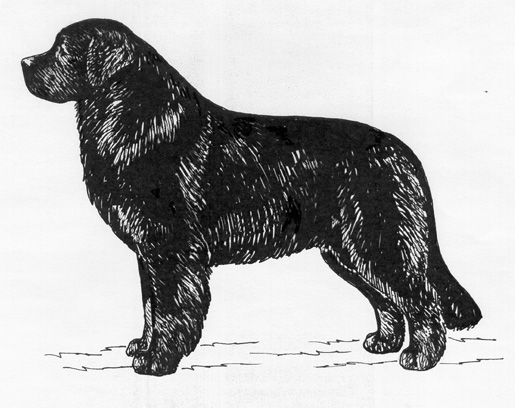