This is a large breed, but it need not be excessively so. Further, the Neapolitan Mastiff should appear fit, display moderate wrinkle, and not be burdened by extra weight or skin.

UKC is unwilling to condone the validity of using exaggerated specimens of this breed in a breeding program and, to preserve its health and vibrancy, cautions judges about awarding wins to these representatives.

The Neapolitan Mastiff is a direct descendant of the Molussus, the ancient mammoth war dogs of the Middle East (Sumeria, Assyria, Phoenecia, and Babylonia). It is first and foremost a working/utility breed, whose purposes are greatly varied. It has been primarily a farm helper/protector, also serving as a herding dog, flock protector, cattle drover, cart dog, large game hunting dog, and personal protection dog.

The Neapolitan Mastiff was recognized by the United Kennel Club on January 1, 1995.

The Neapolitan Mastiff is a large and massive dog, with loose skin all over his body, wrinkles on his face and neck.

The breed is strong and loyal, but not aggressive nor prone to bite without cause. The Neapolitan Mastiff is an alert, intelligent, noble and majestic defender of person and property.

The head is large in comparison to the size of the body. The planes of the skull and muzzle must be parallel. The head is permitted some wrinkles and folds; one that is typically pronounced begins at the outer corner of the eye and descends to the profile corner of the lips. Disqualifications: Complete absence of wrinkles, folds and dewlap. Convergence or divergence of the parallel lines of the skull and muzzle.

The broad skull is flat between the ears, and arched at the forehead. The skull width is greater than one-half of the total head length. When viewed from the front, the skull is very developed, with a pronounced frontal furrow and a well developed brow. The occiput is barely apparent. The stop is very pronounced.

The muzzle is very wide and deep. The muzzle length is one-third of the total head length. The sides of the muzzle are parallel so that when viewed from the front, the muzzle almost seems to form a square. The lips are heavy, thick and abundant. When viewed from the front, the upper lips meet to form an inverted "V". In profile, the upper lip descends beyond the lower line of the jaw, and is on the perpendicular line with the outer corner of the eye. The length of the muzzle is sufficient so that the nostrils remain free from any wrinkles on the face.

A full complement of strong, well-developed regularly aligned, white teeth meet in a scissors or level bite. A reverse scissors bite is acceptable.

Set fairly deeply and well apart. The color of the iris should be darker than the color of the coat. The expression is intimidating when the dog is alert. Eye rim color corresponds to the color of the nose. Eyes not to be made obscure and should remain free from the burden of excessive wrinkles and loose skin.

Large, with well opened nostrils. The nose must not protrude beyond the vertical line of the lips. Color corresponds to coat color.

The neck is rather short and it is thick and well muscled. There is a double dewlap that is well separated and not exaggerated; it begins at the lower jaw and does not descend to lower than the middle of the neck. Moderation in wrinkle and dewlap is preferred.

The shoulder blades are covered with long, well developed and defined muscles. The blades form an angle with the upper arm of approximately 110 degrees.

The forearms are vertical, strong in bone and covered with lean, well developed muscles. The elbows are not held too close to the body. There may be loose skin on the elbows, but the folds should be localized and not extend further down the leg. The pastern joint is broad and lean, and the pasterns are flat and sloping.

Body length is greater than height by 10% to 15%. The topline is level. The withers are broad and not very prominent. The chest is broad and deep, nearly half the height at the withers and the ribs are long and well sprung. The tip of the sternum is at the same level as the point of the shoulder. The loin is wide, and the rump is broad and well muscled. The slope of the croup is about 30 degrees. The hipbones are slightly prominent.

Powerful and strong, in harmony with the forequarters.

In length, the long upper thigh is about one-third of the dog's height. It has an inclination of about 60 degrees, and is wide, with large, clearly-defined muscles. The thighbone joins the hip at a 90-degree angle. The stifle angle is about 110 to 115 degrees. The lower thigh is slightly shorter than the upper thigh. The rear pasterns are long and cylindrical in shape, perfectly straight and powerful. Dewclaws may be removed.

The round, voluminous, tight forefeet have well arched toes. The hard, dry pads are well pigmented. The strong nails are darkly pigmented. The hind feet are smaller than the forefeet, with identical attributes.

The tail is wide and thick at the base, and then tapers slightly. It is generally docked to allow two-thirds to remain, but if natural it will reach the point of the hock. At rest, the tail is carried slightly sloping. In action, it is carried level or slightly higher than the topline.

The glossy, dense, fine coat is equal in length and uniformly smooth. The maximum length is about five- eighths of an inch. It must not have any trace of fringe.

The thick skin is loose on the head, where it forms noticeable wrinkles and folds. Moderation is preferred. On the underside of the neck it forms a well-divided dewlap.

Preferred colors include: gray, lead, black, mahogany, tawny, and tawny stag. Each color may be brindled. There may be small white patches on the chest and on the tips of the toes. The following shades are acceptable, but not preferred: brown, pale gray, and cream.

To be shown fit, and without excess weight.

A typical characteristic of the breed is its walk, which is slow and resembles that of a bear. The trot has good extension of the front legs, with strong drive from the hindquarters. The preferred gaits are the walk and the trot. The pace is tolerated. The Neapolitan Mastiff rarely gallops but does appear sound and efficient while in motion, not burdened by excess weight or skin.

(A dog with a Disqualification must not be considered for placement in a conformation event, and must be reported to UKC.)
Unilateral or bilateral cryptorchid.
Viciousness or extreme shyness.
Albinism.
Overshot bite.
Convergence or divergence of the parallel lines of the skull and muzzle.
Complete lack of eye rim pigment.
Complete lack of nose pigmentation.
Crossed eyes.
Wall eyes.
Complete absence of wrinkles, folds and dewlap.
Complete absence of a tail. 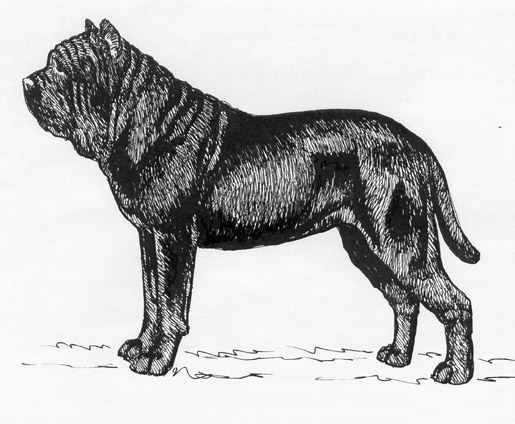