The Miniature and Toy Poodles were probably developed by crossing small Standard Poodles with Maltese and Havanese to bring down the size. While the Standard Poodle was first developed as a hunting dog, the Miniature and Toy varieties were strictly companion dogs, popular in the French court from the reign of Louis XIV through that of Louis XVI. Miniature and Toy Poodles appear in many 17th century paintings. These dogs were also popular with circus performers and clowns from as early as 1700 through the late 1800s. Poodles were first brought to the United States at the end of the 19th century, but the breed did not become popular until after World War II. By the mid 50s, the Poodle was the most popular breed in the United States, a position held for over 20 years. Today the Poodle is divided into two breeds: the Standard Poodle, which serves primarily as a gun dog and companion animal, and the Poodle, composed of the Miniature and Toy varieties, and which serves primarily as companion breed. The standards of the two breeds are essentially identical but for size.

The Poodle was recognized by United Kennel Club in 1914. The Poodle was divided into two breeds, Standard Poodle and Poodle, on January 1, 2000. The standards for the Multi-Colored Poodle and the Poodle are identical except for color and color patterns.

The Multi-Colored Poodle is a medium-sized, squarely built dog with a distinctive harsh curly coat that may be presented in any of several traditional Poodle clips or corded. The ears are long, drop, and densely feathered. The tail is normally docked, set high, and carried erect. The length of body (sternum to point of buttocks) is equal to the height (withers to ground). The Multi-Colored Poodle carries himself with an air of dignity and pride.

The Multi-Colored Poodles most readily identifiable characteristic is its harsh, dense coat, which is presented in various traditional trims or, less frequently, corded. Another essential characteristic is proper temperament. The breed is noted for its high intelligence, trainability and sense of humor. Poodles are highly social and require human companionship and regular, close interaction with family members. Because of their great intelligence and the joy they take in human companionship, Poodles excel in performance events of all sorts. They are extremely affectionate with children.

In profile, the muzzle is straight and roughly equal in length to the length of the skull, measured from stop to occiput. The muzzle is fine with a slight chiseling under the eyes, but with sufficient depth of underjaw to prevent snipiness. Lips are tight with black or liver pigment appropriate to coat color.
Serious Faults: Lip pigment incomplete or of wrong color for color of coat; weak underjaw.

Nose leather is black or liver, depending on coat color.
Serious Faults: Nose pigment incomplete or of wrong color for color of coat.

Eyes are oval in shape and set sufficiently wide apart to give an alert, intelligent expression. Eye and eye rim colors are black or liver, depending on coat color.
Serious Faults: Round, protruding, large or very light eyes; eye and eye rim colors wrong for color of coat; eye rim pigment incomplete.
Disqualifications: Blue eyes, or any variation of, including flecks and marbling.

Ears are drop with long, wide, densely-feathered ear leather. Ears are set at or slightly below eye level and hang close to the head.
Fault: Excessively long ear fringe.

The neck is of sufficient length and strength to permit the head to be carried high when standing or moving. The neck blends smoothly into well-laid-back shoulders. The skin on the neck and throat is tight.
Serious Fault: Ewe neck

Shoulders are smoothly muscled. The shoulder blades are long and well laid back. The upper arm appears to be equal in length to that of the shoulder blade and joins it at an apparent right angle. Elbows are close to the body. The forelegs are straight with bone and muscle proportionate to the size of the dog. Pasterns are strong and slightly sloping. Viewed from the front, the forelegs are parallel. Viewed from the side, the point of elbow is directly below the withers.
Serious Fault: Upright shoulders.

A properly proportioned Multi-Colored Poodle is square, with the length of body (measured from prosternum to point of buttocks) equal to height (measured from the withers to the ground). The length of the front leg (measured from point of elbow to the ground) is just slightly longer than half the dogs height. The line of the back drops off almost imperceptibly behind the withers and is then level. The loin is short, broad and muscular with moderate tuck-up. The ribs extend well back and are well sprung out from the spine, then curving down and inward to form a deep body. The brisket extends to the elbow. Viewed from the front, the chest is well filled and moderately wide.

Hindquarters are muscular and with broad second thighs. The angulation of the hindquarters is in balance with the angulation of the forequarters. The stifles are well bent, and the hocks are well let down. When the dog is standing, the short, strong rear pasterns are perpendicular to the ground and, viewed from the rear, parallel to each other. In profile, the croup is nearly flat.
color.

The feet are relatively small, oval in shape and compact with well-arched toes and thick, elastic pads. Feet do not turn in or out. Nails are short and dark or self-colored, depending on coat color. Dewclaws may be removed.

The tail is straight, set high, and normally docked to a length proportionate to the size of the dog. Whether standing or moving, the tail is carried erect.

The Multi-Colored Poodle has harsh, dense, curly coat. For conformation exhibition, the coat may be presented naturally, corded, or in one of the traditional clips described below.

These colors (and combinations of colors) must appear in one of the following patterns:

At least fifty percent white, with spots or patches of any other acceptable solid color. The head can be of a solid color but white muzzle, blaze, or white muzzle/blaze combination (preferably symmetrical) are equally acceptable. Full or partial saddles are acceptable, as long as they do not exceed the color proportion, but are not preferred. Ticking in the white of the coat is acceptable but not preferred.

Solid base color with sharply defined markings of a second color appearing above each eye, on the sides of the muzzle, on the throat and forechest, or in a chin and forechest bowtie pattern as well as on all four legs and feet, and below the tail. A phantom without clearly defined face markings or one that presents with its whole face colored in the second color is acceptable, as long as it maintains all the other specified body markings. Any combination of acceptable colors is allowed.

Less than fifty percent white, with the remaining percent any other acceptable solid color.

A coat represented by black-tipped hairs on a background of any solid color, with no particular pattern/location designated for such hairs.

A dog that clearly exhibits more than one of the acceptable color patterns, such as; a Parti with full or incomplete phantom markings (facial markings with or without presentation of the diamond under the tail), or a Phantom with additional abstract markings, etc.

A solid color base with a striped pattern at the skin. A longer coat may appear blended, but the shaven areas, such as face, feet and base of tail should have distinct stripes. Striping may fade with age due to progressive graying.

Disqualification: Any color or color pattern other than described above. Merle coloring. Albinism.

Over 10 inches up to 15 inches, measured at the withers.

10 inches or under, measured at the withers.
Within each individual variety, the judge shall favor the smaller dog when all other factors are equal, including balance and proportion.

Eliminating Faults: A Miniature Poodle over or under the qualifying heights; a Toy Poodle over 10 inches.

When trotting, the gait is effortless, smooth, powerful and well coordinated, showing good reach in front and drive behind. Action is light and springy with head and tail carried up.

(An Eliminating Fault is a Fault serious enough that it eliminates the dog from obtaining any awards in a conformation event.)
A Miniature Poodle over or under the qualifying heights; a Toy Poodle over 10 inches.

(A dog with a Disqualification must not be considered for placement in a conformation event, and must be reported to UKC.)
Unilateral or bilateral cryptorchid.
Viciousness or extreme shyness.
Albinism.
Any color or color pattern other than described above.
Merle coloring.
Blue eyes, or any variation of, including flecks and marbling.

Please Note: In UKC Conformation Shows, this breed is shown by variety in this order - Toy, Miniature. 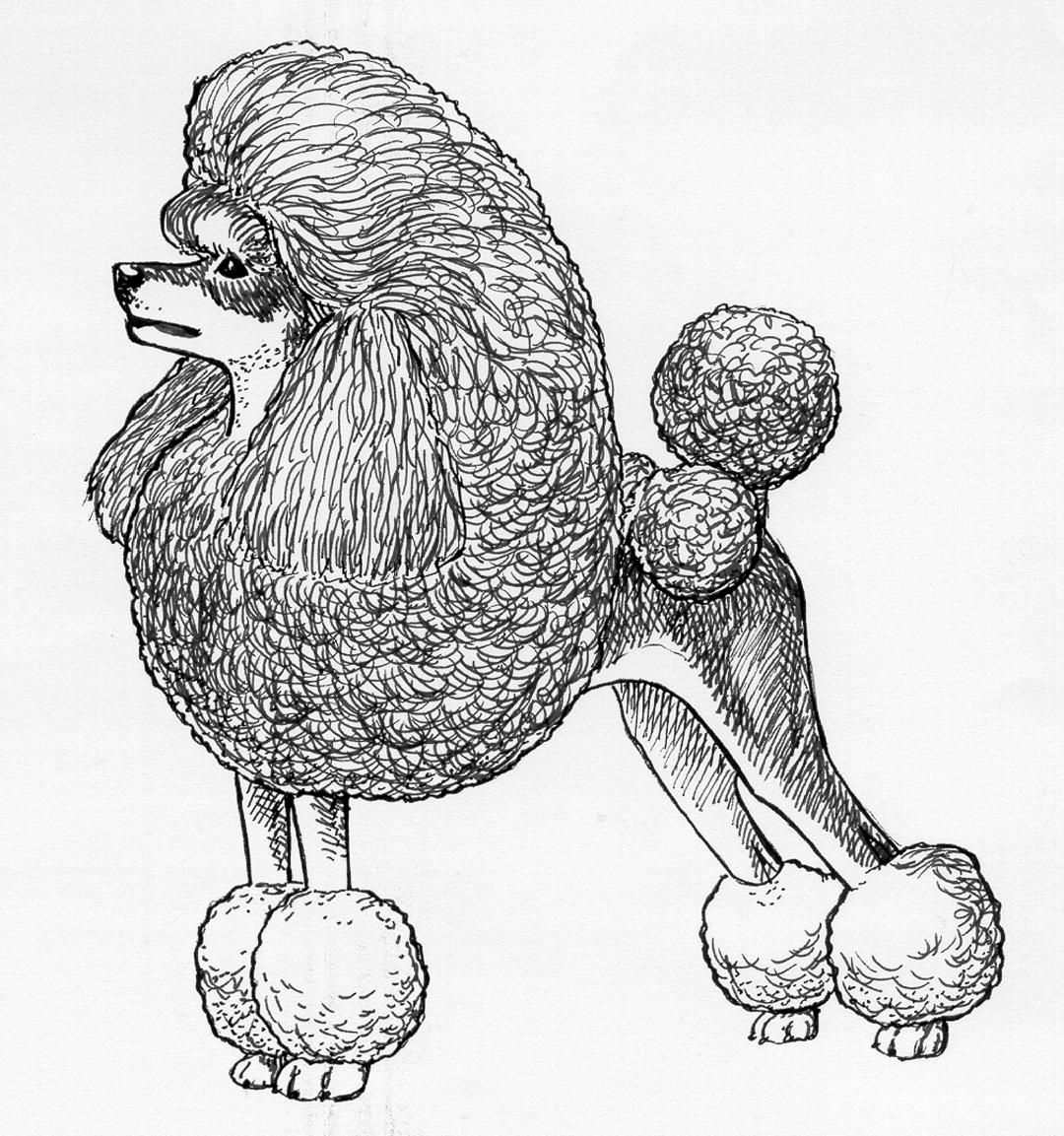 Continental Clip. Face, throat, feet and base of tail are shaved. Hindquarters are shaved with pompons on the hips optional. There is a pompon on the end of the tail. Legs are shaved leaving bracelets on the rear legs and puffs on the forelegs. A portion of the foreleg is shaved above the puff. The rest of the body is left in full coat but may be shaped for balance. 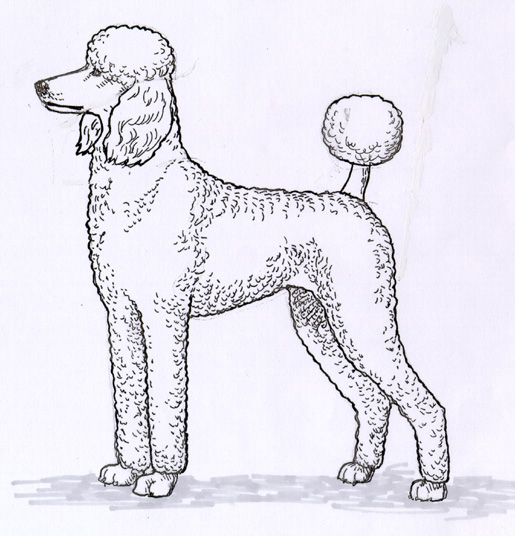 Sporting Clip. Face, feet, throat and base of tail are shaved. There is a pompon on the end of the tail. Coat on the top of the head is scissored into a cap. The rest of the body and legs are trimmed following the outline of the dog. The body coat shall be no longer than 1 inch in length. Leg hair may be slightly longer.