The Miniature Schnauzer was developed in Germany, probably resulting, in part, from crosses between the Standard Schnauzer and the Affenpinscher during the last decade of the 19th century. Black Spitz-type dogs, and even Poodles, have also been suggested as possible ancestors of the breed. The first Miniature Schnauzer was registered in Germany in 1898, but the breed did not arrive in the United States until 1924.

Although the breed was probably developed as a ratter, most Miniature Schnauzers today are primarily companion dogs. They have not lost their working abilities, however, and continue to excel in all performance events.

The Miniature Schnauzer was recognized by the United Kennel Club in 1948.

The Miniature Schnauzer is a small, compact, robust, nearly square dog with a strong, rectangular head featuring V-shaped eyebrows extending over the eyes, and thick whiskers. Ears are set high on the skull and may be natural or cropped.

The Miniature Schnauzer resembles the Standard Schnauzer, and should not appear fine and racy, toyish, or heavy and overbuilt.

Gender differences are apparent in this breed, with the female having a somewhat more refined head, a lighter neck, and a slightly longer loin.

The head is proportionate to the size of the body. When viewed from the side, the top lines of the skull and muzzle appear to be in two parallel planes, joined by a slight stop. The foreface is at least as long as the topskull.

The skull is flat, unwrinkled, and fairly long. Viewed from above, the skull tapers slightly from the occiput to the muzzle. Cheeks are flat and clean.

Faults: Rounded or bumpy skull; skull too long and narrow.

The bridge of the muzzle is flat and parallel to the line of the topskull. Viewed from above, the muzzle actually tapers slightly from stop to nose, but appears rectangular and nearly as broad as the skull, due in part to the thick whiskers on the muzzle. Lips are tight and darkly pigmented. The hair on the muzzle is long and thick, forming the characteristic beard.

The Miniature Schnauzer has a complete set of large, evenly spaced, white teeth meeting in a scissors bite.

Nose is always black, and of good size.

Eyes are medium in size, oval in shape, and dark brown in color. They are set wide apart and deeply under the brow. Eye rim pigment is black.

Ears are set high on the skull and may be natural or cropped. Natural ears are small, V-shaped, breaking above the skull and held close to the cheeks. If cropped, ears are pointed and in balance with the head. The inner edge is perpendicular to the skull, with as little bell as possible along the outer edge. A Miniature Schnauzer with correctly set ears must not be penalized for an imperfect ear crop.

The neck is strong and well arched, broadening slightly at the withers, where it blends smoothly into the shoulders. The skin is tight.

Fault: Any suggestion of a dewlap.

The shoulder blades slope well back and toward each other. Shoulders are muscled, but flat and clean. The withers are high and well knit. Viewed from the side, the withers are in a nearly vertical line above the elbow. The upper arm is roughly equal in length to the shoulder blade and joins it at an apparent right angle.

The forelegs are straight, well boned, and parallel when viewed from all sides. The elbows are set close to the body. Viewed from the front, the forelegs are separated by a fairly deep brisket. The pasterns are short, only slightly sloping, and strong.

A properly proportioned Miniature Schnauzer is nearly square, and the length of the front leg (measured from point of elbow to the ground) is approximately equal one-half of the dog’s height. The withers are slightly elevated and the topline slopes very slightly from the withers to the tail. Whether the dog is standing or moving, the line of the back is strong and firm. The loin is short, muscular, and deep with no tuck-up. Ribs are long and oval in shape, with the first five ribs slightly flatter to allow free movement of the elbows. The brisket extends to the elbow. The chest is moderately broad, oval in diameter, and reaches to the elbows. The forechest is distinctly marked by the point of the sternum. The croup is nearly flat.

Faults: Roached or sagging topline; loaded shoulders; chest too broad, too narrow, or too shallow; ribs too round or too narrow.

The hindquarters are strong and muscular, providing the drive necessary for fluid, well-coordinated action. The bone, angulation, and musculature of the hindquarters are in balance with the forequarters. The stifles are well bent, and the hocks are well let down. When the dog is standing, the short, strong rear pasterns are perpendicular to the ground and, viewed from the rear, parallel to one another. When standing naturally, the hocks extend beyond the tail.

The feet are short and round, well arched, and tight. Pads are thick and black.

Tails may be natural or docked. Correctly set natural tails of any length and carriage are acceptable; sabre or sickle tails are preferred.

The docked tail is set high, carried erect, and normally docked just long enough to be visible over the backline of the dog.

A Miniature Schnauzer with a correctly set tail must not be penalized for an imperfect dock, or for having an undocked tail.

The Miniature Schnauzer is a double-coated dog with a hard, wiry outer coat and a soft, dense undercoat. The coat is trimmed by stripping, and blends into the furnishings. The dog must be presented with sufficient length of body coat so that the texture and density may be determined. The longer coat on the beard, legs, and lower body is thick and is softer than the body coat.

The Miniature Schnauzer coat must be sufficiently clean and well-groomed to enable a judge to properly evaluate the dog, but the artfulness of the trimming is not a factor to consider in judging this breed.

Fault: Any suggestion of tan or red banding.

The Black and Silver coat pattern is the same as the Salt and Pepper except that the “salt and pepper” coat area is completely black. The black color is a true rich color with black undercoat. The stripped portion is free from any fading or brown tinge and the underbody should be dark.

In the Salt and Pepper and Black and Silver, there must be a dark mask reflecting the respective color pattern.

The entire dog is solid black. The black color in the topcoat is a true, rich, solid color; it may have a brown tinge due to exposure to the sun. Occasional white hairs may appear in the topcoat. The undercoat is a less intense, flatter shade of black. A small white spot on the chest is acceptable, but not preferred.

White, with a white undercoat. White dogs must have black pigment. Occasional black hairs may appear in the topcoat.

Disqualifications: Any color or color pattern other than described above. Albinism. Pigment color other than black.

The acceptable range of height for a mature Miniature Schnauzer is from 12 to 14 inches.

A correctly made Miniature Schnauzer moves like a working dog. When trotting, the gait is effortless, smooth, powerful, and well coordinated, showing good but not exaggerated reach in front, and strong drive behind. The topline remains level with only a slight flexing to indicate suppleness. Viewed from any position, legs turn neither in nor out, nor do feet cross or interfere with each other. As speed increases, feet tend to converge toward centerline of balance.

(An Eliminating Fault is a Fault serious enough that it eliminates the dog from obtaining any awards in a conformation event.)
A mature Miniature Schnauzer under 11 inches or over 15 inches.

(A dog with a Disqualification must not be considered for placement in a conformation event, and must be reported to UKC.)
Unilateral or bilateral cryptorchid.
Viciousness or extreme shyness.
Albinism.
Pigment color other than black.
Overshot or undershot.
Wry mouth.
Any color or color pattern other than described. 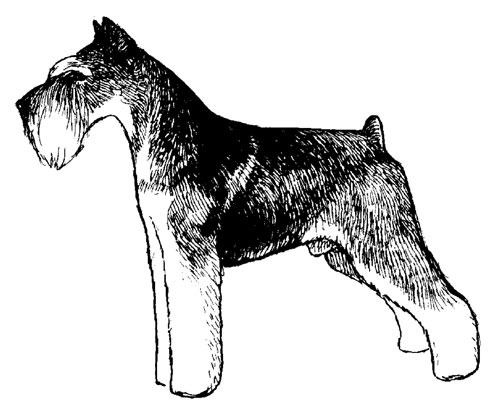