The Miniature Bull Terrier is a direct descendant of the original bull-and-terrier crosses made in England in the early 19th century, specifically to bait bulls and, later, to fight in pits. They are a smaller version of the Bull Terrier, identical to that breed except in size.

The Miniature Bull Terrier was recognized by the United Kennel Club on January 1, 1993.

The Miniature Bull Terrier is strongly built and muscular, presenting a symmetrical appearance, with a determined and intelligent expression. The breed is active, with a sweet disposition and is responsive to discipline. Dogs should look masculine; bitches should look feminine.

Although their appearance is one of strength and agility, the breed is peaceful and tractable, with a jaunty air. The breed is categorized in two color varieties, white and colored, but is shown as one breed in UKC conformation events. The egg-shaped head, complete with naturally erect ears and small triangular eyes, give the breed a distinctive appearance.

The head is long, strong and deep right to the end of the muzzle. The face is full and oval in outline and filled in completely, giving the impression of fullness, with no hollows or indentations (i.e., egg-shaped), without excessive muscle in the cheeks. In profile, it curves gently downward from the top of the skull to the tip of the nose. The distance from the tip of the nose to the eyes is noticeably greater than the distance from the eyes to the top of the skull.

The forehead is flat across, from ear to ear.

The underjaw is deep and well defined. The lips are clean and tight.

A full complement of strong, even, white teeth meet in a scissors bite.

The eyes are well sunken and small, with a piercing glint. They should be as dark as possible. They are small, triangular in shape, and obliquely placed, set near together and high up on the head.

The nose is black and bent downward at the tip. Nostrils are well developed.

The ears are small and thin. They are placed close together, and should be capable of being held stiffly erect, and should point upward.

The long, muscular neck is arched and clean, tapering from the shoulders to the head. It is free from loose skin.

The shoulders are strong and muscular, but not heavy. The shoulder blades are wide and flat. There is a very pronounced backward slope from the bottom edge of the blade to the top edge, forming a nearly 90-degree angle with the upper arm.

The forelegs have strong, round bone and are perfectly straight and parallel, providing a strong base of support. Length of forelegs in mature dogs is approximately equal to the depth at the brisket. The elbows turn neither in nor out. The pasterns are strong and upright.

When viewed from the front, the chest is broad. There is great depth from the withers to the brisket, the brisket being nearer to the ground than the belly. The underline forms a graceful upward curve. Ribs are well sprung and the back is short and level behind the withers. Slight arch over the broad, muscular loin.

Muscular, with well-developed second thighs and good angulation at the stifle and hock.

Parallel when viewed from behind, with short, strong rear pasterns.

The feet are round and compact. The toes are well arched.

The tail is short, set on low, and carried horizontally. It is thick at the root, tapering to a fine point.

The coat is short, flat, glossy and harsh to the touch. The skin fits tightly.

The breed is categorized in two color varieties: White and Colored.
White: The dog is white, though markings on the head are permissible. Skin pigmentation on the body is permissible.

Colored: Any color other than white. The preferred color is brindle, but they may also be red, fawn, and tricolor. May have white markings, but color predominates.

The Miniature Bull Terrier should not exceed 14 inches in height at the withers. There is no weight limit, but there is an impression of maximum substance in relation to the size of the individual dog.

The Miniature Bull Terrier moves smoothly, exhibiting a free, easy, ground-covering stride. When viewed from front or rear, front and hind legs move parallel to each other. The forelegs reach out well. The head is carried high, and the back remains level. The hind legs move smoothly at the hip, flexing well at the stifle and hock. The dog exhibits a jaunty air, suggesting agility and power.

Departures from the above standard are judged as faults; their severity determined by the degree of deviation from the ideal. 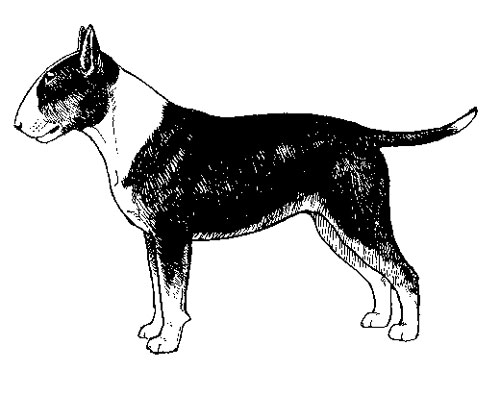