The giant Mastiff may have originated in Asia, but England has been considered its adopted country for nearly 2,000 years. The breed has a long history as a fighting dog, protector of the home, and for use against other animals and as a weapon in war. In America, the breed is now noted as a devoted family pet and may still serve as a protector mainly by its imposing size.

The Mastiff was recognized by the United Kennel Club in 1948.

The Mastiff is large, massive and powerfully built, with a well-knit frame. Breadth is greatly desired. Larger is better, as long as the size is combined with quality.

The breed exhibits a unique combination of grandeur, good nature, courage and docility. Capable of guarding.

The head gives a massive appearance from any angle.

The skull is broad and somewhat rounded between the ears. The forehead is flat, showing wrinkles when the dog is at attention. The brows are moderately raised. The muscles of the temples and cheeks are well developed The arch across the skull is a flattened curve, with a furrow up the center of the forehead which extends from between the eyes to halfway up the skull.

The muzzle is short (one-third the length of the entire head), and broad under the eyes. There is virtually no taper in width from the eyes to the nose. The end of the muzzle is blunt and square, and very deep. The lips are slightly pendulous, to show a square profile.

A full complement of strong, white teeth meet in a scissors or level bite. A moderately undershot bite is permissible providing the teeth are not visible when the mouth is closed.

Serious Fault: Incisors visible when the mouth is closed.

The nose is broad, flat in profile, and always dark, the blacker the better, with open nostrils.

The eyes are small, and set wide apart. They are brown in color, the darker being preferred.

The ears are small, V-shaped, rounded at the tips, and are set widely apart at the highest points on the side of the skull. The leather is moderately thin. The ears lie close to the head and are dark in color, the darker the better, conforming to the muzzle color.

The slightly-arched, powerful, very muscular neck is of medium length, and does not show any excess of loose skin. There is a gradual increase in the circumference of the neck as it approaches the shoulder.

The forelegs are straight and strong, set wide apart and heavy boned. The elbows are parallel to body. The pasterns are strong and only slightly bent.

The chest is well rounded, wide and well let down, extending to the elbows. The ribs are extremely well rounded. The “false” ribs (11th and 12th) are deep and well set back. The back and loin are very muscular, flat and wide.

The hindquarters are broad and muscular.

The second thighs are well developed. The hocks are bent, wide apart and squarely set when walking or standing.

The tail is set moderately high and reaching to or little below the hock, tapering to the end and forming a slight curve, but never carried over the back when dog is in action. It is wide at the root and tapers to the end.

The feet are large, rounded and compact, with well arched toes. Black nails are preferred.

Short and close-lying, not too fine over shoulders, neck and back.

Acceptable colors include silver fawn, dark fawn-brindle and apricot. Fawn-brindle always has fawn as a background color completely covered with very dark stripes. In all cases, the muzzle, ears and nose must be black in color.

The gait projects the evidence of great power and strength. The rear legs have drive. The forelegs track smoothly with good reach. As speed increases, the dog single tracks. 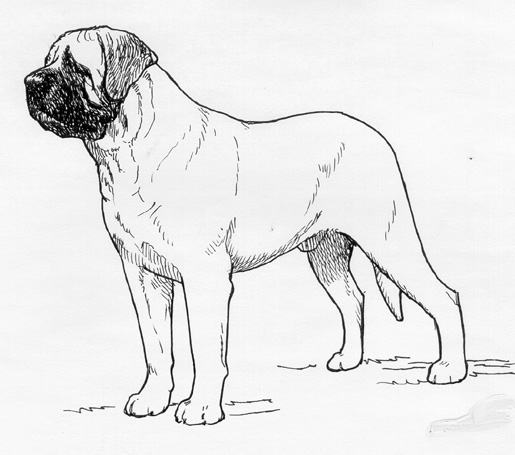