The Manchester Terrier is a direct descendent of the early English Black and Tan Terrier, which was highly prized for its working ability as a "ratting" dog in the industrial areas of the North of England. These early dogs were more rugged than the breed is today, but the Manchester still maintains the physical structure of a working terrier. When first officially classified, all smooth-coated, black and tan terriers (including the smaller, Toy, variety) were called Old English Terriers. The present breed type was said to be influenced by the possible introduction of Whippet blood for refinement, plus the Bull Terrier and White English Terrier.

Samuel Handley of Manchester, England, is credited with stabilizing the breed. As a result of his efforts the breed became known as the Manchester.

The Manchester Terrier was recognized by the United Kennel Club in 1992.

The Manchester Terrier is a small, compact, smooth-coated dog, with an elegant appearance. It is always black and tan in color, and it comes in two size varieties, standard and toy. Except for weight and ear cropping options, there are no differences between the two varieties.

Alert and happy, not aggressive or shy, and agreeable with other dogs since this is not a sparring terrier breed.

The head is a long, flat and narrow wedge, well filled under the eyes and with no prominence of cheek. There is the impression of a slight stop.

The skull is flat, tight skinned, and has a slight indentation up the forehead.

Tapering in width slightly from the eyes to the nose, with tight lips.

The small bright, sparkling eyes are almond in shape, and set moderately close together. In color, they are as near black as possible.

Faults: Protruding eyes. Eyes that sink in the skull.

Each variety has specific criteria regarding the ears.

The thin, naturally erect ears are set well up on the skull and rather close together. They are moderately narrow at the base and have pointed tips.

The small thin ears may be natural or cropped. If natural, they may be erect or button type. They are wider at the base, tapering to a point. If cropped, they come to a point, are long and carried erect.

The clean, slim, graceful, slightly arched neck is of moderate length. It gradually becomes larger as it approaches the shoulders, into which it blends smoothly.

The shoulders are clean and sloping.

The forelegs are straight and set well back under the body. Their length from elbow to ground is half the height at the withers.

The body is moderately short. Chest is narrow and deep. Ribs are well sprung. There is a slight arch over the loin, and the croup falls slightly to the set on of the tail. Good tuck-up.

Faults: Flat loin or roached back.

Straight and parallel when viewed from behind. Stifles are well bent.

Small, and oval in shape, with well-arched toes.

The moderately short tail is thick where it joins the body and tapers to a point. It is set on at the end of the back arch and is not carried higher than the back.

The smooth, short, glossy coat is thick and dense.

The only acceptable color is jet black and rich mahogany tan that are clear and distinct from each other, abruptly forming clear, well-defined lines of color division.

Tan markings include: a small spot over each eye; a very small spot on each cheek; on the lips of the upper and lower jaws, to extend under the throat and ending in the shape of the letter V; inside of the ears; under the tail; and on the vent. "Rosettes", tan spots on each side of the chest above the front legs, are more pronounced in puppies than in adults.

There are black "thumb mark" patches on the front of each foreleg, between the pastern and the knee. There is a distinct black "pencil mark" line running lengthwise on the top of all toes. The rest of the forelegs are tan to the knee. On the hind legs, the tan continues from the feet penciling up the inside of the legs to a little below the stifle joint. The outside of the legs are black.

Serious Fault: White on any part of the coat.
Disqualification: Any color other than black and tan.

Weight in the Toy variety is not to exceed twelve (12) pounds (i.e.-up to and including 12 pounds).

Weight in the Standard variety includes dogs weighing more than, but not including, twelve (12) pounds up to, and including, twenty-two (22) pounds.

Straight and free, with good reach and drive.

(A dog with a Disqualification must not be considered for placement in a conformation event, and must be reported to UKC.)
Unilateral or bilateral cryptorchid.
Viciousness or extreme shyness.
Albinism.
Any color other than black and tan.

Please Note: In UKC Conformation Shows, this breed is shown by variety in this order: Toy, Standard. 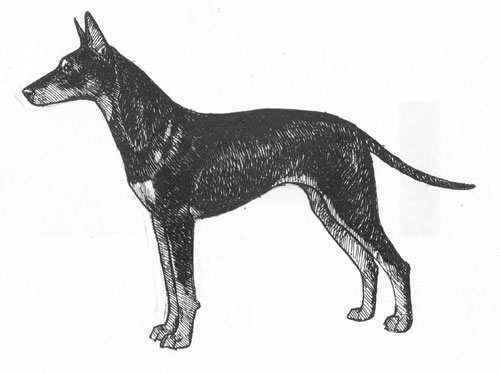