Since ancient times, seafaring people of the Mediterranean region exchanged domesticated animals as they visited the harbors and coastal settlements of the various regions. Large, strong dogs that were used as watch and guard dogs became established in the Iberian Peninsula. In Spain, this mastiff type dog was often used as a hunting or bull fighting dog. Hence the name that they were referred to at the time, “Ca de Bou”, or Bull Dog. The breed was established in the Spanish Stud Book in 1923. They were first exhibited in Barcelona in 1929.

The Majorca Mastiff was recognized by the United Kennel Club July 1, 2006.

A medium size, typically Mastiff type of dog, rectangular in appearance, strong and powerfully built. The difference between the sexes is readily apparent in the head, which is much greater in circumference in males than in females.

Quiet by nature, but when challenged the Majorca Mastiff can be courageous and brave. He is at ease with people and devoted to his master. He is an excellent watch and guard dog, very self assured.

The head is strong and massive.

Large, broad and almost square. In males, the circumference of the head is greater than that of the chest measurement taken at the withers. The forehead is broad and flat. The frontal furrow is well defined. The upper planes of the skull and muzzle are almost parallel. The stop is strongly defined seen from the side, with a protruding brow.

The muzzle is broad and conical. In profile, it resembles a blunt cone with a broad base. The nasal bridge is straight. The muzzle is short, one third the length of the skull. The jaw muscles are well developed and protruding. The upper lip covers the lower lip to the middle part of the muzzle, where the corner of the mouth appears. The flews are not pendulous.

The Majorca Mastiff has a complete set of evenly spaced, white teeth meeting in a reverse scissors bite. It is not so undershot that the teeth show when the mouth is closed.

Large, oval in shape, set wide apart and deeply in their sockets. No white or haw should be visible when the dog is looking straight ahead. Eye color should be as dark as possible depending on the color of the coat.

Rose ears, rather small and set on high. In repose, the tip of the ear is below the line of the eye.

Strong and thick, roughly the same diameter as the head, with loose skin and a thin dewlap.

Shoulder blades and upper arms are moderately short and slightly slanting. They are set well apart.

Because of the width of the breast, the elbows stand away from the chest, but are not turned out. The forearm is well muscled and straight with strong bone.

The ribcage is somewhat cylindrical in shape. The chest is deep to the elbows, and very broad, causing the tops of the shoulder blades to be wide apart. The loin is short, arched and relatively narrow. The dog stands slightly higher at the hip bones than at the withers, and the croup slopes at an angle of 30 degrees. There is little tuck up.

Fault: Dogs that stand higher at the withers than at the hipbones.

The muscles of the hindquarter are broader than those of the forequarter.

The upper thigh is naturally angulated with the pelvis. The rear pasterns are short, straight and strong.

Set on low, thick at the base, tapering towards the tip. Hangs naturally in repose and in action it is raised in a slight curve to the height of the topline.

Fault: Screw tail, such as in a Bulldog.
Disqualification: Docked tail.

Short, and rough to the touch.

Brindle, fawn and black, in that order of preference. In brindle, the darker tones are preferred. In fawn, the deepest shades are preferred. White is permitted on the front feet, the chest and the muzzle, up to 30% of the entire dog. A black mask is also permitted.

Disqualifications: White that takes up more than 30 percent of the body. Any color patches other than white.

(A dog with a Disqualification must not be considered for placement in a conformation event, and must be reported to UKC.)
Unilateral or bilateral cryptorchid.
Viciousness or extreme shyness.
Albinism.
Docked tail.
Cropped ears.
Overshot bite.
White that takes up more than 30 percent of the body.
Any color patches other than white. Yellow eyes. 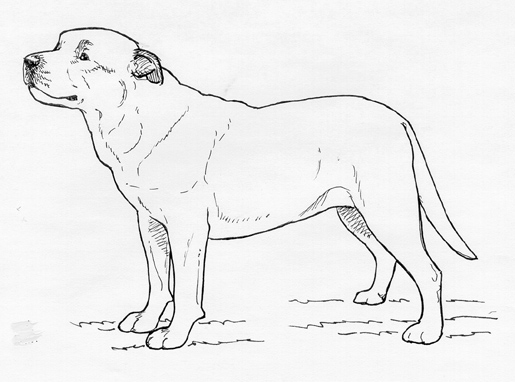