The Lundehund, also known as the Puffin Dog and the Norwegian Lundehund, is native to Norway, and is believed to be a very ancient breed.

The breed is believed to have developed certain unique characteristics so it would be better suited for locating the native Puffin nests on the steep rocks around the fjords and along the shore. These characteristics include: extra toes, a double-jointed neck, and extremely flexible forelegs.

The Lundehund was recognized by the United Kennel Club on January 1, 1995.

It is alert, energetic, and lively of temperament.

The head is clean cut, medium width, and wedge shaped.

The skull is slightly domed. The occiput is evident and visible. The stop is pronounced, but not sharp.

The muzzle is wedge shaped with a slightly convex nasal bridge.

A full complement of strong, white teeth meet in a scissors bite. A level bite and a moderate undershot bite are acceptable. A lack of premolars on both sides, on both the top and bottom jaw, is quite common.

The eye openings are slightly slanted. The eyes do not protrude. The iris is yellowish brown, with the pupil surrounded by a dark halo.

The triangular ears are of medium size. They are broad at the base, carried erect, and are very mobile.

The clean cut, rather strong, medium length neck has a rather rich color. The neck is double-jointed, so that the head can be bent backward, almost touching the back.

The forequarters are moderately angulated.

The forearms are straight. The forelegs are extraordinarily flexible, being able to turn to the side at 90-degree angles.

The body is rectangular in shape. The back is strong and straight. The croup slopes slightly. The long chest is of medium width; is relatively deep and spacious. There is a slight tuck-up.

The hindquarters are moderately angulated and strong.

The upper and lower thighs are muscular. The position of the hind legs is somewhat narrow.

The oval-shaped forefeet turn slightly outward. There are six toes on the forelegs, and at least five should take part in supporting the dog. The front feet have eight pads each. The inside plexus of the toe consists of one three-joint, and one two-joint toe, with the corresponding tendon and muscle apparatus, giving the paw a strong appearance.

The oval-shaped hind feet have at least six toes each, four of which take part in supporting the dog. The hind feet have seven pads, because the large center pad and the one between toes number 0 and 1 have grown into one, the center pad thereby seeming to be prolonged backward. When the dog stands on normally level ground the weight of the body must be evenly distributed on the pads.

The medium-short tail is set on high. It is densely coated, but does not have a flag. The tail is carried ring-shaped, slightly rolled over the topline, or hanging. It is not to be rolled, as those of the Norwegian Buhund and Norwegian Elkhound. The tip of the tail should not be too much over to the side or down the flank.

The breed is double coated. The outer coat is rough and dense. The undercoat is soft.

Hair is short on the head and front of the legs. It is richer around the neck and down the back of the thighs. The tail is densely coated, but does not have a flag.

Movement is light and elastic. An external rotary action of the forelegs and somewhat close action of the hind legs is characteristic. 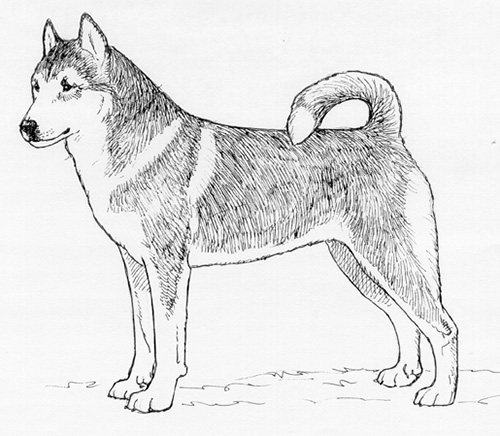