The origins of the Louisiana Catahoula Leopard Dog are unknown but it is believed to be descended from crosses between Native American dogs, Red Wolves (some of whom lived as pariahs on the outskirts of Indian villages), and the dogs brought to the New World by Spanish conquistadors, probably mastiff-types and sighthounds. Some experts believe Beaucerons were added to the mix when the area was settled by the French. White settlers in Louisiana found the Native Americans using these unusual-looking dogs to hunt a variety of wild game, including deer, bobcat, wild hog, and bear. The new arrivals soon came to appreciate this versatile breed that was equally capable of scenting, trailing and treeing game, or baying and herding feral hogs and cattle.

There are many stories regarding the origin of the breed’s exotic name: Catahoula. The most likely is that it is a corruption of the Indian word that meant “Choctaw,” the name of a local tribe.

The only thing certain is that the Louisiana Catahoula Leopard Dog is an all-American, multi-purpose working dog. On July 9, 1979, the governor of Louisiana signed a bill making this breed the official State Dog of Louisiana.

The Louisiana Catahoula Leopard Dog was recognized by the United Kennel Club on January 1, 1995.

The Louisiana Catahoula Leopard Dog is a medium to medium-large, short-coated dog, with a broad head, small-to-medium drop ears, and an undocked tail set on as a natural extension of the topline. The Catahoula is well muscled and powerful, but not bulky, giving the impression of agility and endurance. The Catahoula is a moderate breed and should not resemble either a sighthound or a bulldog in appearance. The body is just slightly longer than tall and the distance from the elbow to the ground should equal 50-60 percent of the dog’s height from the withers to the ground. Because of the breed’s name, many people assume that all Catahoulas have the so-called “leopard” markings and blue eyes. In fact, the breed is noted for its many and unusual coat colors and patterns, as well as varied eye color. The Catahoula should be evaluated as a multi-purpose working dog, and exaggerations or faults should be penalized in proportion to how much they interfere with the dog’s ability to work.

Catahoula temperament ranges from serious and business-like when working to clownish at home, with varying levels of energy. It is not uncommon for Catahoulas to be aloof with strangers, which often results in a lack of animation when showing and may cause some to draw away from judges when being examined. Catahoulas should never be excessively aggressive or shy. They can be independent, protective and territorial so they require firm guidance and a clear understanding of their place in the family unit. Catahoulas are affectionate, gentle and loyal family companions.

The head is powerfully built without appearing exaggerated. Viewed from the side, the length of skull and muzzle are approximately equal in length, and joined by a well-defined stop of moderate length. The planes of the topskull and the bridge of the muzzle are roughly parallel to one another. There may be a slight median furrow between the eyes and running back to the occipital bone. Gender differences should be apparent in the characteristics of the head.

The skull is broad and flat. The cheeks are well developed.

The muzzle is strong and deep. Viewed from above, the muzzle is moderately wide and tapering toward the nose. Lips may be tight or slightly pendulous with pigment of any color or combination of colors.

The Louisiana Catahoula Leopard Dog has a complete set of evenly spaced, white teeth. A scissors bite is preferred, but a level bite is acceptable. Full dentition is greatly desired, but dogs are not to be penalized for worn or broken teeth.

Nose pigment may be any color or combination of colors.

Ears are drop, short to medium in length, moderate in size, and proportionally wide at the base, gradually tapering to the slightly rounded tip. They should fold over and be generally triangular in shape. The top of the ear fold is level or just slightly below the top line of the skull. When the dog is at attention, the inner edge of the ear lies close to the cheek. Laid-back ears are acceptable but not preferred.

Faults: Any ear type other than described above.
Disqualification: Cropped ears.

The neck is muscular and of good length, without being overdone. The circumference of the neck widens from the nape to where the neck blends smoothly into the shoulders.

Faults: Neck too short and thick or too thin and weak; excess skin forming dewlap.

The shoulders are strong and smoothly muscled. The shoulder blades are long, wide, flat and well laid back. The upper arm is roughly equal in length to the shoulder blade and joins it at an angle sufficient to ensure that the foot falls under the withers. The elbows are close to the body and do not turn out.

The forelegs are straight, and of medium bone, indicating strength without excessive thickness. Pasterns are strong, short, and slightly sloping. The length of the forelegs should roughly equal 50-60% of the dog’s height at the withers. A dog with legs shorter than the ideal is to be more heavily penalized than a dog with longer legs.

Faults: Forequarters significantly heavier than hindquarters; bone too heavy or too fine; straight shoulders; out at elbows; weak pasterns.

A properly proportioned Louisiana Catahoula Leopard Dog is slightly longer than tall. The topline inclines very slightly downward from well-developed withers to a level back. The back is broad and well muscled with a short, strong, slightly arched loin. A slightly longer loin is acceptable in females. The ribs extend well back and are well sprung out from the spine. The chest is deep, reaching at least to the elbows, and moderately broad. When viewed from the side, the forechest extends in a shallow oval shape in front of the forelegs. Tuck-up is apparent, but not exaggerated. Croup is medium to long and slightly sloping. A slightly elevated rear resulting from slightly straighter rear angulation should not be penalized too severely.

Faults: Chest too broad, too narrow or too shallow; soft topline; exaggerated or absent tuck-up; loin too long.

The stifles are well bent, and the hocks are well let down. When the dog is standing, the short, strong rear pasterns are perpendicular to the ground and, viewed from the rear, parallel to one another.

Good feet are essential for a working dog. Feet are well knit and oval in shape. Toes are long, webbed and well arched. Pads are thick and hard. Nails are strong. Dewclaws may be removed.

The tail is a natural extension of the topline. It is thicker at the base, and tapers to the tip. Natural bob tails are permitted, but not preferred. The natural bob tail, regardless of length, will taper in width from base to tip. A full length tail may be carried upright with the tip curving forward when the dog is moving or alert. When the dog is relaxed, the tail hangs naturally, reaching to the hock joint. Catahoulas should be allowed to carry their tails naturally when being shown. Exhibitors should not hold tails upright.

The Catahoula has a single coat, short to medium in length that lies flat and close to the body. Texture ranges from smooth to coarse, without preference.

Disqualifications: Long coat; fuzzy coat that obscures the outline of the dog.

Catahoulas come in an endless variety of coat colors and patterns. All color combinations and patterns can have color points or trim, which may be located on the chest, cheeks, above the eyes, on the legs, underbody or under the tail. The Leopard pattern has a base color, with contrasting spots of one or more other colors. Solids have a single coat color. Brindles may have a light or dark base coat color with contrasting stripes. The Patchwork pattern may or may not have one predominant solid color with one or more different size patches of different colors and shades placed randomly on the body. In dogs of equal quality, rich, deep colors are preferable to the lighter colors. However, in evaluating the Catahoula as a true, multi-purpose working dog, coat color is not a primary consideration. No coat color or pattern is preferred.

Ideal height at maturity for males is 24 inches, and for females, 22 inches, with a variation of two inches either way acceptable. Weight may range from 50 to 95 pounds, in proportion to the dog’s height. The Louisiana Catahoula Leopard Dog must be both powerful and agile so actual weight and height are less important than the correct proportion of weight to height. Catahoulas should always be presented in hard, working condition. Any deviation from the ideal must be judged by the extent of the deviation, and the effect it has on the dog’s ability to work.

When trotting, the gait is smooth, fluid and effortless, showing good but not exaggerated reach in front and powerful drive behind. The topline remains level with only a slight flexing to indicate suppleness. Viewed from any position, legs turn neither in nor out, nor do feet cross or interfere with each other. As speed increases, feet tend to converge toward center line of balance. Poor movement should be penalized to the degree to which it reduces the Catahoula’s ability to perform the tasks it was bred to do.

(A dog with a Disqualification must not be considered for placement in a conformation event, and must be reported to UKC.)
Unilateral or bilateral cryptorchid.
Viciousness or extreme shyness.
Unilateral or bilateral deafness.
Cropped ears.
Long coat.
Fuzzy coat that obscures the outline of the dog.
90 percent or more white coat color.
Solid white head.
Albinism.
Complete absence of a tail (no external coccygeal vertebrae evident.) 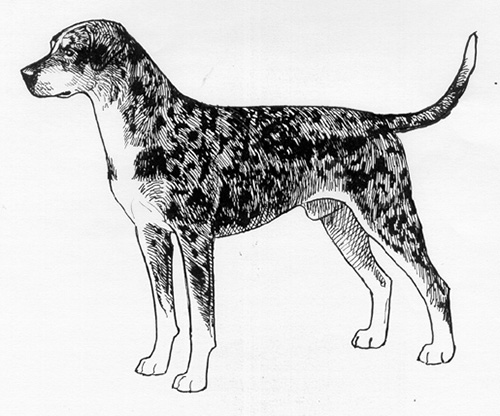