The Leonberger has been in existence since 1846. Named after the small town of Leonberg, Germany, the Leonberger's origin is credited to the mayor of the town, Herr Heinrich Essig, who lived from 1808 to 1889. Herr Hessig was an avid animal lover who had a particular fondness for very large dogs. It was his goal to breed a dog that resembled the lion that graced the town's crest.

After many years of planned breedings, which included the crossings of Landseer Newfoundlands, St. Bernards, and Pyrenean Mountain Dogs, the first true Leonberger was born in 1846.

The Leonberger was recognized by the United Kennel Club in March 1991.

The Leonberger is a large, imposing, strong, muscular, elegant dog of good proportions and balance with a weatherproof coat. He is self-confident, with a lively temperament.

The breed is loyal, clever, easily taught and very fond of children. It is an excellent family dog and also makes an excellent working farm dog. The Leonberger is particularly fond of water.

The head is strong, but not heavy, appearing deeper than it is broad, elongated rather than stocky. The length of the muzzle and the length of the skull are approximately equal. The stop is clearly visible but not abruptly defined.

The skull is slightly arched when viewed either from the front or the side. It is slightly wider between the ears than at the eyes.

The muzzle is rather long and never pointed, but slightly deeper at the stop than at the tip. The nasal bridge is broad from stop to tip. The foreface is never concave; instead it is slightly arched (Roman nose). The lips are close fitting with no gap at the corner and are black in color.

The eyes are medium size, oval in shape and light to dark brown in color, with dark brown preferred. They have an intelligent, friendly appearance. The eyelids are close fitting and no haw should show.

Fault: Round eyes.
Disqualifications: Yellow (without any trace of brown pigment) or wall eyes. Entropion or ectropion.

Well-rounded, medium sized drop ears are set high and close to the head. The leather is thick and fleshy.

The neck is rather long and not thick. It is arched at the crest and free of throatiness or dewlap, and fits smoothly into the shoulders.

Fault: Too short in neck.

The shoulder blades and upper arms are long and sloping, forming near right angle.

The legs are very strong, especially in males. They are straight, parallel and not too close together. The elbows lie close to the ribcage. The pasterns are firm and nearly vertical.

In proportion the Leonberger is slightly longer than tall when measured from the prosternum to the buttocks and the withers to the ground. The depth of the chest is nearly fifty percent of the height at the withers. The chest reaches to the elbows and is broad but not barrel in shape, rather oval in cross section. The withers are pronounced, especially in males. The back is firm, straight and broad. The loin is broad, strong and well muscled, leading into a broad, relatively long, gently rounded croup. The underline is only slightly tucked up.

The hindquarters are broad and strongly muscled. The pelvis is sloping.

The upper thigh is rather long and slanting and forms a distinct angle at the stifle with the lower thigh. The hock joint is strong and well angulated. The rear pasterns are fairly short and parallel to one another with hocks and feet turned neither in nor out.

Faults: Lack of angulation at stifle or hock. Cow hocks.

The feet are rounded and tight with well arched toes and black pads.

The tail is set at the base of a gently sloping croup. It reaches to the hock joint and is very well furnished. When in repose, the tail hangs down straight. When the dog is moving, the tail is only slightly curved and ideally should not be carried above the back. An upward curve at the end of the tail is allowed. An excited tail carriage that is higher than ideal should not be confused with an incorrect tail set.

Faults: Too high or low set tail. Tail too short. Tail carried too high and curved. Crook in end of tail.
Disqualification: Tail consistently curled over the back like a wheel.

Medium-soft to coarse in texture. Rather long, lying close to the body, straight or slightly wavy. Despite a good undercoat the shape of the body under the hair should always be visible. There is distinct feathering on the front and rear legs and a mane on the neck and chest which is more pronounced in males.

Lion yellow, red, reddish brown or sandy, all with a black mask. Black hair tips are permitted but they must not over ride the base color of the dog. Lighter shading on the underside of the tail, the mane, the feathering on the front legs and the breeches on the hind legs must not interfere with the harmony of the main color. A small white patch or stripe on the chest, and white hairs on the toes, are permitted.

Disqualifications: Off colors, such as brown (liver) with brown nose and foot pads; black and tan; silver. Complete lack of a mask. White other than specified.

Recommended average height at the withers is 30 inches for males and 27½ inches for females, with an allowable variance of one and one-half inches in either direction.

Fault: Mature dogs that are considerably under the minimum height recommendations.

Ground covering and even, with good extension in front and drive behind. From the front or rear, the legs move in a straight line. Young dogs may have some characteristic looseness to their gait but adults should have strong, well balanced movement.

(A dog with a Disqualification must not be considered for placement in a conformation event, and must be reported to UKC.)
Bilateral or unilateral cryptorchid.
Viciousness or extreme shyness.
Albinism.
Lips flesh colored or not fully pigmented.
Overshot or undershot bite.
Missing teeth except M3.
Brown nose.
Yellow (without any trace of brown pigment) or wall eyes.
Entropion or ectropion.
Brown pads.
Heavily curled or corded coat.
Off colors such as brown (liver) with brown nose and foot pads; black and tan; silver.
Complete lack of a mask.
White other than specified. Tail consistently curled over the back like a wheel. 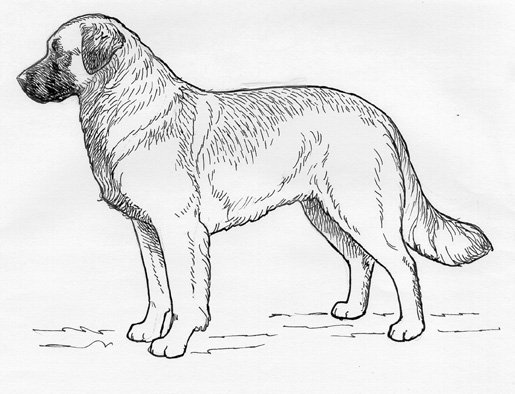