The ancestor of the Labrador Retriever was the St. John’s Retriever, a smaller version of the Newfoundland. These dogs were brought to England, probably on fishing boats. Gamekeepers crossed these Canadian imports with various breeds of gun dogs, always striving to improve the breed’s hunting and retrieving instincts. By the middle of the 19th century, the Labrador’s characteristic water-resistant coat and otter tail were already apparent.

By the late 1880s, the breed was sufficiently distinctive that “Labrador Retriever” became the generally accepted name of the breed. Originally black in color, the first recorded yellow Labrador appeared in a litter born in 1899. Chocolates were also recorded at about the same time, but never achieved the same level of popularity as the blacks and yellows.

Originally bred to retrieve from water, the modern Labrador Retriever has proven to be one of the most versatile breeds, excelling in hunt tests and field trials, in obedience and agility events, and also as service dogs.

The Labrador Retriever was recognized by the United Kennel Club in 1947.

The Labrador Retriever is a medium-sized, short-coupled, powerfully-built dog with a short, dense, water-resistant coat; small, drop ears; and a short, thick otter-like tail carried level with the back or with a slight upward curve. The length of body is equal to or only slightly longer than the height at the withers, and the distance from the elbows to the ground is equal to one-half the height at the withers.

The Labrador Retriever is an enthusiastic hunter with a good nose and a soft mouth. They excel in all performance activities. Another essential characteristic of the Labrador Retriever is the short, dense, double coat that protects the dog when retrieving from water. The short, “otter” tail is another distinctive feature of this breed. Labrador Retrievers are noted for their excellent temperaments. This breed is friendly, outgoing and eager to please. They are extremely intelligent and easily trained to perform a variety of complex tasks.

Serious Fault: Any evidence of shyness in a mature dog.
Disqualification: Viciousness or extreme shyness. Aggressiveness toward humans or other dogs.

The head is proportionate to the size of the dog, clean-cut, and without exaggeration of any sort. When viewed from the side, the skull and muzzle are approximately equal in length, and joined by a moderate stop that is defined, in part, by the moderately well-defined supraorbital arches over the eyes.

The skull is broad, but without exaggeration. There may be a slight median furrow between the eyes at the forehead, and the occipital bone is not conspicuous. Cheeks are clean.

In profile, the muzzle is powerful. The bridge of the muzzle is straight and on a parallel plane with the top line of the skull. Viewed from the top or the side, the muzzle is slightly deeper and wider at the stop than at the tip. Lips fall away in a curve toward the throat, and are neither pendulous nor squared off. Removal of whiskers is permitted but not preferred.

Faults: Snipey muzzle; muzzle too long and narrow or too short and stubby.

The Labrador Retriever has a complete set of evenly spaced, white teeth, ideally meeting in a scissors bite. Level bite is acceptable, but not preferred.

The nose leather is black on black and yellow dogs, and liver on chocolate dogs. A slight fading of nose pigment is not a fault. Nostrils must be large and open.

The eyes are medium sized and somewhat triangular in appearance, but never so much as to give a hard expression. Eye color is brown in black and yellow dogs, and brown or hazel in chocolates. Eyelids are close fitting, and eye rims match nose pigment. Expression is kindly and intelligent.

Faults: Yellow eyes; eyes too dark; eyes too small or too round and prominent; eyes set too close together; eyes protruding or too deep set; any feature that detracts from the correct Labrador expression.
Disqualification: Absence of pigmentation in eye rims.

The ears are drop, triangular in shape, and rather short, with the front edges attached well behind and just above the eyes. When pulled forward, the tip of the ear should just cover the eye. The ear leather is pliable. When alert, the ears are drawn up and forward, with the inner edges of the ears close to the cheeks.

The neck is of sufficient length to allow the dog to carry retrieved game with ease, and powerful, but not throaty. The neck is clean and blends smoothly into well laid back shoulders.

Shoulders are smoothly muscled. The shoulder blades are long and well laid back with the upper tips fairly close together at the withers. The upper arm appears to be equal in length to the shoulder blade and joins it at an apparent right angle. The elbows are close to the body and set directly under the withers. The forelegs are straight, strong and sturdy in bone, with strong, short, slightly sloping pasterns.

Faults: Too much or too little bone.
Serious Fault: Legs too short and heavy boned.

A properly proportioned Labrador Retriever is square or just slightly longer (measured from prosternum to point of buttocks) than tall (measured from the withers to the ground), and the length of the front leg (measured from point of elbow to the ground) is approximately equal to one-half of the dog’s height. Whether the dog is standing or moving, the line of the back is strong and level from the withers to the slightly sloping croup. The loin is short, muscular and deep, with little or no tuck-up in a mature dog. The ribs extend well back and are well sprung out from the spine, forming a broad, strong back, then curving down and inward to form a deep body. The brisket extends to the elbow.

Viewed from the front, the chest between the forelegs is well filled and of moderate width to allow for efficient movement and stamina. Viewed from the side, the forechest is well developed but not exaggerated.

Faults: Slab sided or barrel ribbed; chest too narrow or too wide.

The hindquarters are broad and muscular. In profile, the croup slopes slightly. The angulation of the hindquarters is in balance with the angulation of the forequarters. The stifles are well bent, and the hocks are well let down. When the dog is standing, the rear toes are just slightly behind the point of buttocks. Viewed from the side, the short, strong rear pasterns are perpendicular to the ground and, viewed from the rear, parallel to one another.

Good feet are essential for a working retriever. The feet are of medium size, round and compact with well-arched toes and thick, elastic pads. Dewclaws may be removed, but is not mandatory.

Faults: Splayed feet; hare feet; knuckling over; feet turning in or out.

The tail is a distinctive feature of the breed. It is a natural extension of the topline, very thick and muscular at the base and tapering to the tip. A tail of the correct length extends no longer than the hock. The tail is covered with the same thick, dense coat as the body, but never feathered. It is the heavy coat that gives the tail its resemblance to an otter’s tail. When the dog is relaxed, the tail hangs down naturally. When the dog is moving or alert, the tail may be carried level with the back or only slightly above level. The tail should never curl over the back or be carried between the legs. Dogs with docked or altered tails resulting from working injuries are not to be penalized.

The Labrador Retriever has a short, dense, water-repellent double coat. The outer coat lies close to the body and is straight, although a slight wave down the back is permissible. The coat texture is firm and resilient, neither coarse nor silky. Undercoat is soft and dense.

A small white spot on the chest is permissible but not preferred. White hairs from aging or scarring should not be penalized.

Disqualifications: Any color or combination of colors other than described above; albinism.

Fault: One-half inch or greater over or under the standard height at maturity.

When trotting, the gait is effortless, smooth, powerful and well coordinated, showing good but not exaggerated reach in front and drive behind. When moving, the dog’s head moves forward so that the head, backline, and tail are nearly even. The topline remains level with only a slight flexing to indicate suppleness. Viewed from any position, legs turn neither in nor out, nor do feet cross or interfere with each other. As speed increases, feet tend to converge toward center line of balance. It is recommended that dogs be shown on a loose lead and moved at a moderate speed to reflect true gait.

Poor movement should be penalized to the degree to which it reduces the Labrador Retriever’s ability to perform the tasks it was bred to do.

(A dog with a Disqualification must not be considered for placement in a conformation event, and must be reported to UKC.)
Unilateral or bilateral cryptorchid.
Viciousness or extreme shyness.
Aggressiveness toward humans or other dogs.
Nose completely unpigmented.
Absence of pigmentation in eye rims.
Any color or combination of colors other than described in the “Color” paragraph above.
Albinism. 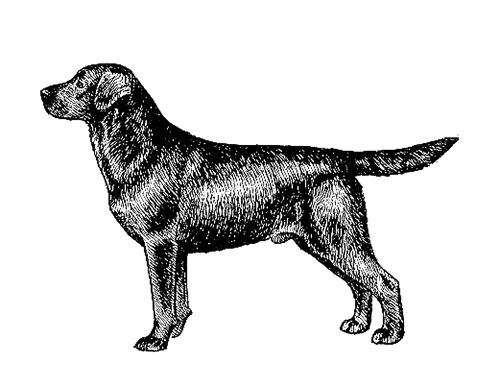