The Kuvasz (plural - Kuvaszok) is a very ancient breed. Its ancestors are believed to have been brought to Hungary, noted as its country of origin, as long ago as the 13th century. The breed is still found in that country. Their historical and present uses are as hunting dogs, flock guards and guard-companions. The first specimens of the breed were brought to the United States in the 1920's.

The Kuvasz was recognized by the United Kennel Club in 1965.

The Kuvasz is a large, sturdy, well balanced working dog; being neither lanky nor cobby. A lustrous, pure white is the preferred coat color (ivory is sometimes found, but is not preferred). The medium, hard bone is in proportion to the size of the body, never appearing heavy or coarse. They are well muscled, while never appearing bulky nor lethargic. They move freely on strong legs, while impressing the observer with their light-footedness and agility. The hindquarters, in particular, are well developed. The trunk and limbs form a horizontal rectangle that deviates slightly from a square. The croup inclines slightly.

The breed standard serves to describe the ideal dog. Any deviation from the ideal is to be penalized according to the degree of deviation. Any tendency towards weakness or a lack of substance is to be faulted.

The Kuvasz is known to be spirited, with a keen intelligence, and much determination, courage and curiosity. They are very sensitive to both praise and reprimand. They are definitely a one-family dog and are devoted, gentle and patient, without being overly demonstrative, and ready to protect loved ones to the point of self sacrifice, especially children. They are polite to strangers that are noted as acceptable, but are suspicious and discriminating about extending new friendships. The Kuvasz is unexcelled as a guard dog, being agile and able to act on its own initiative. They have the untiring ability to work and cover rough terrain for long periods of time. The breed has a well-developed scenting ability and has been used to hunt game.

The head of the Kuvasz is considered to be the most beautiful part of the dog, and therefore the details of the head are of great importance. The Kuvasz can be mainly distinguished from other breeds by its head, which is characteristically long, wedge-shaped, clean and dry. The head of the male is slightly more massive than the head of the female.

The skull is broad, with a slightly protruding forehead that has a distinct median furrow. The stop is a barely pronounced gentle slope.

The almond-shaped eyes are dark brown, the darker the better. They are set well apart and somewhat slanted. Rims are black and are tight fitting. Haws do not show.

The V-shaped ears have a slightly rounded tip. They are well set back, between the level of the eye and the top of the head. If pulled forward, the ears should cover the eye. When viewed from the front, the widest part of the ear is about level with the eye. The inner edge lies close to the cheek. The outer edge lies slightly away from the head, forming a V. When relaxed, the ears maintain their set and are not cast back. The ears do not protrude above the head.

Rather short and well muscled, without much crest. There should be no dewlap.

The shoulders are muscular, well fitted to the body, yet flexible. The long scapula and humerus are of equal length, and form an angle of approximately 110 degrees.

Relatively long and straight, with clean muscles and strong sinews. Bone is strong, but not coarse, and the joints show clear outlines. The elbows fit close to the body. The pastern is short and slightly sloping.

Viewed in profile, the body forms a slightly off-square rectangle. The chest is deep, and due to strongly developed musculature, the forechest is rounded, without a sharp protuberance of the sternum. The withers rise markedly above the line of the back. The back is medium in length, broad, firm and level. The loin is short and taut. The croup is broad, muscular and slightly sloping. Heavy coat on the croup can give the dog the appearance of being high in the rear. The ribs are slightly arched and the underline tucks up towards the flank.

The angulation of the pelvis and upper thigh matches that of the forequarter. There are long, broad massive muscles attaching the upper thigh to the pelvis.

The angle at the stifle is 110-120 degrees. The lower thigh has long muscles and strong sinews that extend to the hock. The hock joint is dry and moderately angulated. The rear pastern is long and vertical.

The well-padded feet are round or slightly oval. The rear feet are somewhat longer than the fore feet. The pads are springy and black in color. Dark nails are preferred.

The tail is set on low, following the line of the croup. In repose, the tail hangs down with an upward curve, but not a crook, in the tip. When the dog is alert, the tail may be raised to the level of the topline.

The breed is double coated. The outer guard coat is medium coarse in texture and ranges from being quite wavy to straight. The undercoat is fine, thick and wooly. Regardless of coat type, there is a definite distribution pattern over the body. A short, smooth hair coat covers the head, muzzle, ears, paws, the front of the forelegs up to the elbows, and the hind legs below the thighs. There are two- to three-inch-long feathers on the backs of the forelegs. A medium-length coat covers the body and sides of the thighs. There is four-to-six-inch-long hair found on the back of the thighs and on the entire tail. There is a neck mane that extends to and covers the chest. There may be some hair between the toes, but the less the better.

It is normal for the Kuvasz to shed most of their long coat during hot weather; this summer coat is not to be penalized. Depending on the climate, the growth of a full, luxuriant coat is seasonal.

Slate gray or black pigmentation are the preferred colors of the heavily-pigmented skin.

White, with no markings, is the only acceptable color. Ivory does occur, but is not preferred.

Disqualification: Any color other than white or ivory.

Height is measured at the withers. Preferred height ranges are: dogs, 28 to 30 inches; bitches 26 to 28 inches.

Characteristic movement is easy, free and elastic; and cannot be achieved without sufficient angulation and a firm slimness of the body. The head is carried rather low, at shoulder level, unless the dog is excited. When viewed from the front, the front legs travel rather close to each other at the ground, not parallel. When viewed from the rear, the hind legs, from the hip joint down, also move close to each other at the ground. The feet travel close to the ground. As speed increases, the dog tends to single track.

(A dog with a Disqualification must not be considered for placement in a conformation event, and must be reported to UKC.)
Unilateral or bilateral cryptorchid.
Viciousness or extreme shyness.
Albinism.
Any color other than white or ivory.
Overshot bite.
Undershot bite.
Prick ears. 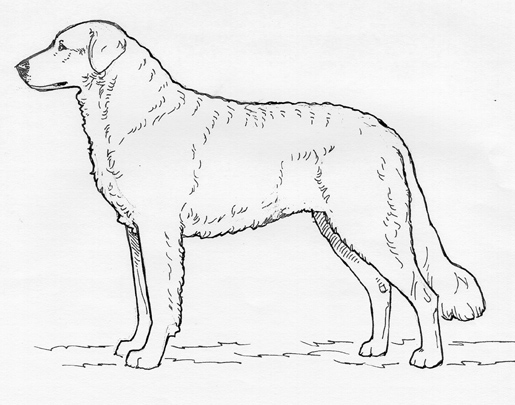