The Kromfohrlander is one of the most recent German breeds, internationally recognized only since 1955. The breed is descended from the Wire Fox Terrier and the Grand Griffon Vendeen.
The Kromfohrlander was recognized by the United Kennel Club January 1, 1996. The breed was originally in the Terrier Group, and was moved to the Companion Dog Group on June 1, 2013.

An adaptable, docile, and high spirited companion and house dog,. with a moderate hunting instinct. The breed can be somewhat reserved with strangers.

The skull is slightly round, with no frontal protuberance. There is a definite frontal furrow and a marked stop.

The Kromfohrlander has a complete set of evenly spaced, white teeth meeting in a scissors or level bite.

Medium size and oval in shape, set on a slight slant. Dark brown is preferred.

Set on high at the sides of the head, the ears are semi drop with the fold not lying above the line of the skull. They are triangular shaped with rounded tips and lie close to the head. The ears are very mobile.

Medium length, slightly arched and well muscled with no dewlap.

The forequarters are well muscled. The shoulder blade is fairly long and sloping, creating an angle of 110 degrees with the upper arm.

Straight and vertical. The elbows fit close to the body. The pastern is relatively short and slightly sloping.

The body is slightly longer than tall. The chest is moderately broad and deep to the elbow. The forechest is slightly pronounced, and the ribs are lightly rounded. The back is strong, straight and medium long. The loin is slightly narrower than the ribcage. The croup is slightly sloping. The belly is tucked up.

The angle at the hip joint is about 100 degrees.

The upper thigh is well muscled. The stifle angulation is 105 degrees. The rear pastern is short and vertical.

Not docked, medium long, strong at the base and carried saber like over the back.

There are two types of coat.

Rough coat, which is thick and rough in texture and has a beard. Over the withers and on the back the coat is not longer than three inches. It is shorter on the sides, about one inch. The hair is longer on the face and muzzle. The undercoat is short and soft.
Smooth coat, which is thick and smooth without a beard. The coat is the same length as the rough coat but lies close to the body. The tail has a plume and there is feathering on the backs of the legs. On the face and muzzle, the hair is short and smooth. The undercoat is short and soft.

Flowing and active, with even strides and good reach and drive.

(A dog with a Disqualification must not be considered for placement in a conformation event, and must be reported to UKC.)
Unilateral or bilateral cryptorchid.
Viciousness or extreme shyness.
Albinism.
Overshot or undershot bite.
Absence of more than two molars or three premolars.
Blue eyes. 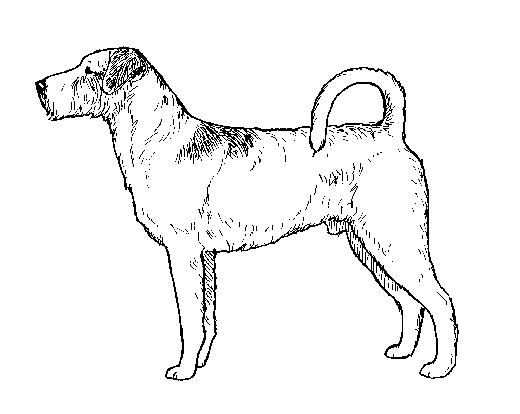