The Kooikerhondje was widely used in the 17th and 18th century by Dutch hunters to lure ducks into traps. Thereafter, however, the breed declined until Baroness van Hardenbroek van Ammerstol single-handedly rescued the breed. In the middle of World War II and during the occupation of her country by the enemy, she gave a photo of a Kooikerhondje and a lock of Kooiker hair to a peddler and instructed him to tell her when he saw any dogs that resembled the photo. The female he found for her became the foundation for the revived breed. The Kooikerhondje was recognized by the Dutch Kennel Club in 1971.

The Kooikerhondje was recognized by United Kennel Club in 1996.

The Kooikerhondje is a medium-sized dog, just slightly longer than tall, resembling a small setter or spaniel. Ears are high set and drop with a distinctive black fringe at the tips. The coat is of medium length and slightly wavy, white in color with bright orange to deep red patches. The tail is predominantly white and well feathered. Exaggerations or faults should be penalized in proportion to the degree of deviation from the standard.

The Kooikerhondje is a lively, affectionate dog equally at home as a hunting dog or a family companion. Kooikers are confident and outgoing with people they know but slightly wary with strange people and dogs. They do well with children who are brought up with them. Because of their intelligence and sensitivity, Kooikers require a firm but not domineering style of training.

Head is in proportion to the size of the body and slightly wedge-shaped. Viewed from the side, the skull and muzzle are of equal length. Stop is distinct but not too deep.

The skull is broad and slightly rounded. The cheeks are flat and the occiput is not prominent.

The muzzle tapers gently from stop to nose. Not too deep in profile.

A full complement of strong, white teeth. A scissors bite is preferred but a level bite is acceptable.

Ears are drop, hanging closed to the cheeks, of medium size and set on just above the line from the point of the nose to the outer corner of the eye. Coat on the ears should be long and feathered, red in color, with black tips preferred.

Well muscled and well set on, of medium length, with no indication of throatiness.

Shoulders are smoothly muscled. The shoulder blades are long and well laid back. The upper arm appears to be equal in length to the shoulder blade and joins it at an apparent right angle. The elbows are close to the body. The forelegs are straight, with strong, short, slightly sloping pasterns.

A properly proportioned Kooikerhondje is just slightly longer (measured from prosternum to point of buttocks) than tall (measured from the withers to the ground), and length of the front leg (measured from point of elbow to the ground) should approximately equal one-half of the dog’s height. Whether the dog is standing or moving, the line of the back is strong and level from the withers to the slightly sloping croup. The loin is moderately short, muscular and deep, with moderate tuck-up. The ribs extend well back and are well sprung out from the spine, forming a broad, strong back, then curving down and inward to form a deep body. The brisket extends to the elbow. Viewed from the front, the chest between the forelegs is well filled.

Feet are small with tight toes and covered with short hair.

The tail is a natural extension of the very slight slope of the croup. It is thick and muscular at the base and tapers to the tip. It is white in color and well feathered. A tail of the correct length extends to the hock. When the dog is relaxed, the tail hangs down naturally. When the dog is moving or alert, the tail is carried level with the back or only slightly above level. The tail should never curl over the back.

The Kooikerhondje has a water repellant double coat of medium length, with softer, dense undercoat. The coat may have a slight wave but is otherwise straight. Featherings are soft at the throat, behind the ears, and at the back of the thighs. Ears are feathered, preferably with black fringe. Forelegs are moderately feathered but no feathering below the hocks.

Distinct patches of clear orange-red color on a white background. It is preferable for red to be the predominant color. On the head, a white blaze with red cheeks and ears and black ear fringe is preferred. A white tail is preferred.

The Kooiker gait is flowing and springy, showing good reach in front and a strong driving rear. Feet should turn neither in nor out and legs travel in a straight line. As speed increases, the dog should single track, with the topline remaining level.

(A dog with a Disqualification must not be considered for placement in a conformation event, and must be reported to UKC.)
Unilateral or bilateral cryptorchid.
Extreme viciousness or shyness.
Patches of black on a white background.
Black, white, tan tri-color.
Albinism. 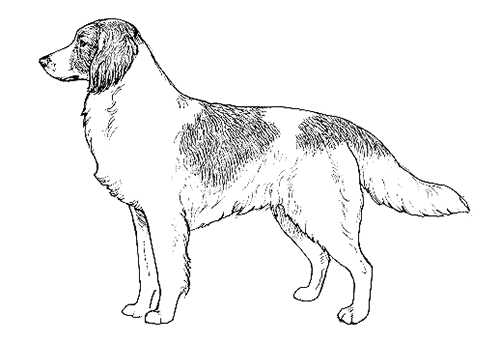