A native of Hungary, the Komondor is the largest of the Hungarian herding breeds. They are thought to be of Asian origin possibly descended from the Owtcharkas, having been developed from dogs brought to Hungary by the Magyars in the 10th Century.

The Komondor was recognized by the United Kennel Club in 1983.

General appearance is one of imposing strength, courageous demeanor and pleasing conformation. The Komondor is a big muscular dog with plenty of bone and substance, covered with an unusual long, dense, corded ivory colored coat. The breed is capable of living the majority of the year in the open, without protection against strange dogs and beasts of prey.

The Komondor, being naturally wary of strangers, makes an excellent house guard dog. They are devoted to their master and will defend him against attack by any stranger. This trait makes it advisable that the dog only be used as a herd/flock guardian/protector, not for driving. When mature, the breed is an earnest, courageous, very faithful herd/flock guardian. While a puppy, the Komondor is playful.

The thickly coated head is broad but should appear in proportion with the size of the body.

The powerful muzzle is slightly shorter in length than the skull. The bridge of the nose is straight. The jaws are very strong. The lips are black and close fitting.

The medium size, almond shaped eyes are dark brown in color and horizontally set. They have black, tight fitting rims.

The nose is wide blunt at the end. It is black in color.

The medium set, hanging ears are V or U shaped. They are devoid of erectile power.

Rather short and very well muscled. Carried nearly horizontal with the back when the dog is relaxed.

The straight, well-boned forelegs are muscular and the joints are large. The legs are like vertical columns from any angle. The limbs are firmly connected to the body.

Body shape is slightly rectangular, the length being only slightly longer than the height, measured at the withers. The chest is broad and deep, the deepest point of the brisket being half the height at the withers. The back is short, broad and muscular. The loin is of medium length, leading into a broad, slightly sloping croup. There is a moderate tuck up.

Moderately angulated to match the forequarter.

The strong, rather large feet have close, well-arched toes and thick pads that are grey. The nails are black or grey.

Low set and pendant, with a slight bend in the tip. The tail should reach to the hock. It is never carried above the level of the back.

Long, dense and double, with a coarse outer coat and finer undercoat. The unique character of the coat is determined by the relationship between the outer coat and the undercoat. The coat must naturally tend to cord or matt. The coat is longest on the croup, the loin and the upper thighs. It is a little shorter on the back, sides of chest and shoulders. It is medium length on the head, neck, ears and limbs. Length of coat corresponds to age and a younger dog is not to be penalized for a shorter coat. A combed coat is not desirable, nor is a coat that has been completely neglected.

Faults: Straight coat. Silky coat.
Disqualification: Coat that fails to cord by the time the dog is two years of age.

Disqualification: Any other coat color or combination of colors.

Light, free and even, with long strides.

(A dog with a Disqualification must not be considered for placement in a conformation event, and must be reported to UKC.)
Unilateral or bilateral cryptorchid.
Viciousness or extreme shyness.
Bobtail.
Entropion or ectropion.
Overshot, undershot or wry bites.
Prick ears.
Any other coat color or combination of colors.
Coat that fails to cord by the time the dog is two years of age. 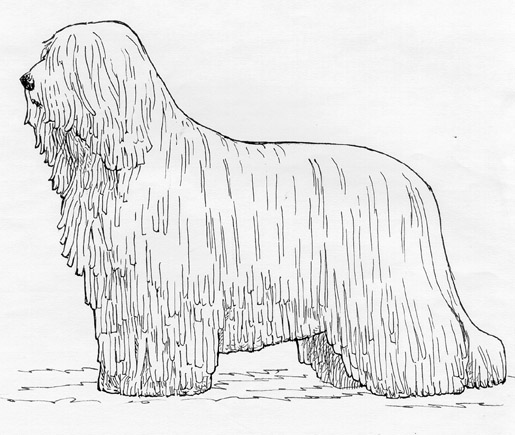