The Kishu is descended from the medium sized dogs that existed in Japan in ancient times. It became established as an individual breed in the mountainous regions of Kishu, and takes its name from the region in which it was developed. Originally, the breed was found in varying colorations, but after 1934 only solid colors were accepted. The Kishu is a hunting dog, used mainly on wild boar.

The Kishu was recognized by the United Kennel Club in 2006.

The Kishu is a medium sized, well-balanced, compact and muscular breed with prick ears and a curled or sickle tail. The breed gives the appearance of being capable of great endurance. Males are distinctly masculine and females feminine.

A noble and dignified breed, the Kishu is faithful, docile and alert.

The forehead is broad. There is an abrupt stop, with a slight furrow. The cheeks are relatively well developed.

The muzzle is wedge shaped, fairly thick, tapering but not pointed. The nasal bridge is straight and the lips are tight.

The Kishu has a complete set of evenly spaced, white teeth meeting in a scissors bite.

Generally black, but flesh colored is accepted in white dogs.

Fairly small and nearly triangular in shape, the eyes are set well apart and are dark in color.

The shoulders are moderately sloping and well muscled. Angulation between the shoulder blade and upper arm is moderate.

The forelegs are straight, with the elbows held close to the body, and the pasterns slightly inclined. Bone is strong.

In proportion, the Kishu is slightly longer than tall, measured from the breastbone to the point of buttocks and the withers to the ground. The chest is deep, and the ribs are moderately sprung. The withers are high, and the back is short and straight. The loin is broad and muscular, and the belly is well tucked up.

The toes are close and well arched. The pads are thick and elastic. The nails are hard, and preferably dark in color.

The tail is thick, set on high, and carried curled or curved like a sickle over the back. Pulled down, the tail is nearly long enough to reach to the hock joint.

Double, with a harsh, straight outer coat and a soft, dense undercoat. The hair on the cheeks and the tail is fairly long.

Height at the withers for males is 20.5 inches. For females, it is 18 inches. There is a tolerance of one inch in either direction in both sexes.

(A dog with a Disqualification must not be considered for placement in a conformation event, and must be reported to UKC.)
Unilateral or bilateral cryptorchid.
Viciousness or extreme shyness.
Albinism.
Extremely overshot or undershot bite.
Ears not pricked.
Short or hanging tail. 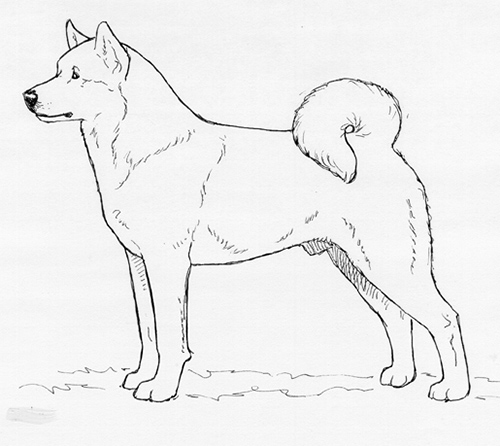