The origin of the Kerry Blue Terrier has been the subject of many theories but its true ancestors will probably never be known. The Kerry is one of three long-legged terrier breeds developed in Ireland by crofters who needed all-purpose farm dogs, capable of herding, guarding, hunting, retrieving, and vermin control. Many people consider that one of these breeds, the Soft-Coated Wheaten Terrier, is an ancestor of the Kerry Blue Terrier. It is also believed the Irish Wolfhound contributed to the development of this breed.

Notwithstanding the romantic tales of this breeds origin, the Kerry was first known as a distinct breed by the end of the 19th century. The Irish Blue Terrier, as it was called was first shown in Britain shortly before World War I, and the first Kerries were imported into the United States just after that war. Kerry Blue Terriers have been used to do nearly every canine job, including hunting, herding, and police/military work.

The Kerry Blue Terrier was recognized by the United Kennel Club in 1948.

The Kerry Blue Terrier is a compact, muscular, medium-sized terrier with moderately long legs. The breed takes its name from its wavy, blue coat. The preferred ratio of length of body (prosternum to point of buttocks) to height (withers to ground) to is 10:9. The head is long, but not exaggerated, with small, V-shaped, button ears. The tail is set on high, carried erect, and docked to a moderate length.

Correct temperament is as essential for Kerry breed type as the blue color. The English standard describes it as disciplined gameness, and it is an intensity of spirit that gives the Kerry an alert, ready-for-action personality. The Kerry is enthusiastic but strong-willed, so training can be a challenge. Kerries thrive with lots of human companion-ship, provided the owner is at least as strong-willed as the dog. The Kerry Blue Terriers thick, wavy coat requires regular grooming to maintain a smart, tailored appearance.

The head is long, but proportionate to the size of the body. When viewed from the side, the skull and muzzle are of roughly equal length, parallel to one another, and joined by a slight stop.

The skull is flat and of moderate width, tapering slightly toward the muzzle. Cheeks are flat and clean.

The muzzle is sufficiently wide and deep to balance the skull. The underjaw is strong. There is a minimum of falling away under the eye, giving a moderately chiseled look. Lips are tight and darkly pigmented.

The Kerry Blue Terrier has a complete set of good-sized, evenly spaced, white teeth. A scissors bite is preferred but a level bite is acceptable.
Serious Fault: Undershot.

Button ears are proportionate to the size of the dog, set on high, and of moderate thickness. The ears are carried close to the cheeks with the top fold of the ear slightly above the level of the skull.

Fault: Any deviation from the standard that contributes to a hound-like ear.

The neck is of moderate length, carried proudly with a slight arch at the crest. The neck widens gradually from where it joins the skull to where it blends into well-laid back shoulders. The skin on the neck is tight and without dewlap.

Shoulders are long, fine, well laid back and well knit. The upper arm is long and forms an apparent 90 degree angle with the shoulder blade.

The forelegs are straight, viewed from any angle, and moderately long. The elbows are set close to the body but able to move freely in action. The pasterns are short, powerful, straight, and flexible. When viewed in profile, the pasterns are nearly erect.

The ribs extend well back and are well sprung from the spine, then flattening to form a deep body extending to the elbows. The back is short and level, blending into a short, powerful loin with a slight tuck-up. The croup is nearly flat. Chest is deep but only moderately wide.

The hindquarters are strong and muscular. The bone, angulation, and musculature of the hindquarters are in balance with the forequarters. The stifles are well bent, and the hocks are well-let-down. When the dog is standing, the short, strong rear pasterns are perpendicular to the ground and, viewed from the rear, parallel to one another.

The feet are fairly round, moderately small, well arched, and tight. Pads are hard, tough, and well cushioned, with no cracks. Toenails are strong and black. Front dew claws may be removed.

The tail is set on high, customarily docked to a moderate length, and carried erect, the straighter the better.

The Kerry Blue Terrier is a single-coated dog. The coat is soft, dense, and wavy.

Any shade of blue is permissible. Color is fairly uniform except distinctly darker to black colors may appear on the muzzle, head, ears, tail, and feet. Kerry Blue Terrier puppies are born black or nearly black. As they mature, the color goes through stages, which include black, very dark blue, shades of brown, and mixtures of these. The coat progressively clears from these colors to the correct mature color by the time the dog reaches the age of 18 months. Until a dog is 18 months of age, deviations from correct mature color will not be penalized and any doubt as to whether a dog is black or very dark blue shall be resolved in the dogs favor.

The ideal height for a mature male Kerry Blue Terrier is 18 inches at the withers, slightly less for a bitch. The preferred range for mature males is 18 to 19 inches, and 17 to 19 inches for mature females. Judges may reward an otherwise superior Kerry Blue Terrier whose height is outside the preferred ranges unless it is a mature male over 20 inches or under 17 inches, or a mature female over 19 inches or under 17 inches. Height minimums do not apply to dogs under 12 months of age.

A well-made Kerry Blue Terrier carries himself with pride and purpose. When trotting, the gait is effortless, smooth, powerful, and well coordinated, showing good but not exaggerated reach in front and drive behind. The topline remains level with only a slight flexing to indicate suppleness. Viewed from any position, legs turn neither in nor out, nor do feet cross or interfere with each other. As speed increases, feet tend to converge toward centerline of balance. A Kerry Blue Terrier that moves like a Wire Fox Terrier is incorrect. Poor movement should be penalized to the degree to which it reduces the Kerrys ability to perform the variety of tasks it was bred to do.

(A dog with a Disqualification must not be considered for placement in a conformation event, and must be reported to UKC.)
Unilateral or bilateral cryptorchid.
Viciousness or extreme shyness.
Solid black.
Albinism. 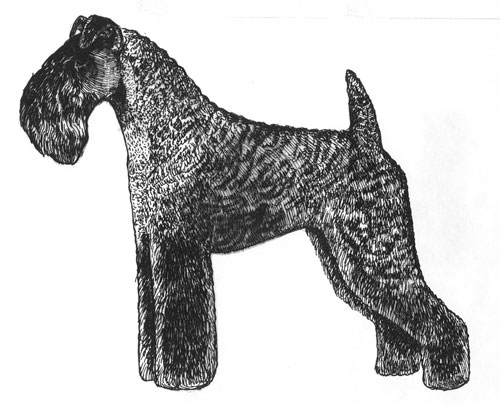