The Keeshond (“kayz-hawnd”) is a member of the Spitz (Northern Dogs) family and is of the same stock as the German Spitz, probably being a direct descendant of the German Wolfspitz. In fact, the FCI still considers the breed a Wolfspitz.

The breed has a long history of popularity with the people of Holland and was, and still is, used for a variety of jobs, including as a watch dog, for herding, for draft work and for hunting. It is also known as the “Barge Dog,” as it was customarily used on the barges as a guard and a companion.

The accepted theory for the breed name is that it was named after “Kees,” the leader of the Dutch Patriot Party, for which the little dog was the mascot.

The Keeshond is a natural, handsome dog, having a well-balanced, short-coupled body. He is distinctive not only because of his markings, alert carriage and intelligent expression, but also because of his stand-off coat, fox-like expression, small, pointed ears and his richly plumed tail that is well-curled over his back. He has a lion-like ruff around his neck, on the forepart of the shoulders and on the chest; it is more profuse in the male. His hindquarters are thickly coated down to the hocks, forming breed-characteristic “trousers.” Thick, short hair covers his head, ears and lower legs.

Correct temperament is of utmost importance. The Keeshond is outgoing and friendly, both with people and other dogs. They are a lively, intelligent, alert and affectionate companion. The distinctive Keeshond expression is largely dependent on the “spectacles,” made up of a combination of markings and shadings in the orbital area. They must include a delicate dark line slanting from the outer corner of each eye toward the lower corner of each ear, coupled with expressive eyebrows. The markings (shadings) on the face and head must present a pleasing appearance and indicate an alert and intelligent expression.
Very Serious Fault: The absence of the dark lines that form the “spectacles”.

The head is in proportion to the body. When viewed from above, the head is wedge-shaped. Not only the muzzle, but the whole head gives this impression (when the ears are drawn back by covering the nape of the neck and the ears with one hand). In profile, a definite stop is evident.

The medium length muzzle is well-proportioned to the skull. It is neither coarse nor snipey. The closely meeting lips are black; not coarse, thick, or sagging. There is no wrinkle at the corner of the mouth.

A full complement of strong, white, sound teeth meet in a scissors or level bite.

The medium size, almond-shaped eyes are set obliquely; neither too wide nor too close together. They are dark brown in color. Eye rims are black.

The small ears are triangular in shape. They are set high on the head and carried erect. Size is in proportion to the head. The length approximates the distance from the outer corner of the eye to the nearest edge of the ear.

Fault: Ears not carried erect when at attention.

The moderately long, well-shaped neck is well-set on the shoulders.

The shoulder to upper arm angulation is between slight to moderate.

The forelegs are straight from any angle. They are of good bone in proportion to the overall dog. The strong pasterns have a slight slope.

The body is compact. The back is short and straight. The topline slopes slightly downward toward the hindquarters. The loin is short. The chest is deep and strong. It is well ribbed. The barrel is well rounded. The belly is moderately tucked up.

The angulation of the hindquarters is between slight to moderate, to complement the forequarters. This assures balance and the typical gait. The hindquarters are well muscled.

The rear pasterns are perpendicular to the ground.

Fault: Tail not lying close to the back.

The breed is double-coated. The body is covered with a long, straight, harsh overcoat that stands out well from the thick, downy undercoat. The coat must not part down the back. The head, which includes the muzzle, skull, and ears, is covered with a smooth, soft, short hair that is velvety in texture on the ears. The neck is covered with a mane that sweeps from under the jaw and covers the whole of the front part of the shoulders and chest as well as the top part of the shoulders. The mane is more profuse in the male. The hair on the legs is smooth and short, except for the feathering on the front legs and the “trousers” on the hind legs. The hind legs have profuse feathering down to the hocks but not below. The hair on the tail forms a rich plume.

The Keeshond is to be exhibited in a natural state. Trimming is acceptable on the feet, pasterns, and hocks only, but not necessary. Whiskers may be trimmed. Any additional trimming is to be severely penalized.

Faults: Silky, wavy, curly coats. A part down the back.

The Keeshond is a dramatically marked dog, a mixture of gray, black and cream, which may vary from light to dark. The length of black tips on the outer hair coat produces the color shadings that are a characteristic of the breed and must be present to some degree. Puppies are often less intensely marked. The undercoat is a very pale gray or cream, but never tawny.

The muzzle is dark. The ears are very dark, almost black. The ruff (mane) and “trousers” are lighter in color than the body. The light gray shoulder line markings must be well defined. The legs and feet are cream.

Very Serious Faults: A dog that is entirely black, white, or any solid color. Any deviation from the color as stated.
Faults: Pronounced white markings on the legs and feet. Black markings more than halfway down the foreleg, except for penciling. A white foot or feet.
Disqualification: Albinism.

Height is measured at the top of the withers. The ideal heights of fully mature dogs (over two years of age) are: males, 18 inches; females, 17 inches. A one-inch variance either way is acceptable. Correct size is important, but should not outweigh that of type.

The Keeshond has a distinctive, breed-unique gait. They move boldly, cleanly, and briskly. Movement is straight and sharp. Reach and drive is between slight to moderate. While gaiting, the tail is carried over the back.

(A dog with a Disqualification must not be considered for placement in a conformation event, and must be reported to UKC.)
Unilateral or bilateral cryptorchid.
Extreme viciousness or shyness.
Albinism. 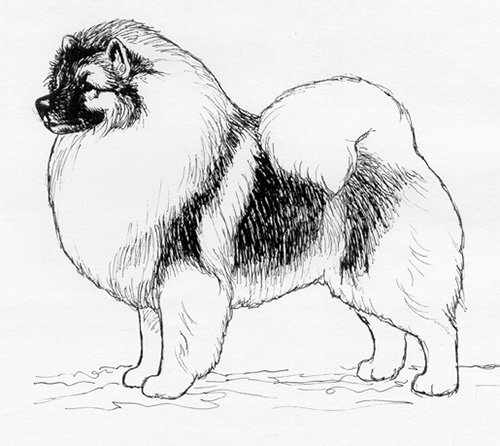