The Karst Shepherd Dog has existed for several centuries in the Slovenian region of the Karst Massif. They were originally named the Illyrian Shepherd and were grouped together under this name with the Shepherd of the Sarplaninia Massif. In 1968, the two breeds were separated by the Central Society of Yugoslavia into the Karst Shepherd Dog and the Sarplaninac, and they have been independent of one another ever since.

The Karst Shepherd Dog was recognized by the United Kennel Club July 1, 2006.

The Karst Shepherd Dog is a medium sized, well-balanced, long coated dog, with a robust appearance. He has pendant ears and a long tail and his coat is iron grey.

Courageous and valiant, but not apt to bite, the Karst Shepherd Dog is very devoted to his master and an extremely good guard dog. They are a pleasant companion, very obedient, but distrustful of strangers.

The head is proportionally large in relation to the body. It is broadest between the ears, tapering slightly in width to the nose. In profile, the head is deep and rounded.

Slightly convex in appearance when viewed from any angle, the skull is as broad between the ears as it is long. There is a moderate frontal furrow and a slight stop.

Broad and deep at the base, tapering slightly to the tip. The muzzle is slightly shorter in length than the skull. The nasal bone is straight. The lips are thick and tight, with black pigmentation.

The Karst Shepherd Dog has a complete set of evenly spaced, white teeth meeting in a scissors bite.

The nose is broad and black, and protrudes slightly in front of the end of the muzzle.

Set fairly well apart and relatively deep in their sockets, the eyes are almond in shape and chestnut or dark brown in color. They have a frank, calm, melancholic expression. The eyerims are fully pigmented in black.

The ears are moderately high set, of medium length, V shaped, with the tips reaching to the corner of the eye. They fall flat against the cheeks.

The neck is broad, thick and well muscled, with thick, tight fitting skin. There is no dewlap. The neck is furnished with a profuse ruff and mane, which makes it appear shorter than it actually is.

The shoulder blade and upper arm are long and sloping, forming a near right angle. They are well muscled and firmly attached to the body.

Long and straight, with strong bone. The elbows are close to the body. The pasterns are broad and of medium length and slightly sloping.

In proportion, the Karst Shepherd Dog is just slightly longer than tall. The withers are long and fairly high, and the back is straight and broad. The chest is very broad and deep, descending to the level of the elbows. There is well developed, rounded forechest. The ribs are moderately sprung. The loin is short, very muscular and broad. The croup is broad, muscular and slightly sloping to the set on of the tail.

Serious Faults: Sway back, high in the rear.

Well proportioned and angulated to match the forequarter.

The thighs are long and broad. There is moderate angulation at the stifle and the hock. The rear pasterns are short and heavy in bone. Dewclaws should be removed.

Round to oval in shape, with tight, well arched toes, and darkly pigmented pads and nails.

Thick at the base, and long enough to reach the hock, the tail is saber shaped, often with a slight hook at the tip. It is heavily coated, but not plumed. At rest the tail is carried low; when excited, the tail is raised to the level of the back, or slightly above it.

Long and flat, with abundant undercoat. The head, front edges of the ears, and front of the legs are covered with short hair. The backs of the ears have longer, more supple hair. The back of the neck is covered with a bushy, stiff mane, and the underside of the neck has longer, softer coat that forms a ruff. The body is well furnished with long hair that is softer on the belly and backs of the legs. The topcoat is at least four inches long.

Iron grey, darkest on the body, and shading to light grey or sandy on the belly and the limbs. There is dark streaking on the front of the legs, and a black mask on the muzzle that spreads to the skull. On the back of the head, the mask is bordered with grey or sandy or pale fawn hair that is overlaid with black.

Disqualification: Any color or combination of colors other than described.

Under the acceptable height range.

(A dog with a Disqualification must not be considered for placement in a conformation event, and must be reported to UKC.)
Unilateral or bilateral cryptorchid.
Viciousness or extreme shyness.
Albinism.
Undershot, overshot, or missing complete dentition.
Docked, bobbed or missing tail.
Any color or combination of colors other than described. 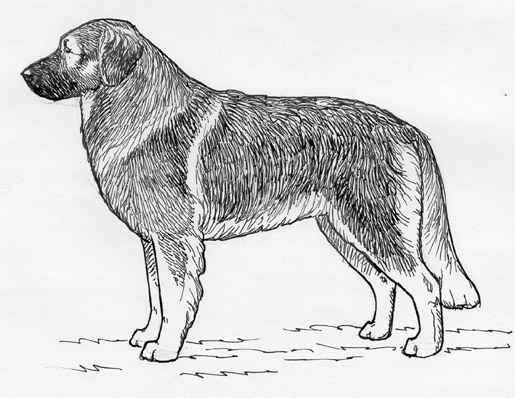