The Kai is an ancient Japanese breed that was developed as a hunting dog in the province of Kai on the island of Honshu. The Kai’s homeland is surrounded by mountains, so the breed remained geographically isolated. With the introduction of firearms, the Kai was used by professional big game hunters who specialized in hunting deer and wild boar.

The breed was not recognized in Japan until 1934 and it is still quite rare. In part because of its legendary courage, the Kai was once thought to be too primitive to serve as a family pet, but that myth has been dispelled. In the United States, the Kai has proven to be a gentle and loyal family companion.

The Kai was recognized by the United Kennel Club on January 1, 1997.

The Kai is a medium-sized, sturdily built, Spitz-type dog, with a wedge-shaped head, prick ears, and a harsh, straight brindle coat of medium length. The correct relationship of height to length of body is 10:11. The tail may be curled over the back or carried over the back in a sickle position. The appearance of the Kai is similar to the other working Japanese Spitz breeds, smaller than the Akita and larger than the Shiba.

The Kai is a sturdy, muscular dog of exceptional courage and agility. Kai have been known to climb trees and swim in pursuit of their prey. Traditional Japanese writings describe the Kai as a natural hunter, a trust-worthy guardian and extremely devoted to its master.

The brindle pattern of coat color is the Kai’s most distinguishing breed characteristic. The tail of the Kai differs from the other Japanese breeds in that it does not form a double curl but is shaped like a sickle and carried over the back.

While Kais may be somewhat reserved with strangers, they are very friendly with people that they know and they are not aggressive with other dogs. They should not be faulted for being aloof with strangers as this trait has been bred into the breed. The Kai makes an excellent watch dog or home protector.

From the front, the head forms a medium-length wedge, broad between the ears tapering to a long, but not snipy, muzzle. The head is free of wrinkles and proportionate to the length of body. The length of the muzzle, measured from stop to the end of the nose, is equal to the length of the skull, measured from occiput to stop. The skull and muzzle are parallel to one another when viewed from the side, and joined by an abrupt stop.

The skull is broad and nearly flat, with a slight median furrow. The skull tapers slightly from the widest point to the base of the muzzle. The cheeks are well developed.

When viewed from the side, the muzzle is moderately thick. It should be well filled in under the eyes. The nasal bridge is straight. The lower jaw is strong and blunt but not protruding. Lips are black and tightly closed.

The Kai has a complete set of good-size, evenly spaced, white teeth. A scissors bite is preferred but a level bite is acceptable. The tongue is generally spotted but may be pink or blue black.

The nose is solid black except in red brindles, where it may be brownish black. In profile, the nose is on the same line as the top of the muzzle and does not extend beyond the forepart of the muzzle.

The eyes are relatively small and dark brown with black eye rims. The eyes, while slightly triangular in shape, are rounder than the eyes of the Akita or Shiba.

The ears are strongly erect, somewhat large in relationship to the size of the head, triangular in shape, and set at the outer edge of the skull, but not too low. The ears are wide at the base and slightly rounded at the tips. Viewed from the side, the back line of the ear inclines slightly forward from the base to the tip.

The neck is of moderate length, thick and muscular.

Faults: Neck too short, too thin, or too weak.

The shoulders are moderately laid back, with moderate angulation and well-developed muscles.

The forelegs are straight and muscular, with heavy bone and strong, moderately short, slightly sloping pasterns. The shoulder blade and the upper arm are roughly equal in length. The upper arm lies close to the ribs but is still very mobile, with the elbow moving close to the body.

The ratio of height (measured from withers to the ground) to length of body (measured from point of shoulder to point of buttocks) is 10:11. The line of the back inclines very slightly downward from well-developed withers and then becomes level. The back is well muscled, with a short, muscular loin. The ribs are moderately sprung out from the spine, forming a strong back, then curving down and inward to form a body that would be nearly oval if viewed in cross-section. The chest is deep and moderately broad. When viewed from the side, the lowest point of the chest is immediately behind the elbow. The forechest should extend in a shallow oval shape in front of the forelegs but the sternum should not be excessively pointed. The belly is well tucked up.

The thighs are very muscular and powerful.

The rear legs have heavy bone and are moderately well angulated at stifle and hock joints. The upper thigh is long and the lower thigh is short. The hocks are tough, elastic and well let down. Viewed from the rear, the rear pasterns should be parallel to each other; from the side, they should be perpendicular to the ground.

The feet are of medium size, round in shape, well-knuckled up, with thick strong pads. Nails should be hard and black in color. Dewclaws may be removed.

The tail is thick, and set on high. The preferred carriage is a sickle tail, but a tail that curls over the back is acceptable. When the Kai is hunting, the tail sometimes straightens out behind or stands straight up. The tail should be at least long enough to reach halfway to the hock joint.

The brindle coat of the Kai has given rise to his nickname as the “Tora” (meaning “Tiger”) dog. All brindle colors are equally acceptable. Puppies are usually born with black fuzzy coats, though some are born with brindle already showing. The brindle bars emerge as the straight adult coat comes in, but they may not be fully apparent until the dog is as old as five years of age. A well-defined brindle is preferred; however, the worthiness of a dog should not be judged on the quality of its brindle pattern alone. Some dogs never brindle a lot and many lose the majority of their brindle when they blow coat. Some white is allowed on the legs, but never above the knees on the forelegs or the hock joint on the rear legs. Some white is allowed on the forechest, between the front legs and on the belly but white should never blend up into the body coat.

Faults: Dogs more than a half inch over or under these limits; obese dogs.

The Kai moves with strides of moderate length. It is a quick, agile trot, which enables the Kai to travel quickly in the mountains and forests while hunting. Correct movement is essential in this breed.

(A dog with a Disqualification must not be considered for placement in a conformation event, and must be reported to UKC.)
Unilateral or bilateral cryptorchid.
Viciousness or marked shyness.
Missing more than four teeth.
Albinism. 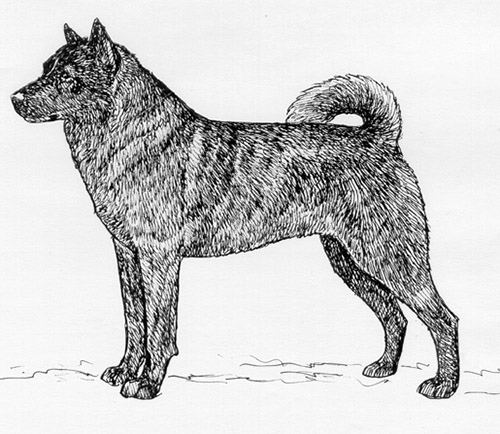