The Japanese Spitz is descended from the larger German Spitz dogs that were brought to Japan around 1920 via Siberia and northern China. In 1925, two pairs of white Spitz were imported from Canada, and for the next ten years more imports came from Canada, the U.S., Australia and China. The offspring of all these dogs were crossbred to create the breed that was recognized in 1948 as the Japanese Spitz.

The Japanese Spitz was recognized by the United Kennel Club in 2006.

The Japanese Spitz is an elegant, spirited and dignified breed that has prick ears, a high set tail that is carried curled over the back, and a sparkling white coat that stands off the body.

The breed is intelligent, cheerful and keen. They should not be noisy.

The size of the head balances in harmony with the body.

Moderately broad and rounded, the skull is widest between the ears. The forehead is moderately developed and the stop is defined.

The muzzle is pointed, with a slightly rounded tip. The lips are tight and preferably black.

The Japanese Spitz has a complete set of evenly spaced, white teeth meeting in a scissors bite.

Small, round, and black.

The eyes are moderately large, and almond to oval in shape. They are set slightly obliquely, and are dark in color, with black eye rims.

The ears are small, set on high, not too far apart and triangular in shape. They are pricked and face forward.

The neck is moderately long, with well developed muscles.

Straight, with firm, tight elbows, and slightly sloping pasterns. The presence or absence of dewclaws is immaterial.

In proportion, the body is slightly longer than tall in a ratio of 11:10. The chest is wide and deep and the ribs are well sprung. The withers are high and the back is straight and short. The loin is broad and the belly is well tucked up.

The hindquarters are muscular, well proportioned, and balanced.

The hind legs are parallel when viewed from the rear. There is moderate angulation at the stifle and hock joints.

The feet are cat-like, with thick, black pads, and nails that are preferably black.

The tail is moderately long, set on high and carried curled over the middle of the back.

Fault: Excessively curled (kinked) tail.
Serious Fault: Tail not carried on the back.

Double, with a short, soft and dense undercoat, and a straight outer coat that stands off the body. The face, ears, front of legs and rear legs below the hocks are short haired. The rest of the body is covered with an abundant long coat, especially on the neck, shoulders, forechest and tail.

Light, nimble, active, energetic and very smooth. Head carriage when the dog is in motion should be high and proud.

(A dog with a Disqualification must not be considered for placement in a conformation event, and must be reported to UKC.)
Unilateral or bilateral cryptorchid.
Viciousness or extreme shyness.
Albinism.
Ears not pricked. 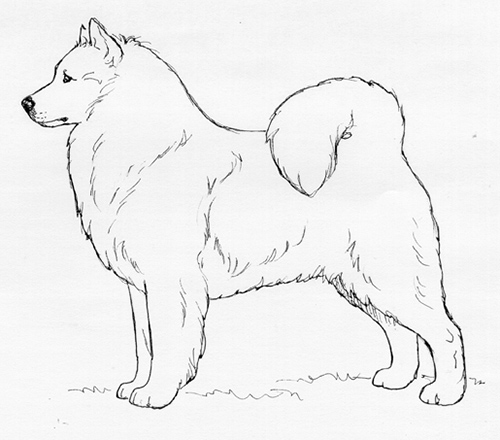