The Japanese Chin is a very ancient breed, believed to date back to at least 520 A.D. Held in high esteem and originally owned by only the Japanese nobility, they were introduced to the world by Commander Perry in the mid-1800s.

The Japanese Chin is a small toy-type dog with a broad face and a profuse coat. It is square in outline and presents an elegant and graceful figure.

Its expression is bright, inquisitive, alert and intelligent. It is a sensitive and intelligent dog, whose only purpose is to serve man as a companion. Responsive and affectionate with those it knows and loves, it is reserved with strangers or in new situations.

The head is short, broad and round, with a deeply indented stop.

The large, broad skull is slightly rounded between the ears, but is not domed. The forehead is prominent, rounding toward the nose, and wide across the level of the eyes.

The nasal bridge is very short and wide, with the nose set on a line with the eyes. The cheeks are well cushioned and the lips fully cover the teeth.

A full complement of strong, white teeth meet ideally in a level bite. Scissors or slightly undershot bites are acceptable. A dog with one or two missing or slightly misaligned teeth should not be severely penalized.

Faults: Overshot or wry mouths.
The Japanese Chin is very sensitive to oral examination. Since UKC judging procedure requires that the handler show the bite to the Judge, this rarely presents a problem.

The large, round, eyes are set wide apart. They are lustrous, and dark in color. A small amount of white showing in the inner comers of the eyes is a breed characteristic, giving the dog a look of astonishment.

The small, hanging, v-shaped ears are set wide apart slightly below the crown of the skull. When the dog is alert, the ears are carried forward and downward. They are well feathered and fit into the rounded contour of the head.

Rather short and upright, carrying the head high.

The elbows are set close to the body

The forelegs are straight and fine boned. Removal of dewclaws from the forelegs is optional.

The body is square. The chest is moderately wide. Ribs are somewhat rounded. The depth of the ribs extends to the elbow. The back is straight and the loin is broad and slightly rounded.

The rear legs are fine-boned and straight when viewed from the rear. There is a moderate bend to the stifle. Removal of dewclaws from the hind legs is optional.

The tail is set on high. It is carried arched up over the back and flowing to either side of the body.

The breed is single coated. The abundant coat is silky and straight. It has resilient texture and a tendency to stand out from the body, especially on the neck, shoulders, and chest areas, where the hair forms a thick mane or ruff.
The head and muzzle are covered with short hair, except for the heavily feathered ears. The forelegs have short hair blending into profuse feathering on the back of the legs. The rump area is heavily coated, and forms culottes or pants. The rear legs have the culottes and, in mature dogs, light feathering from the hock joint to the foot. The tail is profusely coated and forms a plume.

Acceptable colors include: black and white; red and white; and black and white with tan points. All are equally acceptable, and no preference is to be made in judging.
Red includes all shades of red (orange, lemon, and sable). Sable includes any of the shades of red intermingled, or overlaid, with black.
Tan points include tan or red spots over each eye, inside the ears, on both cheeks, and at the anal vent area if displaying any black.
A clearly-defined white muzzle and blaze are preferable to a solidly marked head. Symmetry of facial markings is preferable. Size, shape, placement, or number of body patches is not of great importance. The white is to be clear of excessive ticking.

The ideal height for males is ten inches; slightly less for females.

The Japanese Chin’s gait is elegant, light and proud. 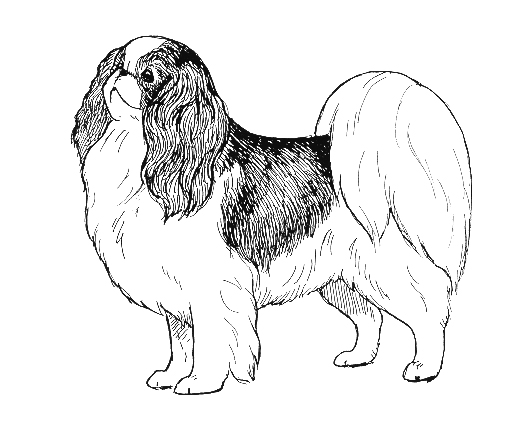