The Japanese Akitainu is one of the largest of Japans native breeds. It is a member of the Spitz family and originally used for bear hunting. However, at the end of the 19th century, the Japanese Akitainu was crossed with the Tosa-inu and European Mastiffs to increase the breed's size and value as a fighting dog. When dog fighting was prohibited in 1908, the Akitainu was preserved and improved as a large Japanese breed. During World War II, the breed was nearly lost with very few Japanese Akitainus surviving. After the war, an effort was again made to preserve the breed, focusing on dogs found in the Dewa and Ichinoseki lines. Akitainus of the Dewa line found their way to the United States and became the foundation for what is known as the American Akita, while the Ichinoseki line remained mostly in Japan and formed the foundation and restoration of the Japanese Akitainu. After decades of separate development and preservation efforts, today's Japanese Akitainus are recognized worldwide, yet they maintain close ties with their country of origin.

A large, well-balanced, sturdily built dog of the Spitz type.

Males and females are clearly distinguishable from each other. The ratio of length (from the point of the shoulder to the point of the buttocks) is slightly greater than the height (measured at the withers). Females are slightly longer; with males being more square.

The Japanese Akitainu is known as a dignified, quick and agile breed. Overall balance is very important. The striking coat color, coat color patterns, angled ears, eye shape and deep coloration of irises define the exotic look of this breed.

The Japanese Akitainu, is independent, smart and docile. It is also reserved, especially around strangers, which can give the impression of aloofness. They are loyal and highly protective of its family members.

The head is proportionate to the body. Skin is tight and not wrinkled. When viewed from the front, the head must look as though it would fill a circle. The fullness of the cheeks, as well as the coat on the cheeks and neck, contribute to this look. The forehead is broad and flat, with a distinct furrow extending from the stop to the top of the skull.

When viewed from the top of the head, the muzzle is round and full, tapering to a blunt triangle. The lips are tightly drawn and have dark pigment.

The Japanese Akitainu has a complete set of good-sized, evenly spaced, strong white teeth meeting in a scissors bite.

The nose is black. Flesh or liver-colored pigment is acceptable only on white dogs.

The deep-set, triangular shaped eyes are relatively small and slightly raised at the outside corners.

They are dark brown in color, the darker the better.

The wide-set, triangular ears are pricked and rather small in size, and rounded at the tip. They are thick and slightly cupped. Correct ears are angulated forward off the back of the neck, and area an extension of the angle of the neck.

The short, thick, muscular neck has a tight skin, and is in proper angle in balance with the head.

The shoulders are very moderately sloped forward, and developed. Adequate bone is essential.

Forearms are straight, Elbows are tight, turning neither in nor out. Pasterns are slightly slanted, with 15 degrees being the ideal.

The chest is well-developed. The rib cage is full. The tuck-up is well-drawn up.

The back is strong and level. The loin is muscular.

The hind legs are thick and well-developed, with a powerful grip, thrust and stance. The back legs are moderately angulated. The rear pasterns are straight when viewed from the side and rear.

The feet are round (cat-like). They are tight, well-knuckled, and have a firm grip.

The high-set, thick tail has a strong, thick root. It is well-curled over the back, When let down, it reaches almost to the hock. All of the following tail curls are acceptable: single, double, left, and right.

Eliminating Faults: Sickle tail. Uncurled tail (determined while the dog is in motion, not at rest).

The Japanese Akitainu is triple coated. The outer coat is a coarse, straight guard coat. The other two are under coats. One is thicker and somewhat soft, generally enhancing the coat color. The third is closest to the skin and is generally thicker and wool-like in texture.

Coat colors are clear and bright. Acceptable coat colors include: red; brindle, and white. Brindle is defined as a fine streaked or striped effect or pattern of black or tan hairs with hairs of a lighter or darker background color.

Brindles have the following basic colors in them: red, black, gray/silver, and white. All colors, except white, must have Urajiro (light cream or white markings or shading) on the sides of the muzzle, on the cheeks, on the underside of the jaw, neck, body and tail, and on the inside of the legs.

Gait is brisk, powerful and agile, conveying stamina. They are light on their feet. The dog will single track as speed increases.

(A dog with an Eliminating Fault is not to be considered for placement in a conformation event, nor are they to be reported to UKC.)
Long coat.
Sickle tail.
Uncurled tail (determined while the dog is in motion, not at rest).
Flat, splayed feet.

(A dog with a Disqualification must not be considered for placement in a conformation event, and must be reported to UKC.)
Unilateral or bilateral cryptorchid.
Viciousness or extreme shyness.
Albinism.
Overshot bite.
Undershot bite.
Pinto markings.
Black mask.
Dropped ears.
Speckled nose. 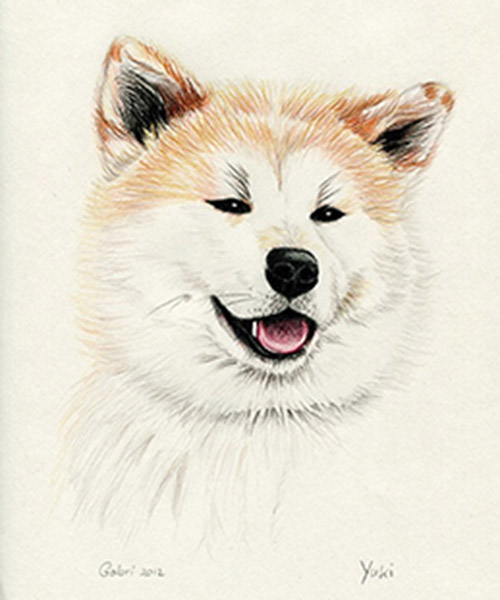