The Jagdterrier (German Jagdterrier, Deutscher Jagdterrier, German Hunt Terrier) is a comparatively young breed, having been developed only since the turn of the 20th century. The breed was developed in Germany as a functional hunting dog, and is used there on a wide variety of game, including wild boar, badger, fox and weasel. Imports into the United States and Canada have also been used by sportsmen as tree dogs, primarily for raccoon and squirrel.

The Jagdterrier was recognized by the United Kennel Club on January 1, 1993.

The Jagdterrier is first and foremost a hunting and sporting dog. Jagdterriers possess a spirit of liveliness and speed at work, yet are regal at rest. "Alert," "athletic" and "active" describes the ambience of the Jagdterrier. A bit of fire is always evident in its expression.

Physically, individuals should exhibit a square (though not broad) build, standing squarely and true over the feet. A deep and narrow chest allows the dog to easily enter dens. Leg length is in proportion to the rest of the body, avoiding both stubbiness or legginess. The tail is set fairly high and straight, and is gaily carried. The tail posture, while the dog is working, will be wayward and is not important. Though cropped, the remaining tail must be long enough to serve as a handle, should the hunter need to pull the terrier from a den. The coat may be either harsh or smooth; the important factor for coats of working terriers being that the coat must be thick and ample for turning briars and fangs.

All deviations from the standard that would affect the working ability of an earth dog are penalized in direct relation to their deviation.

Scars, the result of honorable wounds, are not considered faults and are not to be penalized.

This terrier breed is a clever hunter, unrelenting, tough, and robust. The Jagdterrier is unafraid of the most formidable wild game and very intent in the pursuit of such game. The breed is highly intelligent and affable with its master and other hunters. Considering its determination to work, and its combustible energy, the breed should not be selected strictly as a pet, though they are totally people friendly.

Dash, gameness and pluck are all descriptive of a properly bred Jagdterrier. The Jagdterrier, bred solely by hunters over its existence, has maintained the fearless characteristics of early day den terriers.

Elongated and wedge-shaped, with a slight stop.

Flat and wider between the ears than the Fox Terrier's, tapering towards the eyes.

Shorter than the backskull, with prominent cheeks and a very strong, full underjaw.

The small, dark eyes are deep set and have a determined expression. The eyelids are close fitting.

The nose is black, unless the dog’s main color is brown, when a brown nose is acceptable.

The v-shaped ears are not too small. They are set on high and carried lightly against the side of the head. The ears must be of adequate thickness to withstand work in briars and thickets.

The strong, rather arched neck is not excessively long. It broadens at the point of insertion into the shoulders.

The shoulders are long and sloping, well angulated with the upper arm.

The straight forelegs are well muscled. The bone is strong rather than fine. The pasterns are slightly slanted and flexible. Length of leg is one-half the height at the withers.

Chest is deep but not too broad. Ribs are well sprung and carried well back. Back is strong and level, not too short. Loin is well muscled, croup is flat. Length of body is slightly greater than height at withers.

The muscular hindquarters are well-angulated. The bone is strong.

Long and sinewy, with good angulation at the stifle and hock. Viewed from behind, the legs are straight and parallel. Hocks are well let down.

The well-knit feet are oval in shape. The front feet are frequently larger and wider than the hind feet. Cat-type feet are not acceptable.

The tail is usually docked, leaving about 5/8 of the original length. (It is better to take off too little than too much.) The tail must serve as a handle for hunters to pull the terriers from the dens. The tail is normally carried gaily in the manner of a foxhound, but also reflects a terrier's mobility, and can be in any posture while the terrier works.

Both smooth and harsh coats, or any texture in between, are acceptable, but the coat must be thick and abundant to turn briars, dampness and cold.

Serious Faults: Fine, silky-soft or short coat unsuitable for the rigors of a working terrier. Woolly hair. Open coat. Lack of hair on the belly.

The main body color may be black, black and gray, or dark brown, with brown, red, yellow or lighter-colored markings found on the eyebrows, chest, legs and anus. Both light and dark colored masks are acceptable.

A small amount of white on the chest and toes is acceptable.

Because they are den dogs, Jagdterriers must not be too large to enter a varmint burrow nor too small to defend themselves in a confrontation with their quarry.

Height, measured at the withers, must not be less than 13 inches nor greater than 16 inches.
The ideal working weight should not be under 16 pounds nor over 22 pounds, the bitch being generally lighter than the dog.

Terriers were often required to run with the hounds, being there to bolt the quarry should it go to ground. Thus, their gait is more gallop than trot. This requirement remains for the Jagdterrier. They should have galloping power and the tendency to a smooth gallop at fair speed when at liberty. At a trot, the gait should be free and parallel, with good reach and drive. 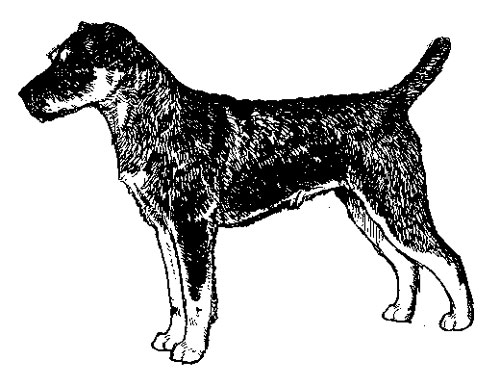