Intelligent and affectionate, but sensitive and may be reserved with strangers.

The same length as the skull and tapering. The lips are thin and tight, with darkly pigmented edges.

Expressive, medium size eyes are dark in color and have pigmented eye rims. However, pied, white, white-face or split-face dogs are not to be faulted for lack of full eye rim pigmentation.

Dark, preferably black, but may be brown or blue in harmony with the color of the coat.

The small, delicate, rose ears are fine in texture. They are thrown back and folded, except when the dog is alert, when they are carried at right angles to the head.

Long, slender and slightly arched. No dewlap. Ewe-neck is undesirable.

The shoulder blades are slightly sloping and form an open angle with the upper arm. The muscles are lean.

The medium length body is short coupled, with the extra length being in the rib cage. The chest is narrow, deep and let down as close to the elbows as possible. The withers are high. The topline shows a slight rise, with the highest point at the start of the loin, dropping harmoniously into the sloping croup, creating a definite tuck-up at the flanks.

The hind legs are long and parallel when viewed from behind. The thighs are long and lean with distinct muscling. The stifle is well bent. The hocks are well let down.

The slender tail tapers to a curved end; it is long enough to reach the hock. It is set and carried low.

The short, glossy, satin-like hair is fine in texture and soft to the touch. The skin is fine and supple.

All colors and markings are acceptable except for the following (which are disqualifications): brindle markings; tan markings, such as those usually found on black and tan dogs of other breeds.

Disqualifications: Albinism. Brindle markings. Tan marking, such as those found on black and tan dogs of other breeds.

The ideal height at the withers measures from 13 to 15 inches.

Serious Fault: Any deviation above or below the height range.

(A dog with a Disqualification must not be considered for placement in a conformation event, and must be reported to UKC.)
Unilateral or bilateral cryptorchid.
Viciousness or extreme shyness.
Albinism.
Brindle markings.
Tan marking, such as those found on black and tan dogs of other breeds. 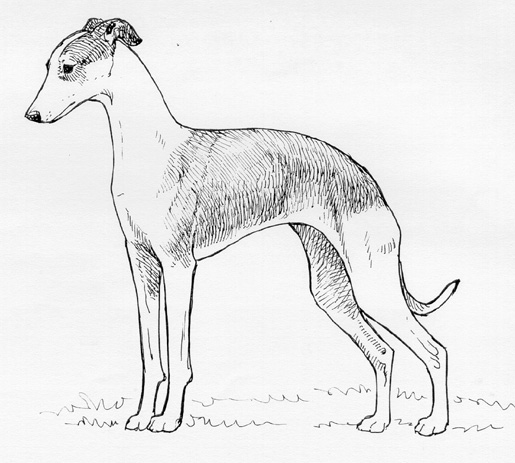