The history of the Coarse-Haired Hound in Croatia parallels that of the Smooth-Haired one, though pictorial representations and written descriptions are rare because artists did not favor the tousled outline of the Coarse-Haired breed. They are as equally well suited to fox and hare hunting as their smooth coated cousins.

The Istrian Coarse-Haired Hound was recognized by the United Kennel Club in 2006.

Gentle, docile, calm and very attached to its owner, the Istrian Coarse-Haired Hound is nevertheless a very enthusiastic hunter.

The skull is slightly rounded. The occiput is well developed, and the frontal bone is quite broad. There is a frontal furrow that is often covered by a lock of long hair. The skull narrows in width from the ears to the eyes. The stop is not pronounced.

The muzzle is strong and rectangular. The bridge is covered by a shaggy mustache. Seen from the front, the lower jaw gives the muzzle a certain roundness.

The Istrian Coarse-Haired Hound has a complete set of evenly spaced, white teeth meeting in a scissors bite.

Broad and well developed, with black or dark brown pigment.

The eyes are large but not bulging. They are dark in color. The expression is serious.

The ears are not very thick. They are covered with shorter hair. They are set on at about the topline of the skull. They widen towards the middle, and are carried close to the cheeks. They should be semi-long, reaching at least to the superciliary arches.

The neck is arched, with taut skin and no dewlap.

The shoulder blades and upper arms are long and sloping, forming an angle of nearly 90 degrees.

The legs are upright and well muscled. The pasterns are short and slope no more than 10 percent off the vertical.

The body is approximately 10 percent longer than tall. The chest is broad and well let down, at least to the elbows. The forechest is rounded, with no prominence of the point of the sternum. The ribs are well sprung. The withers are only slightly pronounced, and the topline slopes gently from the withers to the tail. The back is level and broad, and the loin is short and arched. The croup is broad, rounded and slightly sloping.

Set not too high, strong at the root and tapering to the end, which reaches to the hock or just below. Carried somewhat low, in saber fashion.

The outer coat is harsh, fairly long, dull and bristly. It is never curly or wavy. There is a short, thick undercoat which is dependent on climate and season. The length of the outer coat will vary on different parts of the body.

Disqualification: Any color other than white and lemon-orange.

Ideal average weight is about 44 pounds.

(An Eliminating Fault is a Fault serious enough that it eliminates the dog from obtaining any awards in a conformation event.)
The presence of any third color, even if it is just a few hairs.
More than one inch over or under the heights prescribed in the standard.

(A dog with a Disqualification must not be considered for placement in a conformation event, and must be reported to UKC.)
Unilateral or bilateral cryptorchid.
Viciousness or extreme shyness.
Albinism.
Undershot or overshot bite.
Blue eyes.
Any color other than white and lemon-orange. 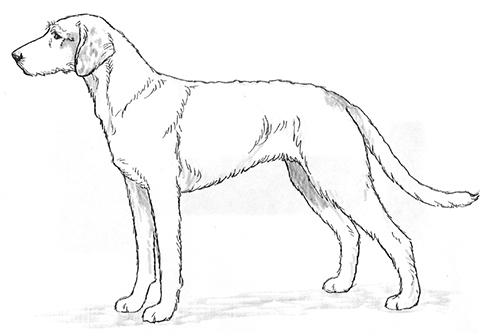