The Irish Terrier is one of four terrier breeds developed in Ireland, and it may be the oldest. He was a dog of the common, used as an all around farm dog and hunter. Originally, there were black and tan and brindle, as well as red, Irish Terriers, but by the 20th Century, the breed was only red in color.

The Irish Terrier was the first breed to be recognized by the English Kennel Club as a native Irish breed. During the First World War, they were used as messenger dogs during trench warfare, proving their intelligence and usefulness.

The Irish Terrier was recognized by the United Kennel Club in 1932.

The Irish Terrier combines speed and endurance with power. He must be strong, yet lithe and graceful, and present a rather racy outline. He is neither cobby nor cloddy in build.

The breed is extremely loyal and affectionate with people. He will fight with great courage when attacked, but is easily trained, even tempered and a gentle pet.

The head is long and clean, with a barely perceptible stop.

Flat and fairly narrow between the ears, tapering slightly towards the eyes.

Long, strong and muscular, without fullness of cheek.

A full complement of strong, even, white teeth meet in a close scissors bite.

Small and not prominent, dark brown in color. They show an intense expression full of life, fire and intelligence.

The nose must be black.

The small, V-shaped ears are of moderate thickness. They are set well on the head, dropping forward closely toward the cheek. The top of the folded ear is well above the level of the skull. The hair on the ears is shorter and somewhat darker in color than the hair on the body.

The neck is of fair length, gradually widening toward the shoulders. It is well and proudly carried. Free from throatiness. There is usually a slight frill in the hair at each side of the neck, extending almost to the corner of the ear.

Shoulders are long, clean and sloping. Elbows have free action.

Chest is deep rather than wide, extending to the elbows. The body is moderately long. The straight, strong back is free from any appearance of slackness. Ribs are deep and only fairly sprung, but carry well back. The strong, muscular loin is slightly arched. Females may be longer in loin than males.

Moderately bent at the stifle, with hocks close to the ground.

Moderately small and rounded, with well-arched toes and black toenails. Free from cracks or corny excrescence.

The tail is of fair length; it is customarily docked with about one-third being taken off. It is set on rather high and is of good strength and substance.

The coat is dense and wiry in texture. It has a broken appearance, but still lies close to the body. The hairs grow so closely and strongly together that, when parted with the fingers, the skin is hardly visible. The coat is free of softness or silkiness; it is not so long as to alter the outline of the body, particularly on the hindquarters. The hair on the sides of the body is not as harsh as the hair on the back and quarters, but is plentiful and of good texture. At the base of the stiff outer coat there is an undercoat; a growth of fine, soft hair which is lighter in color. The hair on the upper and lower jaws is similar in quality and texture to that on the body. It is of sufficient length to present an appearance of additional strength and finish to the foreface.

The legs are free from feathering and are covered with hair of a similar texture to that on the body. The tail is well covered with harsh, rough hair.

Serious Faults: Single coats, without undercoat. Wavy coats. Curly and kinky coats are the most objectionable. A profuse, goat-like beard.

The Irish Terrier is whole-colored (of one color); Red, red wheaten or yellow-red. A small patch of white on the chest is permissible but not desirable.

Serious Fault: White on any other part of the body other than a small patch of white on the chest.

Ideal height for both males and females is approximately 18 inches.

Ideal weight for males is 27 pounds, for females 25 pounds.

Front and rear legs move straight forward when traveling. Stifles turn neither in nor out. 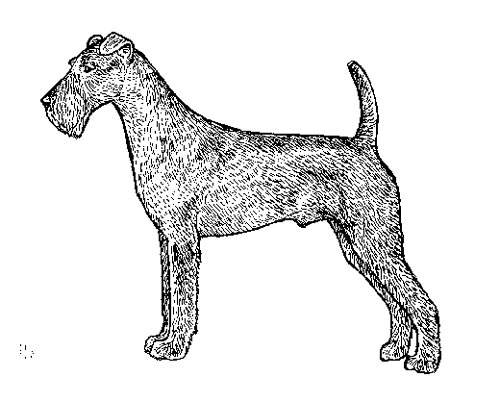