The Irish Setter is a working gun dog that was developed in Ireland. The breed was probably developed by using a combination of spaniels, other setters, pointers and the Irish Terrier. At first, Irish Setters were in the same family with the Irish Red and White Setter, but they were separated into an individual breed in the early 1800’s. Over a period of time the breed was split between field and show dogs, but today an effort is being made to bring the field ability and the beauty of the Irish Setter together.

The Irish Setter was recognized by the United Kennel Club in 1914.

An upstanding, active dog of mahogany or rich chestnut color, substantial yet elegant, and always exhibiting balance whether standing or moving.

An energetic dog, friendly and intelligent. The breed’s rollicking personality is a defining characteristic.

Lean and long, its length is at least double the width between the ears. Well-defined stop halfway between the well-developed occiput and the tip of the nose, and the toplines of the skull and muzzle lie in parallel planes.

Somewhat almond-shaped and of medium size, placed rather well apart, dark to medium brown in color. Expression is soft, but keen and alert.

Black or chocolate with wide nostrils.

Set well back and low, nearly long enough to reach the nose, lying close to the head. Leather is fine.

Strong, but not thick. Moderately long, slightly arched and free of throatiness. Fitting smoothly into shoulders.

Chest deep, reaching approximately to the elbow, rather narrow in front with moderate forechest. Shoulder blades long and sloping well back, fairly close together at the tips.

Sufficiently long to permit a straight and free stride. Ribs well-sprung. Loins of moderate length. Topline of body slopes slightly downward from withers to set on of tail.

Hindquarters should be wide and powerful with broad, well developed thighs.

Hind legs long and muscular from hip to hock, short and nearly perpendicular from hock to ground; well angulated at stifle and hock joints, which like the elbows, incline neither in nor out.

Strong at root, tapering to a fine point, nearly long enough to reach to the hock. Carriage straight or curving slightly upward, nearly level with back.

Short and fine on head, front of legs and tips of ears. On the rest of the body and back of legs, it is of moderate length and flat, as free as possible from curl or wave. Feathering long and silky on ears and long and fine on back of legs, and a nice fringe on belly that extends to brisket and chest.

Rich chestnut red or mahogany, with no trace of black. A small amount of white on the chest, throat or toes not to be penalized. However, the smaller amount of white, the better.

The ideal is 27 inches and 75 pounds for the males, and 25 inches and 65 pounds for females. Overall balance and proportion is more important than size, though variances of more that one inch up or down are discouraged.

At a trot the gait is big, lively, efficient and graceful, with a high head. The hindquarters drive smoothly with great power. The forelegs reach well ahead as if to pull the ground. Crossing over or weaving is objectionable. 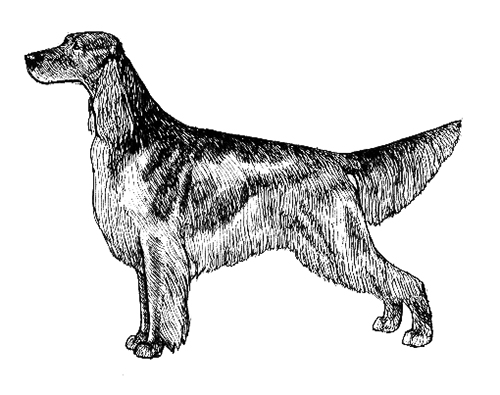